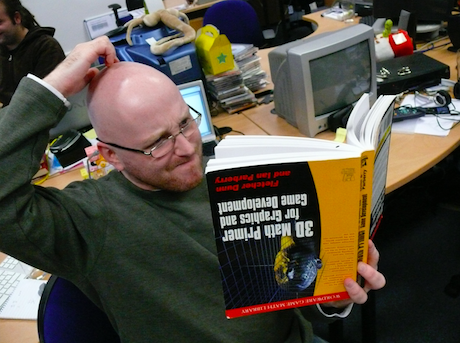 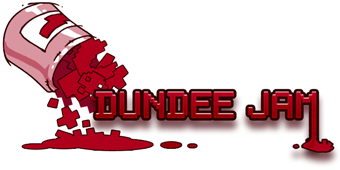 Yesterday I took part in the first Dundee Jam event organised by Ian Kiigan of Denki. The idea of the event was to assemble a room full of programmers and artists and for each programmer, with the aid of an artist, to create a game in a day. The first event was by invite only and consisted of 7 members of Denki, 2 non-members (myself being one of them) and 1 complete stranger.

Held in Denki’s offices in the centre of Dundee it was a very interesting and fun day. Things kicked off at 10am with a quick chat over a cup of tea to go over ideas and for the artists to choose what projects they were going to work on.

Everything started off in a relaxed mood, getting ideas and laying out basic visuals. I was working on a food based puzzle game and the first thing was to try and create some graphics for the main icons in the game and to try and conceptulise the background illustration. One of the main features of our game was that the falling pieces were effected by physics and won’t stack up as per a normal puzzle game so it was going to be possible to ‘shake’ the pieces (like nudging a pinball table) to move them around a bit.

My original idea for this was to have the play area as the inside of a soup bowl and have it held in a hand going into the screen, however when a got the placeholder graphics from Stewart (the game programmer) it was apparent that the play area was going to have to be bigger. A quick change of track and I decided to have a big soup pot being held by a chef, who would shake it when asked.

By 1pm all the food bits were drawn and it was time for lunch. Pizzas all round then.

After lunch i started on the background elements and drawing the chef. By 2pm I had a basic outline and place holder graphics done so that Stew could place them and we could check the positioning of everything. 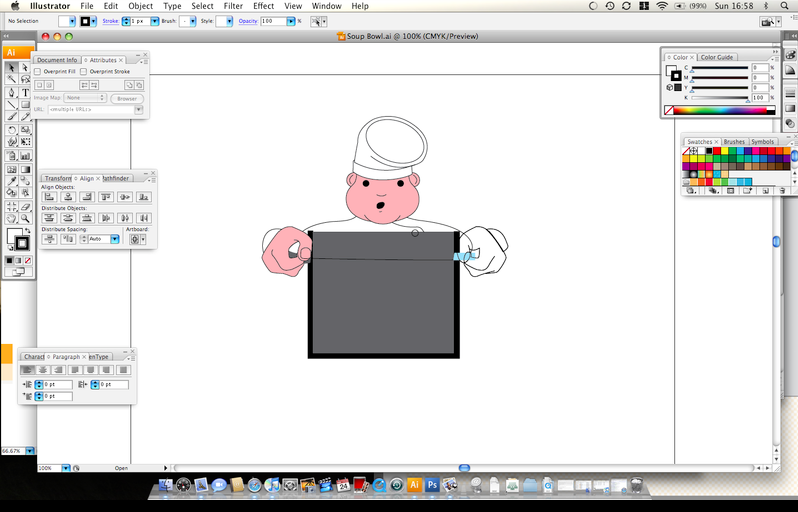 Pressure was starting to build now and Stew was working quickly to try and make a game out of his idea and I was beginning to look at the other games and noticing how quickly and competently the other Denki artists were knocking out graphics for their games.

6pm was our deadline and I had figured that if i took 2 hours to work up my background idea then it left 2 hours to tweak and polish as well as getting a front screen with instructions etc done. I had to adjust some of the game graphics as well so they were more obviously selected.

With all this done the time was sitting at 5.30 and Stew had put together a title screen which, while functional, was not the prettiest. I had just enough time to do a quick logo and layout for an alternative title screen before the clock struck 6.

All computers off and games complete there was just enough time for a quick play before heading out for a few beers.

While it was great fun and all the games turned out very well I am left with a yearning to carry on the development… What if the chef was animated and get stressed as the pieces stack up? What if the pot was full of soup stock and the bits splash in? What if I had time to design all the type and onscreen display?As it is the game is great, Stew worked himself nearly into the ground and I had helped make my first video game. Success. 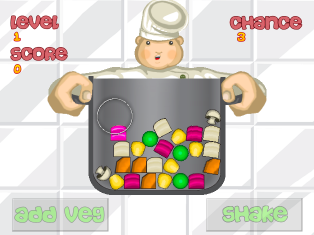 You can play all the games created on the day by visiting Dundeejam.com. They will all work on a PC only except Astro-Chu which is a Flash game and will work on any Flash enabled web browser.

My thanks to Ian Kiigan and all those at Denki that made this event possible and I am looking forward to seeing the output of future event.

There are plans to open the next event up to all who are interested, keep an eye on Dundeejam.com for more info.