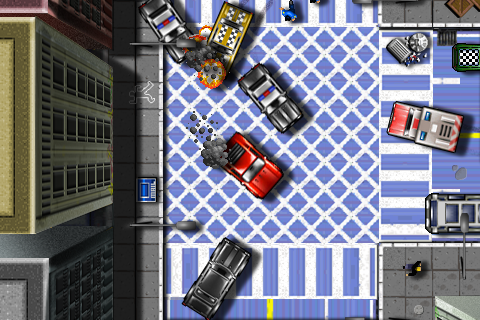 I am a huge fan of the original Grand Theft Auto, with it’s simple top down car stealing fun. Something I have never felt the newer 3D versions could quite replicate.

So, when I heard that Dundee based Tag Games, some of whom worked on the original games back in the DMA glory days, were creating a similar product called Car Jack Streets to be launched on mobile devices I got quite excited. However, when it came out last year I had upgraded to a shiny new iPhone and the game was only available on more traditional handsets.

My annoyance was confounded further by the fact that the game went on to receive glowing reviews and praise from nearly everyone that played and reviewed it! Tag have, however, just announced that Car Jack Streets is arriving imminently on the iPhone and iPod Touch and with 2.5D Cartoon style graphics, accurate day/night cycles, real-time missions and online scoreboards – this version looks to be the best yet! over the world providing the games 24 tracks of music. You will also be able to purchase, rate and share these tracks via iTunes.

Paul Farley, managing director of Tag Games said “When contemplating the soundtrack for Car Jack Streets, we thought about adding links to iTunes so players could download the tracks for their personal music library but then we thought it would be the perfect opportunity for some unsigned talent to get noticed. The best new games console, the best game-play and the best emerging talent. It’s the perfect combination!”

The full list of artists featured in the game are:

The trailer should be viewable above, if not you can follow this link to Youtube.
You can also follow TAG Games on Twitter.
Car Jack Streets is currently available for all J2ME compliant mobile phones and is coming soon to the iPhone and iPod Touch by the end of March 2009.
Join AMPS