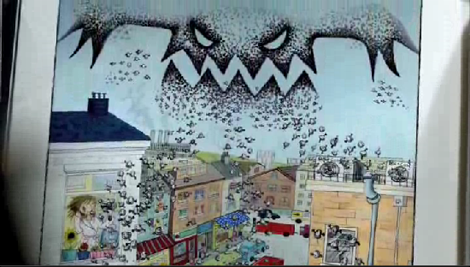 Dundee based illustrator and previous CD Talent Show featuree (my new word for today) – Lindsey Gardiner has recently completed work on a commission for the Governments new Act on Co2 ad campaign which was produced by London based media agency Abbot Mead Vickers (AMV BBDO).

Lindsey, who writes and illustrates children’s books ‘Poppy and Max’, was asked to create illustrations for a children’s book to be used to highlight the effects of Co2 on a future earth which were then later animated and combined with filmed footage. The advert has been courting a little controversy recently with people suggesting it is too scary for children and featured on the BBC Breakfast news on Saturday.