Dare ProtoPlay is Scotland’s biggest video gaming event, taking place over 3 days in August each year. This year Dare ProtoPlay was held in Dundee where the Dare to be Digital 2011 winners were announced.

Dare to be Digital is a video games development competition for talented students at Universities and Colleges of Art, across the world. Teams of students develop a prototype video game over 9 weeks during summer time and receive mentoring from industry. The prototype games are then played and voted for by the public. This year’s winners include:

Digital Knights, Evolved Ape and Swallowtail will now compete for the exclusive BAFTA ‘Ones to Watch’ award.

A very well done to all the teams who took part this year! 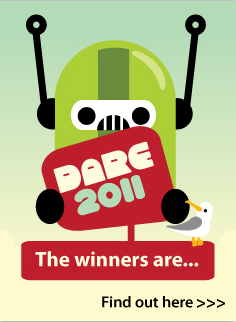