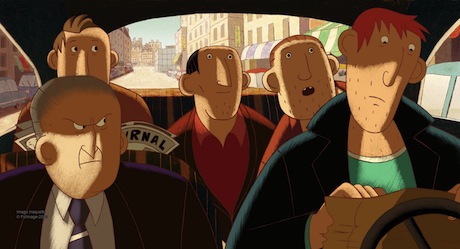 A Cat in Paris

The Discovery Film Festival is back to the DCA this year, from: 22 October until 6 November 2011.

Although it’s best known as being ‘Scotland’s International Film Festival for Young Audiences’, this festival isn’t exclusively for young people and it’s well worth a look for us more mature types too.

Having spent many a weekend during past festivals watching back-to-back films which take on a great range of subjects, from the extremely tough to the touching and amusing; this festival is a great celebration of international discovery, through film.

The full programme has screenings, workshops and talks by producers; and the nice thing about Discovery is that they have young ambassadors who select the films for the festival and then take part in events, tours and talks during the festival. If you are a wee bit concerned that the cinema will be packed with pupils from across our fair land, fear not, there are separate screenings for schools trips.

The animated shorts will be, as always, top of our list; but the dramatic pre-WWII Canadian and Czech Republic film, ‘Inside Hana’s Suitcase’ looks well worth a look also. Others hotly tipped include, Spielberg’s ‘The Adventures of Tintin’ (hmm, Tintin’s Unicorn is quite like Dundee’s own Frigate?); and the festival’s opening film, ‘A Cat in Paris’ – lovely looking animation about a cat who has a double life… and lives in Paris – quelle surprise!

Creative Dundee is looking forward to speaking at the workshop: From Blogs to Tweets, so perhaps see you then!

Tickets can be booked via the DCA’s site and you can keep up to date with the festival on Facebook.