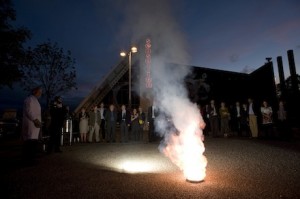 Pic Alan Richardson Dundee Pix-Ar.co.uk
David Warton sets the festival on it’s way with chemical fireworks
From robots, trees and rockets to hair and outer space, Dundee is set to be ignited with the biggest and best Dundee Science Festival ever. Now in its third year, the fortnight-long festival (Saturday 29 October â Sunday 13 November 2011) is set to explore the fun, excitement and relevance of science to all, with over 60 events,Â  twice as many as last year, more partners and a diverse range of over 25 venues. The festival was launched in a blaze of sparks and explosions last night (Thursday 29 September 2011), as David Wharton, local scientist, wowed the crowd with a taste of things to come. As well as universities, schools and public spaces, events will be held at a coffee shop, hairdressing salon, Dundee Contemporary Arts, bars, Overgate, Botanic Garden and The McManus. The festival will also include two free family fun days at Dundee Science Centre during the first and last Sunday of the festival.