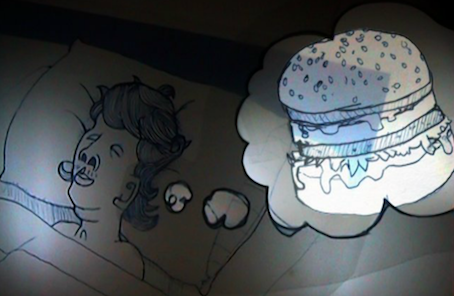 With very clever 3D zoetropes, an impressive showreel and lo-fi but equally great music videos; animator Graeme Hawkins is definitely one to watch, again and again.

Like many other animation graduates, Graeme was attracted back to Dundee in 2008 by the opportunity to work on Sylvain Chomet’s beautifully animated film, The Illusionist. Although set in Edinburgh, much of the excellent animation work was done on our own city centre doorstep.

Once the film was complete, Graeme was out of a job, but decided that it was the perfect time to give freelancing a go. So, two new ventures were born, Retchy for his experimental work; and he joined the freelance collective Amphibian Animations for his more commercial work, alongside fellow animators Garry Whitton, Gareth Allen and Neil McDonald

Graeme graduated from Animation from DJCAD back in 2002; took a break from animation for a while before heading to Norwich University College of the Arts, where he completed an MA in Animation and Sound Design. Graeme really values his time there and credits his tutors’ great enthusiasm and encouragement as helping him stay motivated during the last three years, since graduating.

On animation, Graeme says: “I love experimenting with techniques and technology (both new and old) and coming up with unusual looking pieces, based around those experiments. It often takes a while for something ‘finished’ to come from these tests, but animation is rarely quick to produce, so I take pleasure in the process of gradually discovering the best ways to exploit a certain technique or idea.  I think this approach probably comes from my reluctance to actually do proper animation – I don’t have the patience to draw every frame the traditional way, although it’s sometimes unavoidable I guess.”

“I also dislike the mystery sometimes associated with the techniques behind certain animation styles.  If Jim Le Fevre (BAFTA award winning animator) hadn’t very generously taken the time to explain his 3D Zoetrope technique to me, I probably would’ve figured it out eventually (maybe), but we wouldn’t have had the great back and forth about ideas that we did.  So I always try and explain my processes when I post on my blog, so that other people can try it out for themselves if they want to; and hopefully push it forward and come up with interesting new ways of doing it. I’m always happy to answer questions via email too.”

Currently working with the Scottish Dance Theatre, based at Dundee’s Rep Theatre; Graeme is creating projections for a children’s performance piece called What On Earth!?. Scheduled for April 2012, the piece is choreographed by SDT’s Sally Owen and Janet Smith.

Working from his flat in the heart of the city centre, Graeme shares this nice cozy creative space, laughs and coffee, with girlfriend Petra, who runs her crochet business from there too. Another frequent visitor of their living room studio is fellow Amphibian, Garry Whitton. 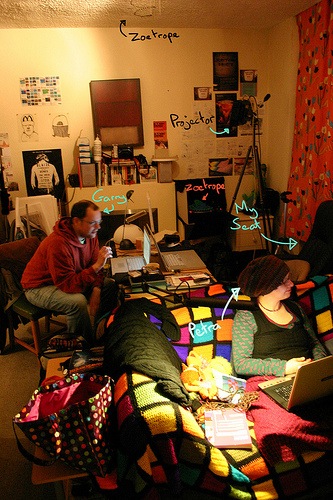 Asking Graeme what the benefits of freelancing in Dundee are, he says: “I think the advantage is that there doesn’t seem to be a whole load of other people doing it, so there’s less competition for local business; but having said that, there’s not that much local business, so it’s probably just as hard as doing it anywhere else.  I think at least half of our jobs have been in and around Dundee though – the internet’s great, but like I said, there’s far more competition.  Best to keep it local, face to face, and not in London, I reckon.”

“I’m also involved with the art-music night Guerrilla Gallery, a regular-ish night that encourages local creatives to submit their work for projection on the night, along with live music and other interactive stuff, and it has really opened my eyes to the wealth of creativity going on in Dundee, and it’s great to be a small part of that.”

Whether amphibian animation or mammal Retchy, we’re pretty sure that Graeme is going to be a big part of the city’s creative eco-system in the future!