Creative Dundee – the story so far… 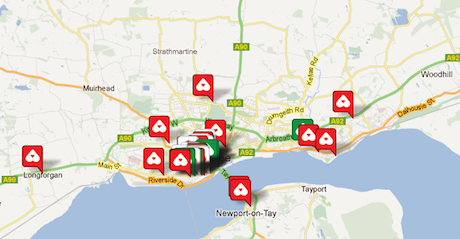 Hello and Happy New Year to you!

Getting into the swing of 2012 with a refreshed head, I thought I’d share the ride over the last 5 months since we re-launched Creative Dundee, jam-packed full of interesting times and people; and think about creative collaborations for the year ahead.

Last summer I eventually set my (ahem) mid-year resolution: to do something more creative with my spare time and to use my skills to benefit my home city.

Came from being frustrated when speaking to people about creativity in Dundee, that I’d hear back either a) ‘there’s nothing happening in Dundee, you need to go to Glasgow/ Edinburgh/ London for that job/ person/ opportunity/ event/ company’ or b) ‘Games and bio-tech, know of them… not sure about anything else…’

Unfortunately these views haven’t always been from people outwith the city; so whilst biting my lip and/or fighting my corner, I knew they could perhaps be forgiven for thinking this, as the city hasn’t yet succeeded in how it showcases Dundee’s breadth of interesting creative talent. So rather than join a whinging committee, it felt the right time for me to try and help change and improve these perceptions.

Myself and co-founder Lyall set up CreativeDundee.com up back in 2008, but it went down a road neither of us really intended and as a result was sadly unloved by all involved.  We decided that rather than reinvent the wheel, we’d give the site a complete rethink, redesign and overhaul. And after much creative tinkering and signing up to be the Pecha Kucha Night official hosts in Dundee, we re-launched at the end of August 2011.

To make sure the new site stayed on track, we set some pretty simple and clear values and ambitions – To create a platform to showcase, promote and connect talent across the creative sectors, from Dundee and the surrounding area – and as part of this I’m paying more attention to our audience wants and needs in a far more ‘business like way’ than I ever did before!

So to be useful and used, we knew the site had to be created and maintained by creatives in a grass-root up way, rather than an organisation top-down way, which might risk it becoming politicised or un-creative; and in the last 5 months we have just been amazed by the support for Creative Dundee! We’ve had some great contributions to the site, attendees at events and have attracted equally great regular bloggers.

Putting together the pieces…

Initially we weren’t sure what else Creative Dundee was, beyond a website; but it was pretty clear by immediate feedback that Creative Dundee could offer a programme of events for creatives; and be a platform for people to create their own opportunities and events under the Creative Dundee umbrella.

And so far we’ve hosted the first Pecha Kucha Night in Dundee – a regular networking night and held a Creative Dundee Office Christmas Party – for creatives who don’t get the chance to have Christmas nights out… both events have been well attended and received really positive feedback, it really keeps us going so thank you again and again!

We have some exciting partnerships, collaborations and events to unveil this year, the first of course will be the next PKN night in Feb – more on this in a few days time.

But as we do this in our spare time out of love for creative stuff and our city, we can’t and don’t want to do it alone! We’re always looking for interesting content, bloggers and people to collaborate with – people who share our values and can help bring together people from across the creative disciplines under one roof, both virtually and physically.

This year promises to be an exciting one for the city – it’s already feeling like the year for creating your own opportunities and collaborating with other people to maximise skills, expertise, money, audiences etc etc. I’ve learned a lot in the last few months and its made me even more determined that we can’t just wait for stuff to happen, collectively we can do amazing things and really genuinely shape our ecosystem and creative city.

So whether you are a creative, student, non-creative, practitioner, business, supporter, academic or someone interested in Dundee’s creative future, thanks for your support and we look forward to working with you even more this year!