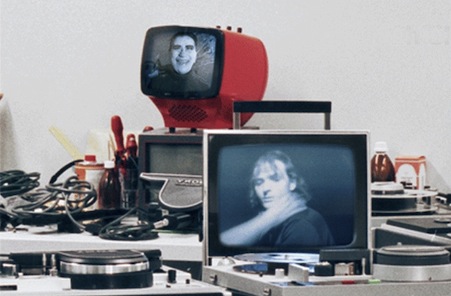 Recording devices have a limited life span – cassette tapes, minidiscs, floppy disks and video tapes are just a few of the mediums that have been used widely over the last decades, usually superseded by the next big thing.  Video Art was one of the most influential art forms of the 20th century and it is a challenge to ensure historical archives can be restored, maintained and enjoyed today.

This exhibition Record>Again, is the second phase of a remarkable project 40jahrevideokunst.de, initiated by the German Federal Cultural Foundation in 2006. Five leading German museums have worked in collaboration to save, preserve, restore and show work, which hasn’t been seen for decades.

Featuring over 40 outstanding video pieces made between 1968 and 2008, many were considered untraceable, lost or no longer playable. Exhibition highlights include a rare work by renowned international video artist Ulrike Rosenbach with her partner at the time (and pioneer of German video art) Klaus vom Bruch; also the boxing match from 1972 which artist Joseph Beuys participated in at the Documenta 5 exhibition, and the first video synthesizer collages by Walter Schröder-­Limmer.

To accompany this exhibition, an In-­‐conversation event will take place at the Visual Research Centre of DJCAD; the home of the REWIND* research project. Featuring researchers, curators and artists from Germany and Britain, this discursive event provides a unique opportunity to scrutinise the histories of the video art movement in both countries and to unpack the propositions, approaches and outcomes of these two prestigious historic European research projects.

*The REWIND: Artists’ Video in the 70s & 80s research project at Duncan of Jordanstone College of Art & Design focuses on video works of the 1970s and 1980s to provide a resource to address the gap in historical knowledge of the evolution of electronic media arts in the UK.  http://www.rewind.ac.uk