We Are Northern Lights! 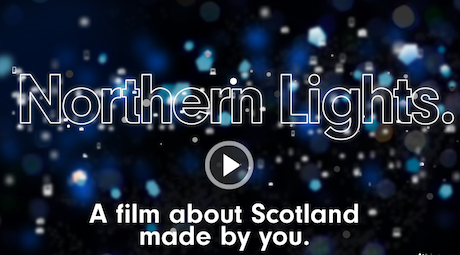 You’re invited to collaborate on a unique feature-length documentary film all about Scotland. Northern Lights is a first in a lifetime mass participation film project, which aims to reflect the lives, hopes and dreams of the people who live – or once lived in Scotland.

This mass collaborative project, funded by Creative Scotland is now open for submission until 21st June 2012. With a simple submission process, anyone is eligible to submit videos – the only restriction is that the footage must be shot in, or be about, Scotland.

The footage will then be edited into a feature film by director Nick Higgins; toured around Scotland and screened within the communities who made the footage.

The Northern Lights team are keen to receive filmed contributions from people of all backgrounds and ages, across Scotland, to answer three questions:

This is a great opportunity for first-time film-makers and experienced film-makers to plan and shoot their footage. With a heap of resources on their website to assist you, there will also be workshops being run across Scotland too.

The film will be directed by award-winning documentary film-maker Nick Higgins, who hopes to be surprised by the range of responses to the three questions. He says:

“The idea of inviting people from across Scotland to pick up a camera, film their Scotland and share their lives is hugely exciting to me and we’ve tried to make it as easy as possible for everyone to get involved. Our aim is to create a truly original representation of Scotland, taking in everything from the extraordinary to the everyday.”

Visit the website to find out more and watch contributions: www.wearenorthernlights.com

We look forward to Dundee and the surrounding area being well represented in the final cut!!