From the edge to being a world leader! 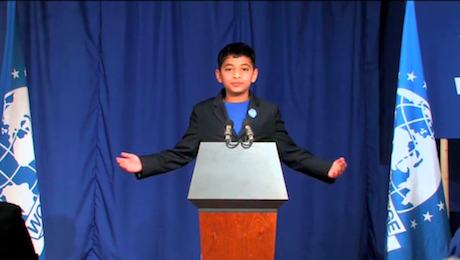 DashnDem – Imagine Being a World Leader, 2008, video still, courtesy of the artists

This autumn DCA has two complementary exhibitions by UK-based artists, which focus on the perspectives of young people. ‘Imagine Being a World Leader’ by DashnDem, and ‘From the Edge’ by Nikolaj Bendix Skyum Larsen run from Sat 8 September – Sun 18 November 2012.

Imagine Being a World Leader –

British artists Dash Macdonald and Demitrios Kargotis met at the Royal College of Art and since then they’ve been working together under the name DashnDem. Now based in Birmingham, they use performance, creative public experiments and lots of wit to explore social and political issues.

‘Imagine Being a World Leader’ is a fictional political event to coincide with the run-up to the American presidential elections, to enable local young people’s voices to be heard and expose the methods and techniques used by politicians. DashnDem have been working with Blackness Primary School, teaching pupils leadership and public speaking techniques and the end results will form the inspiring, funny and thought-provoking content for the exhibition!

Nikolaj Bendix Skyum Larsen has a great name. He’s also a Danish artist, who lives and works in London and is exhibiting three film pieces at the DCA.

‘Tales from the Periphery’ is a pair of films exploring the lives of young people living in deprived areas of Europe. Nikolaj spent months living in Saint-Denis, Paris, and in Gellerupparken, Aarhus in Denmark – both areas are often associated with crime and unemployment. Nikolaj worked with teenagers, encouraging them to film themselves to show a different side of their lives.

In ‘Rendezvous’, Nikolaj follows the rarely-explored lives of a group of migrant Indian workers in Dubai and sets this footage against images of their families, who still live at home in Kerala. These expatriate labourers are generally hidden away from the image of a prosperous society that is projected in the United Arab Emirates, Nikolaj positions them in the foreground, giving them not only a face, but a further context that exposes both the conditions that brought them there in the first place and the system that often keeps them there indefinitely.

And finally ‘No Place Like Home’ is an experimental documentary which explores the vast desert areas surrounding Dubai, one of the world’s fastest developing urban areas.

These exhibitions are a neat tie in with the yearly Discovery Film Festival, which takes place: Sat 20 October – Sun 4 November 2012 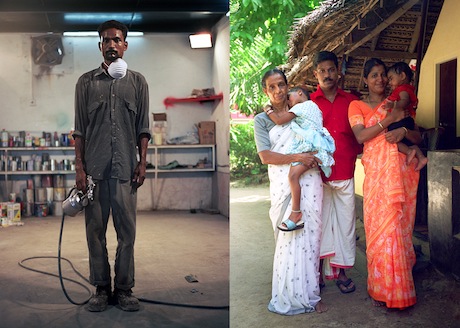