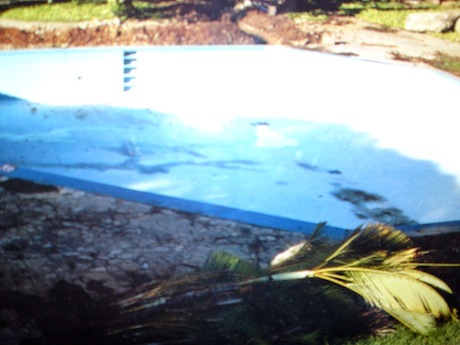 Surplus Cameo Decor is Edgar Schmitz’ first solo exhibition in Scotland. Expanding on recent works that explore how best to withdraw from the present, Schmitz will install a series of ambient backdrops in Cooper Gallery that turn the space into a semi-fictional hub for cinematic plots and invited cameo appearances.

The exhibition is organised in three episodes:

episode 1, palasthotel, is named after an East Berlin hotel in the German Democratic Republic of foreign travel under StaSi surveillance, from which it borrows a bronze tinted window finish.

episode 2, horizontes soroa, is set in the swimming pool of a remote Cuban resort, under refurbishment in the early 2000s.

episode 3, sindanao, takes its title from the fictional South China Sea island in a 1986 Ulli Lommel horror movie, and is set in 2017 just before the opening of the M+ super-museum in Hongkong’s West Kowloon Cultural District.

Each of the episodes plays out between the exhibition as readymade set-up and the mirage of projected elsewheres. They are punctuated with cameos by international protagonists who appear against the backdrop of the exhibition as sprawling set, including Tobias Berger (M+, Hong Kong), Lisa Le Feuvre (Henry Moore Institute, Leeds), Ulli Lommel (Los Angeles/ Berlin), and Wang Nanming (Shanghai).