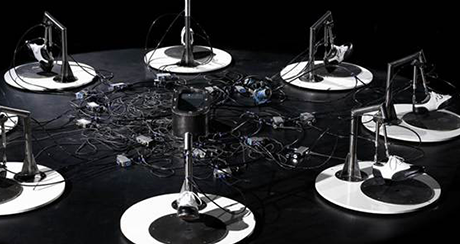 Beijing, France, Canada, Australia, USA, Spain, Poland, Turkey and now Dundee – NEoN is immensely proud to host Peter William Holden‘s first ever exhibition in the UK which opens tonight at the Hannah Maclure Centre at 6pm. Holden’s dancing machines tap, twist and turn in beautifully choreographed rhythmic routines, dissolving the boundaries between cinematography and sculpture and injecting everyday objects with life and personality. His work is a complex collage of his many passions; from dance and electro music to film and mathematics. He seamlessly fuses these elements into his kinetic sculptures which have now become internationally renowned and are establishing him as a very important artist to watch. As well as his own work Holden has collaborated with a wide range of other artists and designers, including Adam Wright – the animatronics and special effects designer for Tim Burton’s Frankenweenie, Wes Anderson’s Fantastic Mr Fox and the Harry Potter films among many others.

Alongside Finding Kinaesthesia there will also be a second opportunity to experience 0800-GRL-DRMZ which was a huge success at the start of NEoN just a few days ago.

Finally, on to Saturday’s closing party which features a headline set from Art of the Memory Palace, a shadowy duo who create lysergic, throbbing grooves out of dense layers of multi-tracked vocals and the ebb and flow of vintage synthesizers. Formed just over a year ago AOTMP have quietly crafted a debut album of beautifully psychedelic mini-epics which will be released next year. This will be their first ever gig and promises to be a spectacular affair, utilising video, projections and a specially designed stage set – all of which will add up to a tremendously immersive experience and fitting way to bring NE0N 2012 to an end. DJ duties on the night will be fulfilled by Baba Gogo’s cosmic disco workouts and RHL digging through his crates of classic House and Techno. The fun starts at 8pm – Art of the Memory Palace will be onstage at 10pm – come and join the fun and help to see out the most successful NEoN yet!