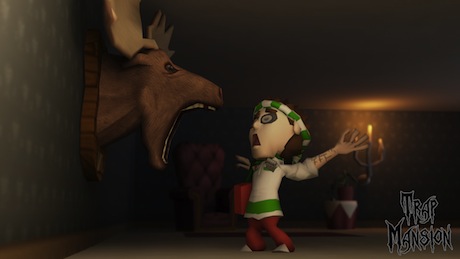 Trap Mansion is the first game from new Dundee based start-up, Too Easy Games and published by Red Radiant Media. Available now on the App Store for the  iPhone, iPod and iPad, we catch up with this spooky team…

Trap Mansion is set in a haunted estate, bursting with booby traps and slightly possessed objects. Taking control of various unsuspecting individuals, you the player are responsible for leading these poor souls to safety!

Too Easy Games was set up by four recent graduates from the University of Abertay. The team consists of three members from the 2011 Dare to be Digital team ‘A Necessary Evil’, creators of the game “Carne Carne”. The team is led by award winning designer Bill Rountree, for designing the Official Game of the Glasgow 2014 Commonwealth Games.

Red Radiant Media Limited was formed in 2011 by former staff members of Realtime Worlds and Irrational Games, They launched their first game Moops, back in July 2012, with another game due this Christmas.

Earlier this year, Red Radiant helped the Too Easy team set up their business and create this first game, they say of the partnership, “Red Radiant Media provided support, office space and guidance to help us get our first game to market as well as to get us established as a business. Words really don’t justify just how much they’ve done for us. They are lovely!”.

It can be really difficult to set up a new creative business, so it’s great to hear about this collaborative partnership.

Now back to the mansion, mwah hah hah.