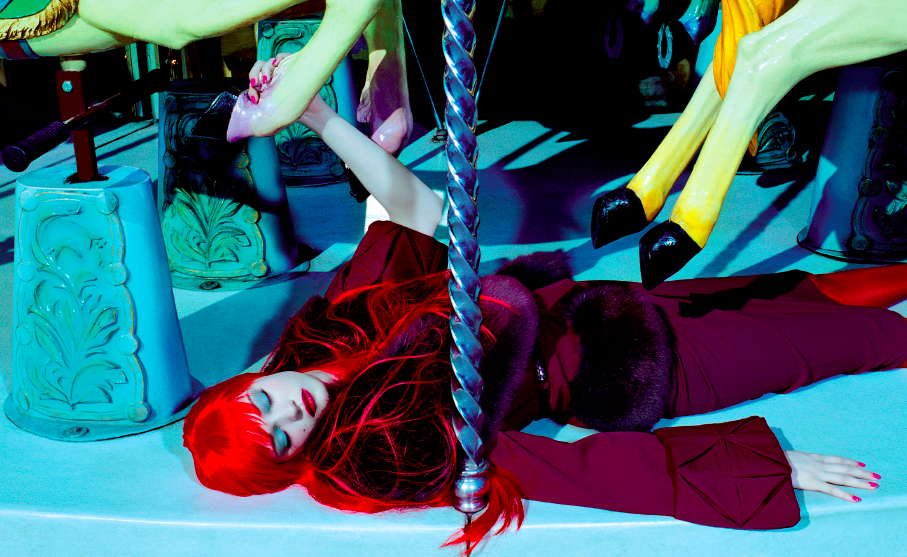 The V&A’s touring exhibition – ‘Selling Dreams: One Hundred Years of Fashion Photography’ – is currently on show at The McManus as part of the pre-opening programme for V&A at Dundee. One of the few selected cities to show the collection, Dundee is also lucky enough to welcome Susanna Brown, Curator of Photographs at the V&A in London, to the city.

Susanna will be giving a lecture on Thursday 6th December at 6pm about this fascinating exhibition. During this free event, Susanna will talk in-depth about the first touring show from the V&A to explore the work of international fashion photographers over the last one hundred years.

Creative Dundee caught up with the lovely Susanna, to find out more about the collection and the curator behind the show:

CD: The ‘Selling Dreams’ exhibition is touring around selected venues within the UK and internationally. Why is the exhibition so special for the V&A?

SB: The show is an important opportunity for the V&A to share some of the wonderful highlights from the Photographs Collection with a wide audience. There are around half a million photographs in the V&A collection, many of which haven’t been exhibited before. ‘Selling Dreams’ is the Museum’s first touring show of fashion photographs. It’s very important for the collection to be seen outside London and ‘Selling Dreams’ has already toured to venues including the RWA in Bristol and RAMM in Exeter. It will be off to Aberdeen, Dubai and Sydney next year.

It is great that ‘Selling Dreams’ is showing to Dundee, as it helps us to build an audience for V&A at Dundee, and demonstrates the quality, diversity and excitement of the exhibitions that will tour to the new museum once it opens.

CD: How did you get into curating?

SB: I did a foundation year at art school, followed by three years at Bristol University studying Art History. At The Courtauld Institute of Art I completed a Masters in ‘History and Theory of the Art Museum’. Throughout University, I was interested in fine art photography and in the history of photographic exhibitions. I worked at London’s National Portrait Gallery for several years before joining the V&A in 2008.

CD: What does your role as curator involve?

SB: The V&A has a team of four curators responsible for the National Collection of the Art of Photography. Our priorities include making new acquisitions, researching and planning displays for the permanent collection galleries, curating touring exhibitions on writing on photography. The V&A runs numerous photography courses and each year we teach a popular evening course about the history of the medium.

The V&A was the first museum in the world to collect photographs, beginning in 1856. The Museum energetically acquired photographs through its library and an innovative programme of contemporary photographic exhibitions was launched in the twentieth century. The Collection is now one of the largest and most important in the world.  It is international in scope and unique in covering the history of photography as a fine and applied art. The Collection has expanded to take a dynamic role in the acquisition of contemporary work.

CD: How on earth did you go about selecting pieces for the Selling Dreams collection?

SB: We wanted to include some of the treasures from the collection and iconic names such as Irving Penn, Cecil Beaton and David Bailey; but we also wanted to present the work of less well-known practitioners such as Peter Rose Pulham. It’s been fantastic to delve into the boxes of photographs in the V&A stores and tell part of the enormous story of the history of fashion image-making. The exhibition focuses on the three main centre of the fashion world: it begins with early images from Paris, after the Second World War we focus more on New York and then shift to London in the 1960s, with the rise of a new generation of designers and young British photographers.

CD: What is your favourite piece from the exhibition?

SB: That is a very difficult choice indeed! I love Baron de Meyer’s work – he was the first contract photographer at Vogue in the early 1900s and the story of ‘Selling Dreams’ really begins with him.

He led an extremely glamorous life for a time, but he was a mysterious character in many ways. His images are beautifully romantic and glittering, always carefully lit and shot in soft focus.

CD: Finally, can you tell us a bit more about Miles Aldridge, who’s stunning work is featured in the exhibition (image above). His work seems to have an almost Wizard of Oz like quality to it?

SB: Yes, Miles is really unique as he’s one of the few fashion photographers shooting predominantly on film. He has an incredible imagination and draws on diverse sources of inspiration for his work, informed by his background in illustration and directing pop videos. His photographs are characterised by vibrant acid tones and his style often echoes the work of 1930s photographers such as Madame Yevonde, who specialised in the Vivex colour process. They are mesmerising, psychedelic pictures!

Having had the chance to pick Susanna’s brains a bit, we are really looking forward to hearing much more from her – roll on the 6th December!

You can book free tickets for the lecture by following the link below:

A Century of Image Making: A Selling Dreams Lecture

Free tickets available from: events@dundee.ac.ukand www.dundee.ac.uk/tickets, in person from Tower Building Reception at the University, or by calling 01382 385564 / 385108.

Selling Dreams: One Hundred Years of Fashion Photography – is on at The McManus: Dundee’s Art Gallery and Museum until 6th January 2013: www.sellingdreamsdundee.co.uk 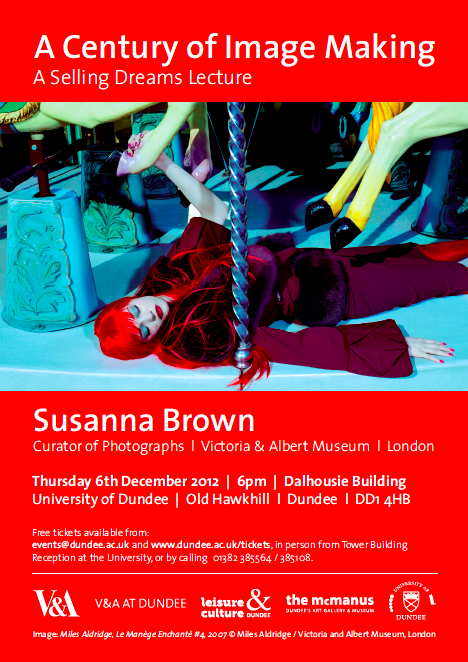