Estrangement at the Cooper Gallery 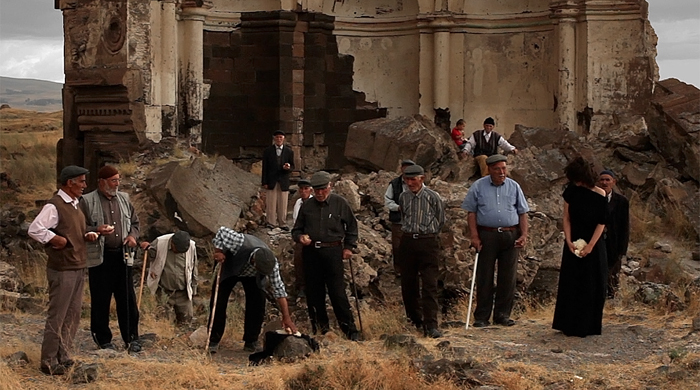 Estrangement reveals a haunting cinematic space that brings together works by four international artists within which apparitions of places and figures are imagined and followed. This show runs at the Cooper Gallery from 18 January – 16 February 2013.

An almost beguiling word estrangement promises images of escape, of being fundamentally displaced from the world. To seize this moment divorced from the real, the works featured in the exhibition populate the uncanny space of the moving image with a range of characters and situations. From a remote controlled camera roving about a landscape, to a group of men standing uncertainly amongst ruins, the viewer is invited to “be carried along solely by the looks of the world”. * In each of the evocative video pieces different and intuitive aspects of estrangement are captured and the quiet wonder of being apart is revealed. In turns unsettling and ambiguous, the works by Fatma Bucak, Larisa Daiga, Evariste Maïga and Samuel Williams call upon the familiar and unfamiliar, the real and the illusory and bring to the Cooper Gallery rich visions of fragmentary landscapes and dissonant solitudes.

Each of the artists invited to exhibit in Estrangement have an emerging but exciting profile on the international scene. Fatma Bucak has shown her works across Europe and in 2012 she won The Worshipful Company of Painter-Stainers Prize with her video performance Blessed are you who come,which will be seen in Estrangement at the Cooper Gallery. Larisa Daiga’s cross-disciplinary maneuver between ceramic and filmmaking led to an Eduardo Paolozzi travel grant for her to research in Japan in 2011 and to her current residency at BrickHouse Ceramic Art Center in New York City. Selected for the Bloomberg New Contemporaries 2011 Samuel Williams works primarily with sculpture and video and has been critically acclaimed for his series of Twenty Second Sculptures. Evariste Maïga’s work draws attention to the question of how do we manage to create when confronted by the unknown. This is illustrated in his two films included in Estrangement, which have also been selected for the Bloomberg New Contemporaries 2012.

To find out more about each of the artists, visit: www.dundee.ac.uk/djcad/exhibitions/exhibitions/estrangement