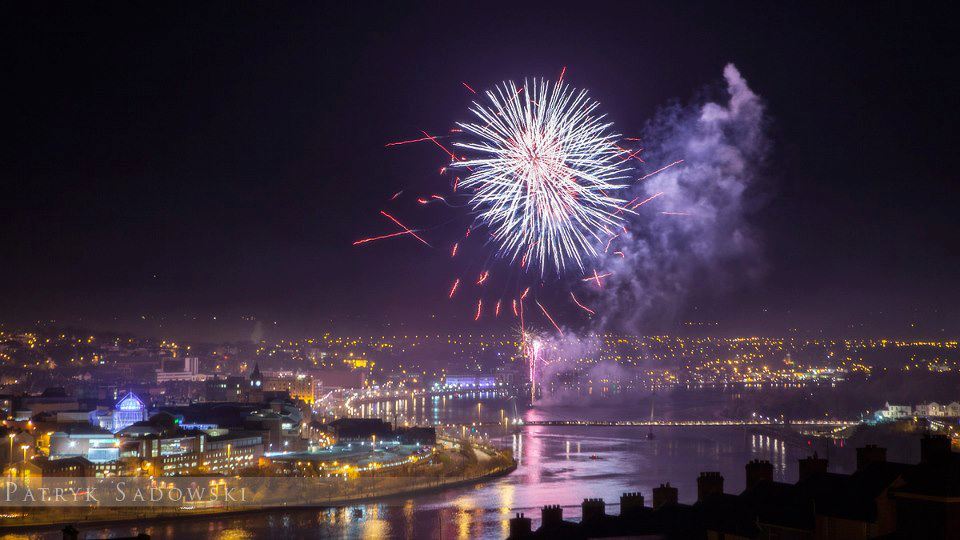 I am very grateful to be asked to bring the next Field Study Visit to you. No.2 is off to Derry~Londonderry in Northern Ireland.

I am originally from a little town near Derry (I am going to refer to Derry~Londonderry as Derry for shortness) but have lived in Dundee for the last 6 years. I was attracted to come to Dundee for University as I found it very similar to Derry and so knew it would make crossing the pond to Scotland a little easier.

Throughout the past 6 years I have watched both cities change and develop but during my return to Derry this Christmas I noticed a massive and very exciting progression throughout the city. In 2010 Derry won the bid to be the first UK City of Culture for 2013. The bid was proposed with a video made and involving local people from throughout the city, like Dundee, Derry has a great creative and digital community.

During these past 3 years the city has undergone great revitalisation. One of the big initial changes was a new pedestrian bridge being built to connect the two divided sides of the city. The Peace Bridge opened in June 2011 with over 1million people having crossed it by September 2012. The bridge is the iconic symbol of the UK City of Culture logo for Derry 2013. 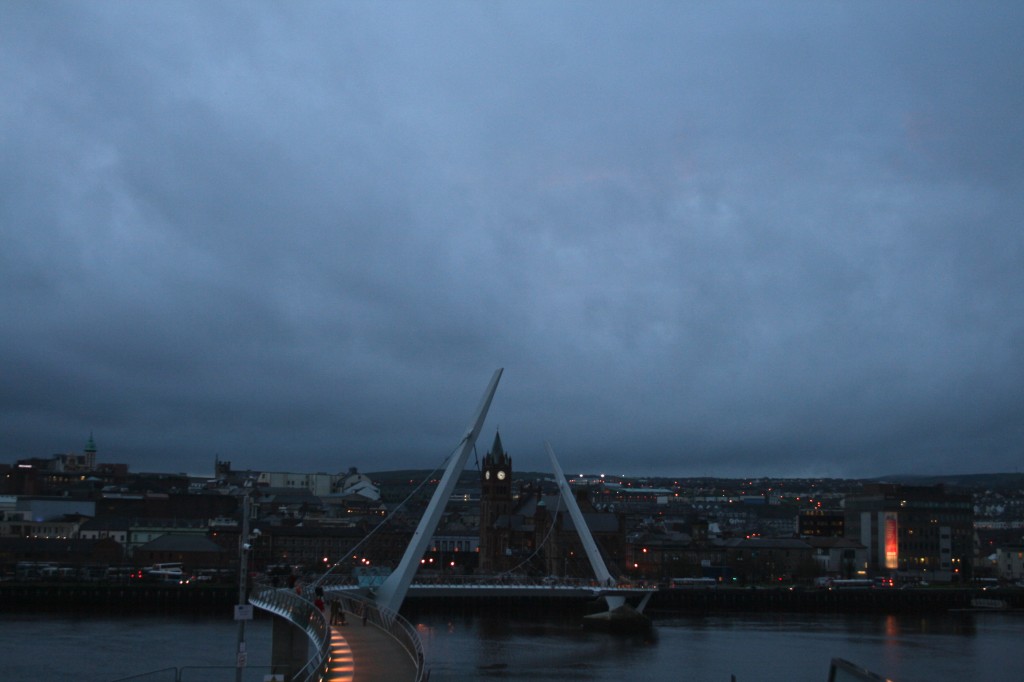 Peace Bridge with Guild Hall in the background. 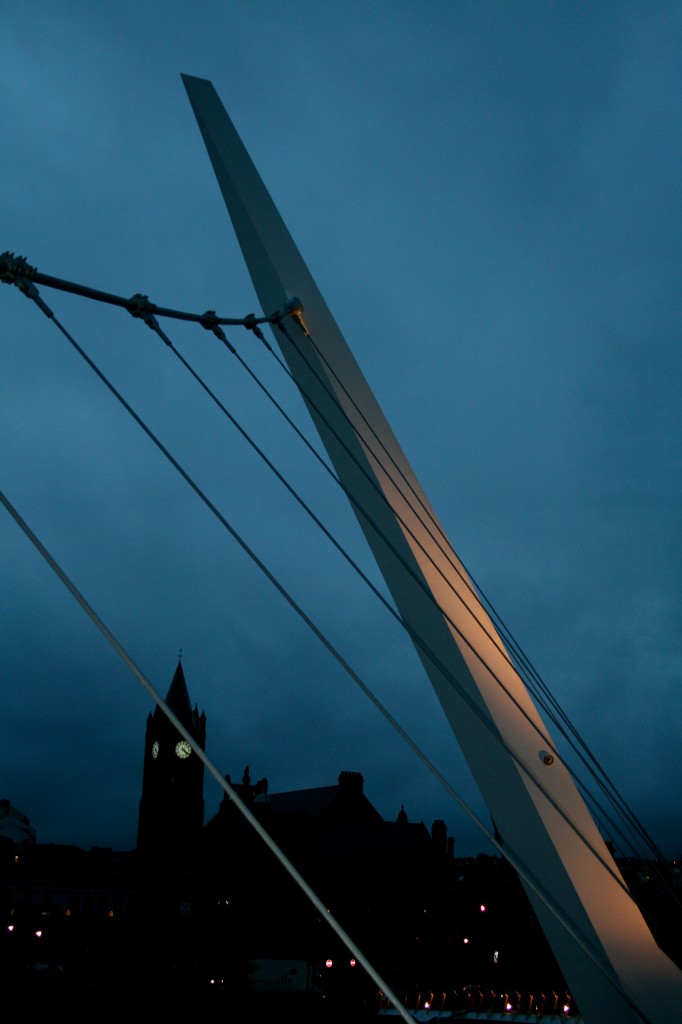 One of the iconic spires of Peace Bridge reaching up with Guild Hall in background.

The Peace Bridge is just one of the changes noticed in the city. The bridge connects to Ebrington Square, which is an area that has been completely changed. This used to be a redundant army barracks with my memory of it being a brick walled, barbed wire enclosed, pretty scary looking place. This has been completely opened and made into a really fabulous public space. The City of Culture offices are now located here along with The Venue, the main pavilion for City of Culture events and an open courtyard space for concerts and events. The Cow Parade was here during summer 2012 too with cows decorated by local schools being involved too. This area shows how what being a City of Culture can do to really make change in a city. 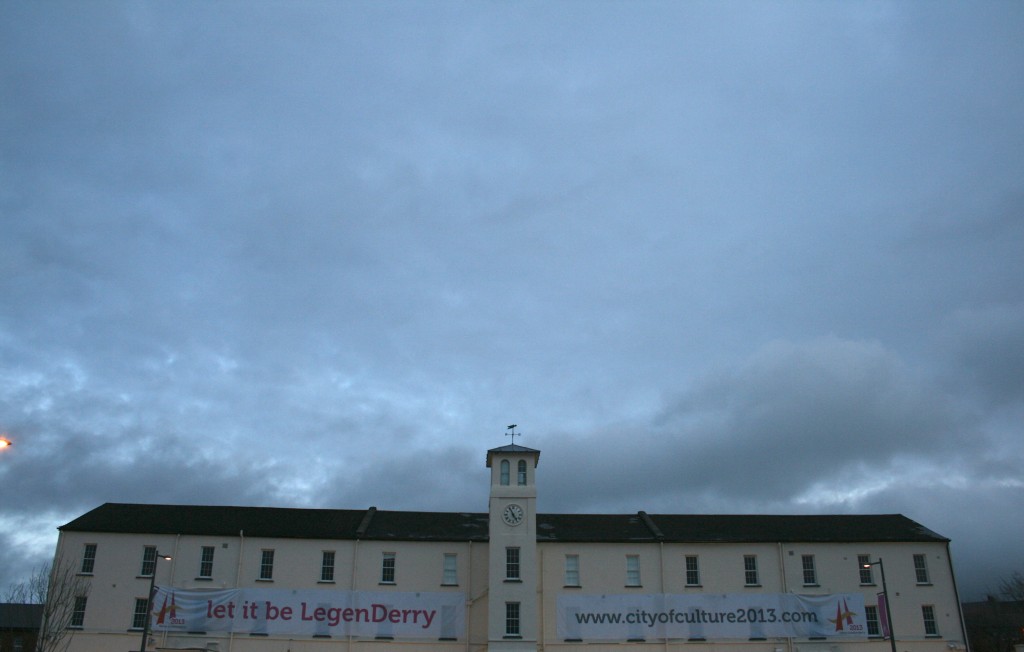 Panoramic view of the public space at the square.

Derry~Londonderry UK City of Culture 2013 was opened on new years eve with an outstanding fireworks display. My family joined with thousands of others to line along the riverside to see the display which was let off from the Peace Bridge. The buzz of excitement at this event was something that I have never experienced before. Derry is known worldwide for its yearly Hallowe’en fireworks display but these were on another level! The riverside and dock area have been completely redeveloped and is now lined with restaurants and coffee shops. This is a beautiful walk during day or night now but previously wouldn’t have felt very safe. It is also a very popular spot for joggers. 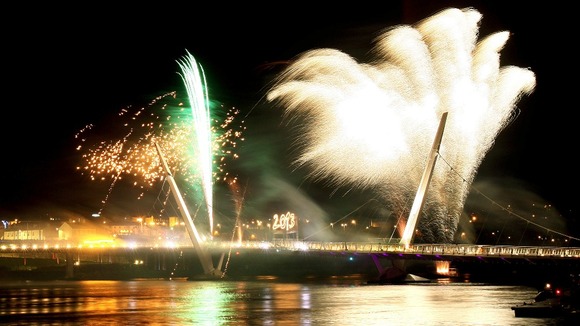 Having been to Derry countless times I hang my head in shame a little as until this year I had never walked around the famous City Walls. These are the only remaining full city walls in Ireland and enclose the inner city with their 1.5km span. The walls are up to 9meters wide at parts and provide a great way to see the city from above. I have no idea how I have lived so close to Derry for 18 years and had never walked the walls but it was a fabulous walk and one I would highly recommend to anyone visiting the city. They reveal and highlight the historical culture of the city from a birds eye view. You can get a guided tour of the walls starting outside the local shopping centre but there are lots of information boards along the way to fill you in on the history of the walls. 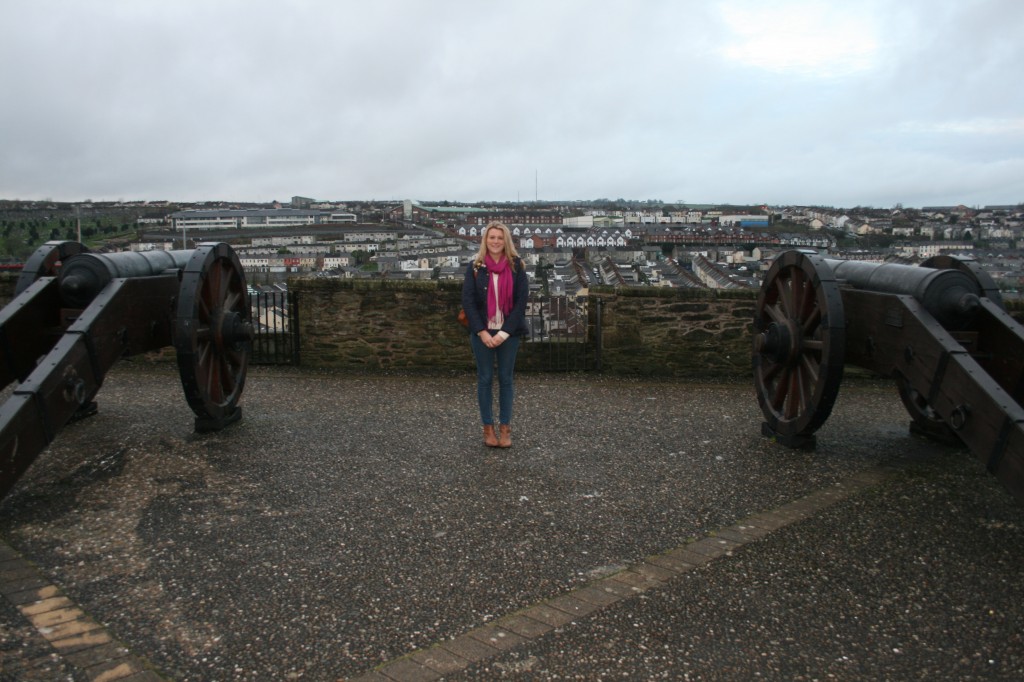 Myself being a tourist on the City Walls. 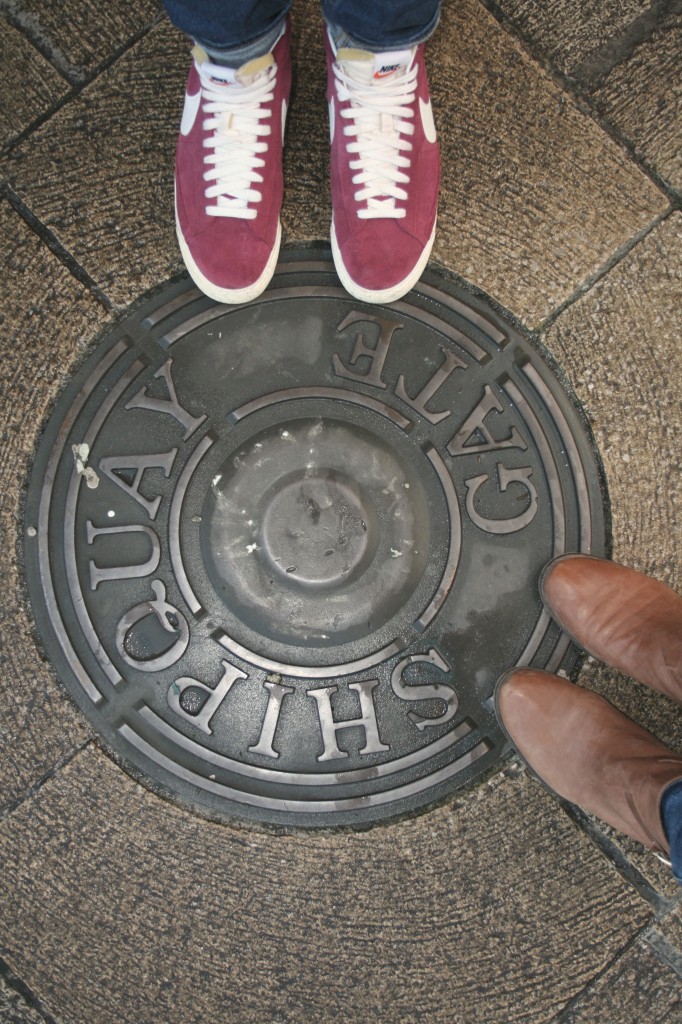 Marking the gate points along the journey of the city walls.

Another area of the city that has been rejuvenated is the Guild Hall Square. This is located at the City side end of the Peace Bridge and was the location of the first continental market to come to Derry. This had such a great cultural and cosy atmosphere over Christmas and the beer tent made the perfect stop off point for a little hot port after a shopping trip.  A great little coffee shop called Legenderry Warehouse No.1 has also opened up here because of the City of Culture, which is also the hub for the City of Culture merchandise. There is an online vision wall for the year where the public and local community can share their hopes and dreams for the city. These were on display in the Guild Hall area on New Years eve and day and gave a really good insight into how excited and proud the people of Derry were to be the first UK City of Culture in 2013. 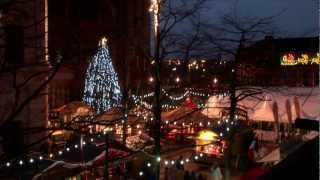 Evening at the Continental Market in Guild Hall square.

The UK City of Culture has really highlighted the existing culture in Derry but has also brought a new vibe and excitement to the City.  The event list for the year ahead is jam packed with something for everyone from all backgrounds and age groups. If you get a change to hop on a flight (there is one from Glasgow Prestwick straight into Derry) I would really recommend getting a chance to explore and experience what being part of a City of Culture feels like.

Find out more about Karen’s adventures by checking out her website: www.karenlyttle.co.uk