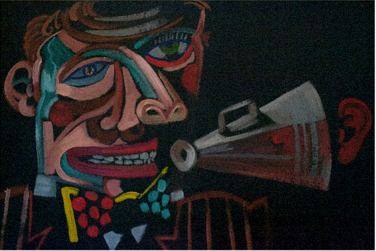 This Friday will see the opening of a major exhibition dedicated to Dundee artist Vincent Rattray (1954 – 2000), a prolific painter who created  a vast amount of work during his lifetime but which is only now coming to light, thanks to the efforts of his family.

Much like his lifelong friend Michael Marra, Rattray romanticised and celebrated the world around him, rearranging tableaus of Dundonian life, saturating scenes with colour and manipulating perspective to tell the story of his beloved city. The ambiguous scenes and theatrical settings for his subjects are rich with symbolism and clues to a secret narrative, and his work belies a great understanding of human nature – skillfully revealing his character’s personalities in a variety of scenarios, some comical, some darker and more sinister.

Rattray graduated from Duncan of Jordanstone College of Art & Design in 1987 with a First Class Honours degree and went on to receive the Royal Scottish Academy’s Maclaine Watters prize. His skill as an artist manifested itself in his uncanny ability to work in any style, never restricting himself to one movement or painting method but rather moving freely between styles from Cubism to Surrealism to Expressionism, showing that there is strength in diversity.

Clare Brennan, Curator of Abertay University’s Hannah Maclure Centre, said: “It’s a great honour to put many of these paintings on show for the first time at Abertay University. Everyone, including Vince’s family, has been astounded by the huge number of paintings he created. During preparations for the exhibition one painting was even discovered inside another – being used as the backing board for the frame!”

‘Synchronise our Eyebrows’ opens this Friday 1st February with a preview evening from 6pm – 9pm at the Hannah Maclure Centre (top floor of Abertay Students Association) and the exhibition runs until April 26th.