What’s it all about? Take a look at our collection of videos from all previous PKNs, here, to get a taste of what Pecha Kucha’s are all about… or look at the global Pecha Kucha website to get the official low-down… but actually the real beauty of a Pecha Kucha is that you really don’t know who you are going to hear from or what they will speak about!

Thanks to illustrator, Jen Collins for the excellent PKN artwork above!

Esperi is a project by Chris James Marr who sometimes collaborates with friends. He is a multi-instrumentalist that hails from Scotland and his songs and indeed sounds are both thought provoking and incredibly uplifting. His sounds range from acoustic storytelling to colourful electronica looped songs. He uses a host of instruments from the conventional to the unusual including his signature rainbow coloured bells which he plays with his feet! @EsperiMusic PKN presentations are filmed and produced with thanks to Bonnie Brae Productions bonniebrae.co.uk 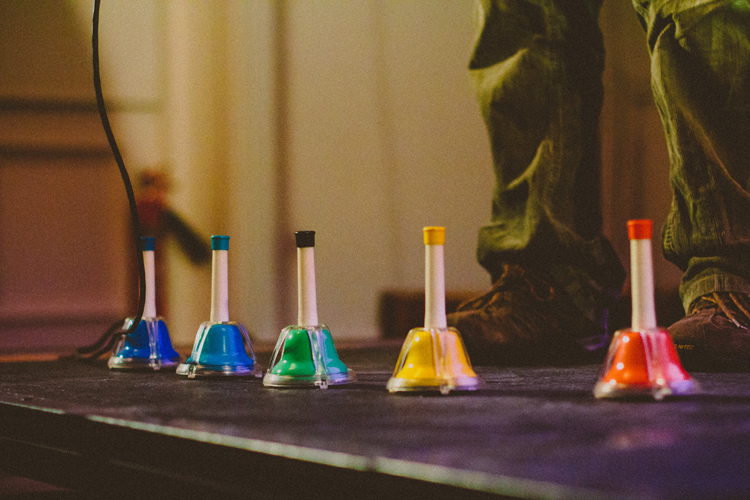 Karen Lyttle is currently doing her Masters in Design for Services in DJCAD. Previous to this she studied Interior and Environmental Design where she developed her HobbyHouse project. Karen is continuing this idea of ‘connecting communities creatively’ through her masters in community engagement projects with the V&A at Dundee and Dundee’s bid for City of Culture in 2017. @karenlyttle. Video from Pecha Kucha Night Dundee Vol 5.

Raz Ullah was born in a decaying Northern Mill town in the 1970s and now his practice resides at the intersection of Music, Sonic Art and Sound Design. He studied Audio Production at City College Manchester under the tutelage of artists from the internationally-renowned Factory Records label, and has released several LP’s and EP’s alongside touring extensively in the UK and the US. His work makes use of cassette players and transistor radios, using them not only as sound generating devices but also as sculptural objects, drawing attention to the ephemeral nature of digital technologies. The sound textures used are informed by the principles of musique concrete and can incorporate found sound, field recordings and magnetic tape manipulations. @artoftheMP. Video from Pecha Kucha Night Dundee Vol 5.

Dylan Drummond is a Dundee based filmmaker providing both content for broadcast, currently for the BBC, and also innovative video production services.  His work has shown at film festivals across the world from Milan to Toronto.  Dylan also set up and administrates  JAM Collective the Dundee based filmmakers’ network which develops new talent and encourages filmmaking at the grass roots level in the city.  Dylan trades as Son of the Sea and is based at Dundee’s Fleet Collective. @sonofthesea8. Video from Pecha Kucha Night Dundee Vol 5.

Mhairi Wild is the Founder and Designer behind the Luxury Textile Accessories brand, madeWILD. Since Graduating in 2003, Mhairi has lectured in both Dundee College and Duncan of Jordanstone’s IED Departments, specialising in Performative Design. She has also presented CPD workshops to Secondary School Art Teachers across Scotland, and worked as a Freelance Theatre Set Designer and Scenic Artist. She is currently working on diversifying her collection, new Mixed Media pieces, collaborations and private commissions. When she is not in her studio, she can be found at home, baking while playing the ukulele. @mhairiwild. Video from Pecha Kucha Night Dundee Vol 5.

Irving Miskell-Reid is a classically-trained hairdresser, following the career he always wanted, in the city he loves. Since 2000, Irving has owned Freedom Hair Experience. Irving is passionate about his home town and has always been positive about its potential and its people. He finds it an inspiration, both for his work and for the things he is interested and passionate about – art and design. Irving and his team regularly raise money for Maggie’s Centre in Dundee, which supports people affected by cancer, through an annual fashion event held in the city, Face of Freedom @dundeehair. Video from Pecha Kucha Night Dundee Vol 5.

Jonathan Baldwin is a former graphic designer and author of the award-winning book “Visual Communication: From Theory to Practice”. For the last 6½ years he has been teaching design at the University of Dundee, but a few days after the Pecha Kucha night he is heading on to pastures new when he takes up a post at the University of Cambridge. @jbaldwin. Video from Pecha Kucha Night Dundee Vol 5.

Esperi is a project by Chris James Marr who sometimes collaborates with friends. He is a multi-instrumentalist that hails from Scotland and his songs and indeed sounds are both thought provoking and incredibly uplifting. His sounds range from acoustic storytelling to colourful electronica looped songs. He uses a host of instruments from the conventional to the unusual including his signature rainbow coloured bells which he plays with his feet! @EsperiMusic. Video from Pecha Kucha Night Dundee Vol 5.

Bryan Beattie is the Director of Creative Services Scotland, one of the country’s leading and longest established cultural consultancies, and its production and publishing subsidiary company, Big Sky, whose recent work includes a 26 part radio series on BBC Scotland, the environment-cultural ‘live documentary’ Infinite Scotland, and the traditional music-Scots language primer The Boy and the Bunnet. He was Expert Adviser to two Ministers of Culture and Strategic Adviser to the Royal Conservatoire of Scotland. Originally from Dundee he is now based in the Highlands. Video from Pecha Kucha Night Dundee Vol 5.

What the devil is a Pecha Kucha Night anyway? Pecha Kucha Nights* were originally started back in 2003 in Tokyo, as an event for creatives to meet, network, and talk about their work in public. Since then Pecha Kucha, meaning ‘chit chat’ in Japanese, has spread internationally running in over 600 cities across the world. The much loved and respected format is relaxed, simple and enjoyable, with something for everyone – presenters have 6 minutes 40 seconds to show and talk through their 20 images, each for just 20 seconds – this keeps things fast and fun! * Pecha Kucha was devised and shared by Klein Dytham architecture. The PKN Dundee event is organised and hosted by Creative Dundee.