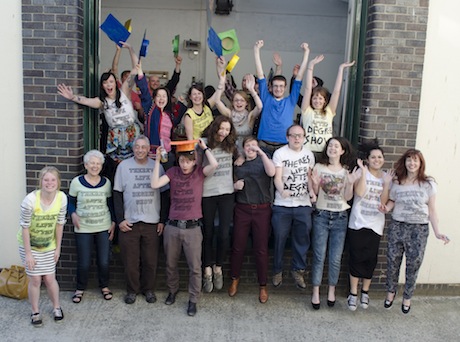 Results just released show that life does indeed continue on for those obtaining a degree in Fine Art. The study, based primarily at Duncan of Jordanstone College of Art & Design, but extending across Scotland, was just released today.

The PI, one Morgan Cahn, embedded herself in the research. She graduated and is now headed to Deveron Arts in Huntly to learn about the elusive ‘Shadow Curator’.

A large contingent of those studied will continue taking notes in this first tumultuous year after Degree Show. They have been organized into 3 sub-groups and will share their findings next year. More information on ‘The Stars Were Aligned’ will be available next year once the data has been tabulated.

Some skeptics aren’t convinced. One outspoken recent graduate, Jane Flynn, could not be reached as she has fled the country.

A few links relating to the recent findings are below:

Special thanks goes to Morgan Cahn, for providing us with these latest findings.