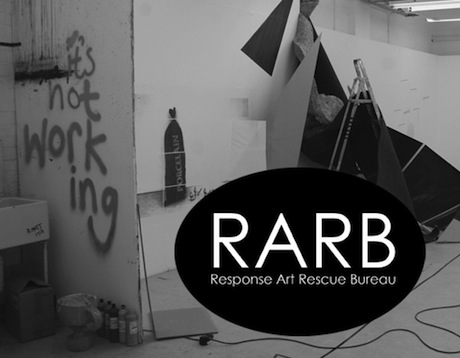 The Response Art Rescue Bureau (RARB) invites you to take part in the One Nation Arts Emergency Planning Tour and help draw up a six-point survival strategy for the creative community of Dundee. Is it Working? 29th – 3rd August.

Dundee is under close scrutiny, it’s being culturally evaluated. The arts community, part of this culture, is facing change like never before and is being urged to draw up an urgent “survival strategy” *. So is it ready to be measured? To what end and to whose values?

This tour is an attempt to understand the community we want to save, help make visible the sets of relations required to thrive. Together we can define the building blocks required to bring about a longterm strategy to create a thriving future for creatives in Dundee?

Discussions will be happening throughout the week and you can drop in anytime to help construct Dundee’s six point survival plan. Free survival kits will be available (limited numbers!). Join in a week of collective thinking, collective making and collective action.

Donna Holford-Lovell, curator behind the event, says: “On the 3rd July 2013  Harriet Harman MP demanded Culture Secretary Maria Miller forge a ‘survival strategy’ for arts and culture outside London, making this challenge at the launch of Labour’s ‘One Nation Arts Tour’ in Bristol with Shadow Culture Minister Dan Jarvis MP. Labour is developing a six point plan for the arts and creative industries which recognises the difficult decisions that need to be made in tough economic times. One of the key points is a strategy for the arts outside London. In response to this we are asking the creative community of Dundee to help inform its own plan and to discuss on what basis will it be drawn upon.”