There will be new rules next week 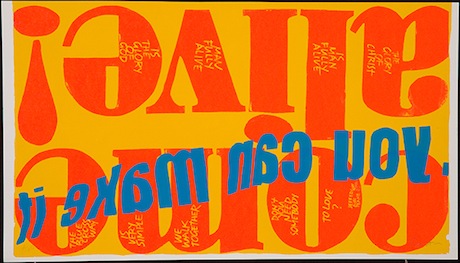 DCA’s next exhibition ‘There will be new rules next week’ features work of Sister Corita Kent alongside five contemporary artists, each inspired by her printmaking and life-affirming teaching: Peter Davies, Ruth Ewan, Emily Floyd, Scott Myles and Ciara Phillips. This show runs from 20th July to 23rd September 2013.

Corita wasn’t your average Sister, during her life (1916 – 1986) she was an artist, illustrator and educator in Los Angeles and Boston. She was also one of the most innovative and unusual pop artists of the 1960s. Her prints combine slogans and poetry and are now recognised as some of the most striking American art of her time.

Peter Davies will exhibit two large-scale paintings referencing Corita’s approach to language and poster advertising. Ruth Ewan and Scott Myles both re-exhibit work from their recent solo shows at DCA, allowing the pieces to take on new associations in the context of this exhibition. Emily Floyd is an Australian artist undertaking a month-long residency at DCA through the Scottish Print Network Commonwealth Project, while Ciara Philips has produced new work in DCA Print Studio.

You can join the exhibition curators Graham Domke and Annis Fitzhugh alongside a selection of the exhibiting artists for Meet the Artists at 18:30 before the exhibition officially opens. Please note that this event is free but tickets are limited; book your space in advance on 01382 909900.

Also showing in the Print Space, will be a show of new DCA Editions by Ilana Halperin. Geologic Intimacy comprises large-scale, text-based woodcut prints alongside other sculptural works, from the series that explores the artist’s longstanding fascination with geological phenomena.

A series of talks, screenings and events coincide with the exhibition, including a British Sign Language Exhibition Tour on Tue 13 August, led by registered sign language interpreter Jennifer Ramsay. Come along to the Poster Club (Wed 28 – Sat 31 August) and see printmakers produce collaborative, open ended posters, and get involved in creating art inspired by Sister Corita Kent and the other artists at the Come Alive workshops (Sat 27 July & Sat 24 August).

There Will Be New Rules Next Week runs from 20th July until 22 September 2013 and is part of Print Festival Scotland, a nationwide exploration and celebration of print which runs from Fri 23 August – Sun 1 September. Find out more about related events on the DCA’s website. 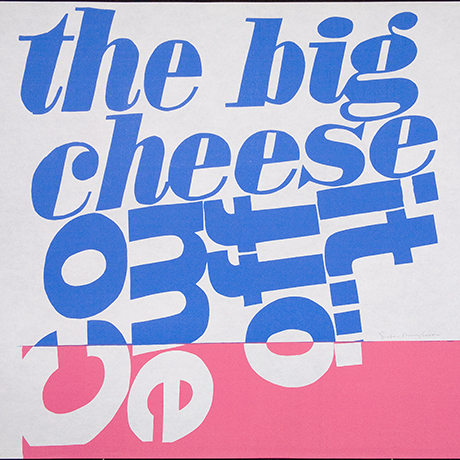