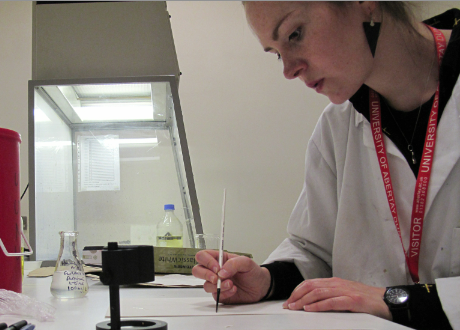 Last March, Creative Dundee reported on a ground-breaking artist residency being offered by the Hannah Maclure Centre, Yuck ‘n Yum and the University of Abertay’s Forensic Science department. The residency involved exploring new forensic techniques which would then be used to inform the creation of print works at the DCA print studio. London – based artist Beatrice Haines was chosen out of hundreds of applications worldwide and she has spent a whirlwind summer travelling between her studio in the south of England, Abertay’s forensic labs and the DCA print studio to produce the works which make up her exhibition, Proof.

Proof is part of the inaugural Print Festival Scotland and is a fascinating showcase for inter-disciplinary practice, demonstrating the ways in which scientific research can provide inspiration for artists beyond their normal avenues of enquiry. The exhibition includes sculpture, etchings, video and digital prints as well as an installation in which the viewer gets the chance to play detective, entering a darkened room with a torch and uncovering the “evidence”.

Speaking about her work and what inspires her, Beatrice Haines says:

“My work has always been inspired by forensics and looking at the traces left behind by people, whether in the form of their fingerprints, their clothing or objects they’ve discarded. Perhaps surprisingly, it’s objects and their history that have always interested me the most, because finding out where an object’s been, and who’s held it and valued it, acts as a kind of portrait of the person who once owned it. So in my art, that’s what I try to get across – that these discarded things have interesting stories to tell.

“Part of the exhibition is a series of comparison prints made from objects I found while I was exploring Dundee. In the forensics lab, they have a comparison microscope for comparing different kinds of fibres where you can see a double-image as you look through the viewfinder. So one of the things I’ve done is take an old football I found in Dundee, and one I found in London – where I come from – cut the seams and laid them out flat. Then, using a forensic solution that picks up traces of mud, I’ve put them through a printing press, which has revealed all the scuff marks and tells the story of what happened to these footballs before they were abandoned. It was a bit of an experiment really, because I wanted to reflect the experimental nature of the work that the researchers in the forensics lab here at Abertay carry out, but I’m really pleased with the way it’s turned out.”

“I love science, and I really hope that the way I’ve presented the things I’ve learnt about during this residency will capture people’s imaginations. My hope is that the way things change as they’re being viewed will make people leave feeling like they’ve witnessed a scientific experiment, and that they’ll feel inspired about science, and hungry to know more.” 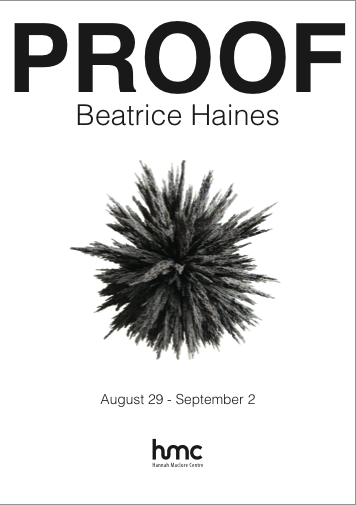 Proof is open to the public from  29th August to 2nd September, and is also part of Crawl Inclusive which takes place on Friday 30th August. This looks to be a specially fun evening with the entire Yuck ‘n Yum team present, including their resident DJ Ben ‘Jack Your Body’ Robinson who will be providing another awesome selection of tracks for your listening pleasure while you peruse the exhibition. Full details can be found here.