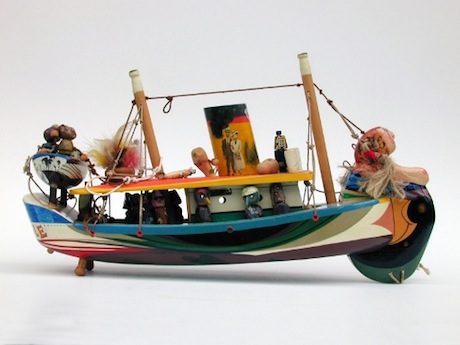 Sam Smith (1908-1983) was an artist best known for his hand-carved painted wooden toys and sculpture. His work often depicts themes of the sea, particularly boats and harbours, and so it makes perfect sense that an exhibition of his life’s work should be on show at the Scottish Fisheries Museum, Anstruther.

Sam’s work began as simplistic elements that could be easily reproduced for sale and gradually developed into more singular and complex works of sculpture, all signed “Sam Smith. Genuine, England!”

Many works are toys for grown-ups with ‘adult’ depths of meaning. His figures can be seen as satirical, revealing deeper instincts beneath social conventions, all with a keen sense of the comical and an eye for the absurd.

Sam was true eccentric, a special kind of visionary genius that the British Isles is well endowed with but which we are usually too modest or embarrassed to talk about. An admirer of the graphic tradition of Paul Nash, Edward Bawden and Eric Ravillious, Sam’s influence can in turn be seen in the work of British Pop artists such as Peter Blake and the surrealism of psychedelia.

Anyone who joined us at Pecha Kucha Night Vol 6 had the pleasure in hearing from Andrew Demetrius, curator of this exhibition who spoke about Sam’s curiously cool work; if you didn’t catch that, then you can watch Andrew’s talk below: