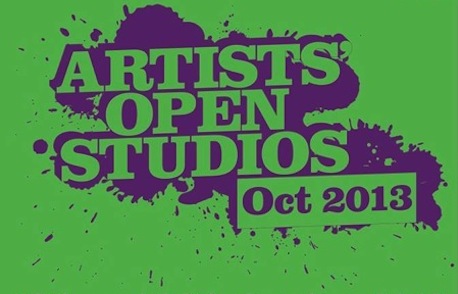 Alongside the usual great chance to see inside lots of artist’s studios, they are hosting a number of extra events and also have a new cafe and a shop too… Here are more details about what and when:

Dawn Wood grew up in Omagh, Co. Tyrone, and now lives in Perthshire, working as a science lecturer at The University of Abertay, Dundee. Her poetry publications include Ingathering (forthcoming, Nov 2013) and Quarry (2008) with Templar Poetry, and Hermes with Gift (UAD Press, 2011).

Richard Watt is a journalist, reviewer, musician, and poet. Born in Tayside, he studied English and Philosophy at university, and was tutored by poet Colette Bryce. He won the Dundee Poetry Prize in 2004. His latest poetry collection, The Golem, was published in 2012. He has translated a sheaf of German submarine poetry for the Black Watch Association. He is currently working on a novel: a pennydreadful titled Grotesques, and a new poetry and prose collection called Take Heart, due for release in 2015.

Pecha Kucha Nights came to the city in 2011 as a way to better connect and show off the impressive talent existing in the city, from all backgrounds and disciplines. The super short presentation style originally invented in Japan, keeps things fast paced, fun and thought-provoking. Creative Dundee who are the hosts of Dundee’s PKNs have curated a selection of choice picks from their video back-catalogue. So stop, take a break, sit back and enjoy this whirlwind tour of this city’s rich creative scene.

Vanilla Ink is an innovative programme that sees the best of Britain’s newest jewellery designers descend on Dundee to be a part of an exciting, award winning studio. October sees a new batch of ‘Inkers’ join the Vanilla Ink Programme for a year. Your chance to ‘Meet the Inkers’ an insight into their work and what they plan to do in the next year within this creative hub.

TRiGGER is one of the ArtWorks Scotland / Paul Hamlyn Foundation research networks exploring and developing practice within participatory settings. TRiGGER is holding a participatory drop in afternoon on Sunday 20th October at WASPS Meadowmills Gallery space from 2-5pm. We will be inviting visitors and studio artists to contribute to an informal reflective visual response to WASPS Open Studios weekend. The afternoon is a relaxed and interactive experience with participation welcome from all visitors.

These events will take place in Project 1 on the 4th floor.

Ms Battenberg’s Travelling Tea Room will provide a veritable cornucopia of delectable treats. Sit back and relax with some homemade treats and a cuppa. Available throughout the weekend.