Thomson & Craighead back where it began 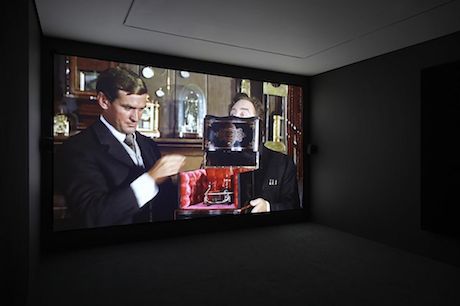 DCA stages the largest solo show in Scotland of the work of Thomson & Craighead from 18 January -16 March 2014. It is an exhibition which represents a triumphant return for the visual artists to a city that has played a formative role in their careers.

This show also represents another major landmark as it commemorates twenty years working together as collaborative artists – back in the city where it all began.

Best known for creating work from the flotsam and jetsam of global Internet culture, the artists work across video, sound, sculpture, installation and online space. They use technology as a means to reformulate fundamental human questions for our fast-moving times.

The exhibition entitled Maps DNA and Spam runs from Saturday 18 January to Sunday 16 March and features new work (the local homage Dundee Wall, Corruption and The First Person) and a selection of the duo’s best-regarded installations The Time Machine in alphabetical order, Belief, Six Years of Mondays and A short film about War.

The artists met and first collaborated as students at Duncan of Jordanstone College in Dundee in the early 1990s. The city of Dundee and Scotland specifically, is clearly something that is both close to their hearts and crucial to their careers. Alison Craighead, is a native Aberdonian, and the pair also have a home in Kingussie, with the artists splitting their time equally between London and Speyside.

In October 2013 Thomson & Craighead’s place within the pantheon of contemporary artists working in the digital age was confirmed when their work was name-checked in Turner Prize Winner Grayson Perry’s BBC Reith Lecture series. He said: “There are artists that work digitally in a very interesting way. Two artists, British artists – Jon Thomson and Alison Craighead – very interesting. They do thought-provoking, lyrical, often hilarious interventions with the kind of flow of information that is pouring around the web.”

Perry believes that not only is the work compelling in and of itself but also that it points the ways for artists of all kinds to exhibit and sell their work outside of the traditional gallery system and its gatekeepers. With the duo’s championing of online editions and e-commerce the Courtauld Institute’s Julian Stallabrass claims ironically that the old art order has good Reasons to Hate Thomson and Craighead.

Jon Thomson, born 1969, and Alison Craighead, born 1971, live and work in Scotland and London. They make artworks and installations for galleries, online, and outdoor projects. Much of their recent work, as showcased here in Dundee, looks at how communications networks like the worldwide web are changing the way we relate to the world around us – the conflict between our private and public identities, the global and the local and the way in which modern communications inform our sense of place and self in the world.

Jon Thomson says: “We’re both extremely honoured to be asked to come back to Dundee, especially as it’s almost exactly twenty years since we started showing work as artists. Dundee and DCA specifically, holds nothing but positive associations for us both: we met here and studied together in the city and we’re delighted to be returning for the first time since participating in the group show Timecode in 2009.”

Some highlights on display include:

Dundee Wall is a site-specific installation that provides a local spin on their previously produced London Wall, where status updates taken from online social media generated within a few miles of DCA are typeset, printed and pasted across a gallery wall in chronological order, offering a poetic snapshot of the area’s social networking traffic. Expect to see a mixture of the banal, profound and sometimes humorous musings of the local digital community.

The Time Machine in alphabetical order – The 1960 film version of HG Wells’ famous novella has been careful re-edited by hand to play in alphabetical order according to every word spoken in the film. In so doing, the artists attempt to impose ‘a kind of time travel’ upon the movie’s original time line through the use of a system of classification.

Six Years of Mondays – This video documentary is of particular local interest as it features time-lapse movies made by the Fife man Graham Smith who has been recording the view from his bedroom window every day from 6am to 6pm since 2006.

The First Person – The First Person is a generative video work that takes an endless stream of first person testimony sourced from American self-help websites and randomly intercuts this quoted material with the found video footage of a burning house. 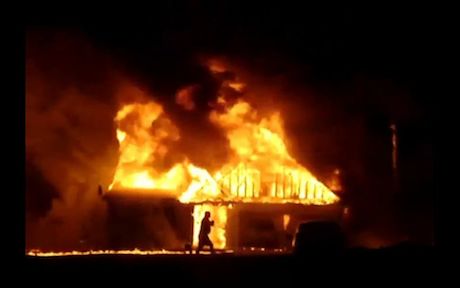