A Flurry of Pecha Kuchas! 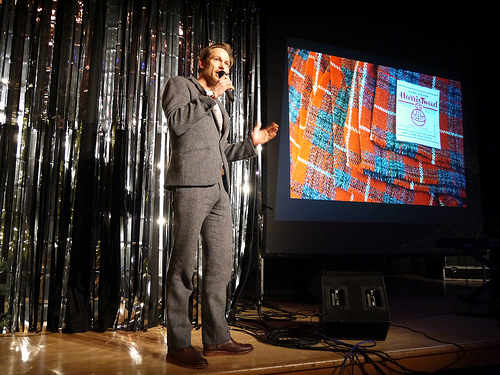 Here are a flurry of Pecha Kucha talks from our festive event, Stop, Collaborate and Celebrate which was run in partnership with Cultural Enterprise Office!

Mark Hogarth
Mark Hogarth, Creative Director of Harris Tweed Hebrides, part of the team that have been credited with transforming the unique heritage industry via high-end fashion collaborations with brands including Topshop, Converse, Schott NYC on the Perfecto Motorcycle Jacket, Nigel Cabourn on the Mallory Jacket and Scottish designers such as Deryck Walker and Judy R Clark, explained, ‘Harris Tweed is just a fabric we need these people. We need to collaborate with higher designers it is our interface to public perception and ultimately branding.’

Fi Scott
Make Works‘ own Fi Scott visited 120 factories in Scotland to better connect the creative industry with making. Describing themselves as a ‘manufacturing dating service’ the team will launch The Make Works Directory in 2014 which draws on their Make Works Tour and documents the collaboration process between designers and manufacturers from the tour’s residency programme.

Ben Spencer
Ben Spencer, VELOCITY Producer – a cultural response to the impact of Glasgow 2014 Commonwealth Games through a public art programme. Itself a partnership, Velocity’s key role is to broker collaborations across new and unexpected partnership in the public sector.

Alice Dansey-Wright
Glasgow-based Illustrator of much goodness, Alice Dansey-Wright whose collaborative projects include with the Jan Matejko Academy of Fine Arts, Glasgow School of Art and most recently as one of 25 collaborators as part of the Create:Eat’ collaborative dining experience reflected, ‘Collaboration has allowed me to share skills, improve my work, be part of something more high profile, reach a new audience and work with someone in another country.’

Photos from the night can be found here.