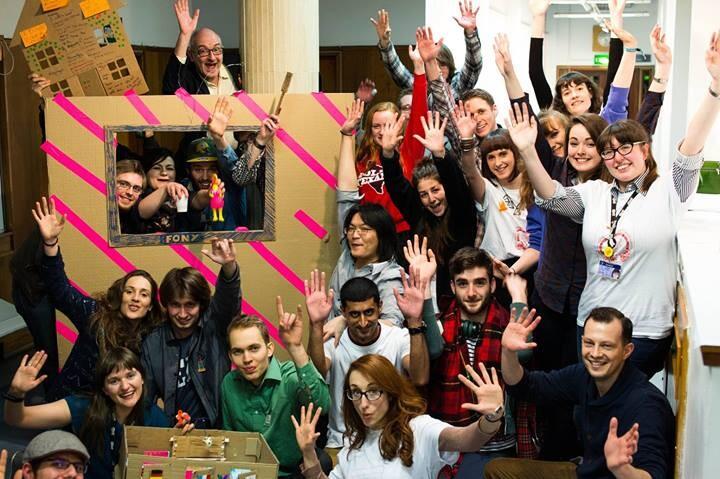 Although Global Service Jam is just 3 years old, the Jams have seen thousands of people come together in cities around the world and with just 48 hours to change the world, hundreds of ideas have burst into life. These projects include solving big global challenges and local civic problems, but all ideas share GSJ’s mantra of ‘doing not talking’.

This weekend was Dundee’s GSJ third jam and Linsey McIntosh, one of the #GSJDundee organisers, summed up the event at the finale as a ‘roller coaster of a design adventure’. And it was. Listening to the teams talk through their final projects in a short presentation, it was clear that actually the whole 48 hour experience is just as important as the finished pitch.

On the Friday evening, all GSJs around the world find out the secret theme – this year’s was simply a picture of a flat-pack box! After people cluster into multi-displinary teams, the Saturday involves going out on to the streets to research their initial themes and ideas with the public – a really valuable experience. The teams then have until the Sunday afternoon to craft their ideas into functioning prototypes to show to the world. Oh, and if that wasn’t enough, the teams regularly Skype other participating GSJs (such as Beirut and Washington) just to see how everyone is getting on. The Jam is big on community and collaboration.

A huge well done to all the organisers, volunteers and participants, who at the end of their 48 hour stint, still seemed full of energy! They said…

“Because we need to sleep!”

You can find out more, here: www.dundeeservicejam.wordpress.com and below a brief run-down of the final projects, including their rapidly made videos:

Play, Learn, Eat
Team: Alicia, Joe Sovcik, Catalin, Gareth
Team P, L+E did their initial research in Subway to find out peoples eating habits. They decided to develop products which would encourage healthy eating by kids, getting in early to hopefully encourage healthy eating for life. Their grow your own veg kits had an added advantage of using game mechanics in a virtual space. By logging on to the virtual world, kids can learn how to grow their food and interact in a farmville-esque community, sharing photos – watching and learning from their real and virtual crops growing. By growing crops, they would be rewarded with discounts for supermarkets, aimed at parents to by recipe ingredients to go with their home-growns.

Team: Ioana, Grant, Lewis, Luke, Victor
This team chose to look into the challenges facing graduates and first time buyers in the housing market. With mortgages out of most people’s reach and an issue of disused buildings in prime locations, they considered how they could address this and bridge the gap. C Square was born – using flat pack cubes to create modular homes, e.g. 3 cubes would be the most basic version with a kitchen, bathroom and a living space. The team saw that these cubes would be placed (with consent!) into abandoned buildings, creating affordable living to suit the lifestyle needs of the individual.  Obviously one weekend isn’t enough time to thrash out this idea properly, but it is interesting given the challenges facing the market and in terms of the Community Asset Transfer scheme in the city!

Stereotypes Pub
Team: Zdenek, Lizzie, Anna, Aishwarya, Petr
We don’t like it, but sometimes we do it. Putting people into boxes or stereotyping people is a big challenge and this team were interested to find out if there was something good about exploring stereotypes and the behaviour associated with it. During their research phase they asked the public to categorise people into four boxes, but without providing them with any category headers. What they found was people chose to categorise people by facial expression, or by their look. From there they focused their project on tackling prejudice of nationalities, by creating a social platform for different nationalities to come together. The idea was that by inviting people from different countries to a party of their country, they would actually attend the same party and learn from each other.

Team: Susannah, Alison, Urška, Leo
‘At some point in our lives we stopped being children and became adults’. This team wanted people to reconnect with their inner child, through a hide and seek style app which allows people to play and de-stress from every day life. Taking part in 30-40 min hide and seek games would allow you to connect with others and have fun by using the in-game temperature checker/phone GPS to find out if you are warm/near another person or not. Like geo-caching, this game could be played anywhere and with anyone in world. This team hadn’t worked together before and used their combined skills in graphics and interior design to come up with their project. The video proves that they had a lot of fun making it happen!
Join AMPS