Vic Galloway – Take back the city 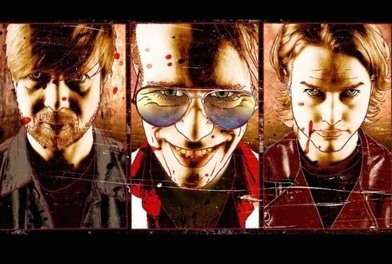 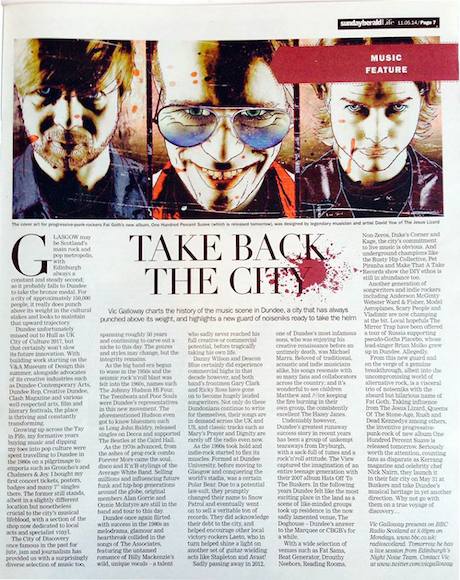 This article by Vic Galloway first appeared in the Sunday Herald on 11th May 2014, it was so good that we felt it deserved being shared. You can read it on their site here. Thanks Vic for such a well considered insightful piece and thanks to the Herald for publishing too.

Take back the city

Vic Galloway charts the history of the music scene in Dundee, a city that has always punched above its weight, and highlights a new guard of noiseniks ready to take the helm

Glasgow may be Scotland’s main rock and pop metropolis, with Edinburgh always a constant and steady second; so it probably falls to Dundee to take the bronze medal.

The cover art for progressive-punk-rockers Fat Goth’s new album, One Hundred Percent Suave (which is released tomorrow), was designed by legendary musician and artist David Yow of The Jesus Lizard
For a city of approximately 150,000 people, it really does punch above its weight in the cultural stakes and looks to maintain that upward trajectory.

Dundee unfortunately missed out to Hull as UK City of Culture 2017, but that certainly won’t slow its future innovation. With building work starting on the V&A Museum of Design this summer, alongside advocates of its creative industries such as Dundee Contemporary Arts, Dundee Rep, Creative Dundee, Clash Magazine and various well-respected arts, film and literary festivals, the place is thriving and constantly transforming.

Growing up across the Tay in Fife, my formative years buying music and dipping my toes into pop culture were spent travelling to Dundee in the 1980s on a pilgrimage to emporia such as Groucho’s and Chalmers & Joy. I bought my first concert tickets, posters, badges and many 7″ singles there. The former still stands, albeit in a slightly different location but nonetheless crucial to the city’s musical lifeblood, with a section of the shop now dedicated to local acts and specialist vinyl.

The City of Discovery once famous in the past for jute, jam and journalism has provided us with a surprisingly diverse selection of music too, spanning roughly 50 years and continuing to carve out a niche to this day. The genres and styles may change, but the integrity remains.

As the big band era began to wane in the 1950s and the seismic rock’n’roll blast was felt into the 1960s, names such The Johnny Hudson Hi Four, The Teenbeats and Poor Souls were Dundee’s representatives in this new movement. The aforementioned Hudson even got to know bluesmen such as Long John Baldry, released singles on Decca and supported The Beatles at the Caird Hall.

As the 1970s advanced, from the ashes of prog-rock combo Forever More came the soul, disco and R’n’B stylings of the Average White Band. Selling millions and influencing future funk and hip-hop generations around the globe, original members Alan Gorrie and Onnie McIntyre are still in the band and tour to this day.

Dundee once again flirted with success in the 1980s as melodrama, glamour and heartbreak collided in the songs of The Associates, featuring the untamed romance of Billy Mackenzie’s wild, unique vocals – a talent who sadly never reached his full creative or commercial potential, before tragically taking his own life.

Danny Wilson and Deacon Blue certainly did experience commercial highs in that decade however, and both band’s frontmen Gary Clark and Ricky Ross have gone on to become hugely lauded songwriters. Not only do these Dundonians continue to write for themselves, their songs are in demand across the UK and US, and classic tracks such as Mary’s Prayer and Dignity are rarely off the radio even now.

As the 1990s took hold and indie-rock started to flex its muscles. Formed at Dundee University, before moving to Glasgow and conquering the world’s stadia, was a certain Polar Bear. Due to a potential law-suit, they promptly changed their name to Snow Patrol and eventually went on to sell a veritable ton of records. They did acknowledge their debt to the city, and helped encourage other local victory-rockers Laeto, who in turn helped shine a light on another set of guitar-wielding acts like Stapleton and Avast!

Sadly passing away in 2012, one of Dundee’s most infamous sons, who was enjoying his creative renaissance before an untimely death, was Michael Marra. Beloved of traditional, acoustic and indie musicians alike, his songs resonate with so many fans and collaborators across the country; and it’s wonderful to see children Matthew and Alice keeping the fire burning in their own group, the consistently excellent The Hazey Janes.

Undeniably however, Dundee’s greatest runaway success story in recent years has been a group of unkempt tearaways from Dryburgh, with a sack-full of tunes and a rock’n’roll attitude. The View captured the imagination of an entire teenage generation with their 2007 album Hats Off To The Buskers. In the following years Dundee felt like the most exciting place in the land as a scene of like-minded groups took up residence in the now sadly lamented venue, The Doghouse – Dundee’s answer to the Marquee or CBGB’s for a while.

With a wide selection of venues such as Fat Sams, Beat Generator, Drouthy Neebors, Reading Rooms, Non-Zeros, Duke’s Corner and Kage, the city’s commitment to live music is obvious. And underground champions like the Rusty Hip Collective, Pet Piranha and Make That A Take Records show the DIY ethos is still in abundance too.

Another generation of songwriters and indie rockers including Anderson McGinty Webster Ward & Fisher, Model Aeroplanes, Scary People and Vladimir are now champing at the bit. Local hopefuls The Mirror Trap have been offered a tour of Russia supporting pseudo-Goths Placebo, whose lead-singer Brian Molko grew up in Dundee. Allegedly.

From this new guard and on the verge of a genuine breakthrough, albeit into the uncompromising world of alternative rock, is a visceral trio of noiseniks with the absurd but hilarious name of Fat Goth. Taking influence from The Jesus Lizard, Queens Of The Stone-Age, Rush and Dead Kennedys among others, the inventive progressive-punk-rock of new album One Hundred Percent Suave is released tomorrow. Seriously worth the attention, counting fans as disparate as Kerrang magazine and celebrity chef Nick Nairn, they launch it in their fair city on May 31 at Buskers and take Dundee’s musical heritage in yet another direction. Why not go with them on a true voyage of discovery…