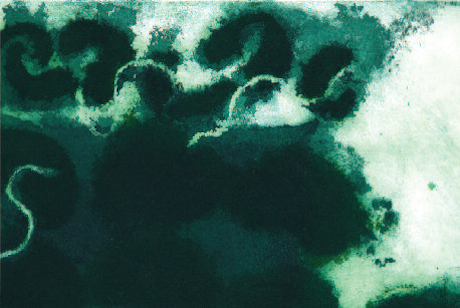 DCA Print Studio are delighted to announce an exhibition of recent etchings made by Dawson Murray as part of the Eye Can Draw research project at DCA Print Studio.

Eye Can Draw has been spearheaded by Robert Jackson, Print Studio Coordinator at DCA, who has developed the use of a home-made eye-tracking device as a drawing tool for print artists with disabilities. The focus of the project is to enable artists to re-engage with direct drawing methodologies in relation to their printmaking practice.

A quadriplegic multiple sclerosis sufferer Dawson Murray, formerly an accomplished watercolourist, has continued to make etchings with the assistance of his wife, assistant and the staff of the Print Studio. To some extent these images have always been a compromise but now the Eye Can Draw technology allows him much more control over the image.

His drawings using the eye-tracking device have then been printed in his own highly developed wet into wet sugar-lift technique which recreates the volatile, often unpredictable reaction between paper, pigment and water that he so enjoyed as a watercolourist.

Murray’s exhibition will coincide with an exhibition of Jackie Smith’s Eye Can Draw prints at the Multiple Sclerosis Centre in Dundee. Find out more at www.taysidemstherapy.co.uk.