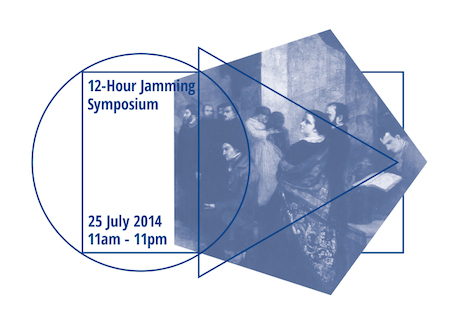 12-Hour Jamming Symposium is a vital platform for discursive interrogations and speculations on the phenomena of collaboration and the ideas, art works and writings constituting Studio Jamming: Artists’ Collaborations in Scotland at Cooper Gallery.

Staged in the Studio Jamming Hub at Cooper Gallery on Friday 25 July, the Jamming Symposium will construct a collaborative public ‘site’ ​to present the propositions, positions, exchanges and Declarations illuminating an expanded notion of collaboration. More importantly, the symposium will open up a wider critical debate that tackles and problematises the various contexts in which collaboration is situated.

Centred on Declarations from Artists’ Collaborative Groups from across Scotland the Jamming Symposium will also feature readings by writers participating in the Studio Jamming Group Critical Writing Residency and keynote talks by international and national leading thinkers whose practices invest collaboration with depth and rigour.

Jammed with gigs, performances, screenings and readings, the 12-Hour Jamming Symposium will provide an auditorium for the multiple voices that are the spirit of contemporary art and culture in Scotland.

12-Hour Jamming Symposium is free and open to everyone. If you would like to attend please RSVP to exhibitions@dundee.ac.uk.

David Harding is an artist and teacher. In 1985 he was appointed head of a new department, Environmental Art, at the Glasgow School of Art, becoming Head of Sculpture and Environmental Art in 1995. He has been credited as one of the initiators of what The Guardian recently described as a ‘golden age’ for the visual arts in Glasgow. Harding has collaborated with artist Ross Birrell and has exhibited nationally and internationally.

Maria Fusco writes fiction, critical and theoretical texts, edits publications, and contributes to a broad range of magazines, books and catalogues. Fusco is a Reader at Edinburgh College of Art, University of Edinburgh and was Director of Art Writing at Goldsmiths College, University of London. Fusco is founder/editorial director of The Happy Hypocrite a semi-annual journal for and about Experimental Art Writing.

Stine Hebert is an art historian and curator based in Copenhagen, Denmark. Hebert has practiced as a freelance curator for a number of years focusing on investigations of conditions of artistic production. Hebert was previously Acting Director of BAC-Baltic Art Center in Visby; curator at Kunsthal Charlottenborg in Copenhagen, and now holds the position as Rector of Funen Art Academy in Odense, Denmark. Hebert co-edited the international anthology ‘Self-Organised’ with Anne Szefer Karlsen in 2013.

Maria Lind is Director of the Tensta Konsthall and an independent curator and writer interested in exploring the formats and methodologies connected with the contemporary art institution. She was the director of the graduate program at the Center for Curatorial Studies, Bard College from 2008–10. Before that, she was director of lASPIS in Stockholm (2005–07) and Director of the Munich Kunstverein (2002–04). Previous to that she was curator at Moderna Museet in Stockholm (from 1997–2001) and in 1998 was co-curator of Manifesta 2, Europe’s nomadic biennial of contemporary art. Lind was the 2009 recipient of the Walter Hopps Award for Curatorial Achievement. A compendium of her essays to date, Selected Maria Lind Writing, was published by Sternberg Press in 2010.

Francis McKee is a writer and curator based in Glasgow and is currently the Director of the Centre for Contemporary Arts, Glasgow.McKee curated the Scottish participation at the Venice Biennale with Kay Pallister in 2003 and was the Director of Glasgow International from 2005-2008. He has worked on the development of open source ideologies and their practical application to art spaces, specifically the Centre for Contemporary Arts in Glasgow. Since 2011 he has been lead researcher on an AHRC research project – The Glasgow Miracle: Materials Towards Alternative Histories; indexing the archives of The Scottish Arts Council Gallery, Glasgow, the Third Eye Centre and CCA, spanning 1973 to the present.

Dr Dominic Paterson is a writer and Lecturer in History of Art at the University of Glasgow. He has written widely on contemporary art, including texts on Christine Borland, Martin Soto Climent, Anne-Marie Copestake, Kate Davis, Lucy Gunning, Alex Impey, Scott Myles, Jimmy Robert, Corin Sworn, and Stina Wirfelt (amongst others). He has collaborated with artists including Romany Dear, Liz Greene, and Alex Impey.

Studio Jamming: Artists’ Collaborations in Scotland (30 June – 2 August 2014) is the first discursive survey to foreground the grassroots character of artists’ collaboration that has contributed to the remarkable achievements of contemporary art in Scotland. Adopting a diverse curatorial approach the project is comprised of exhibitions, a dynamic event series and a Group Critical Writing Residency, culminating in a 12-hour Jamming Symposium.

Among the highlights of Studio Jamming is the presentation of new works from Artists’ Collaborative Groups including Graham Eatough & Graham Fagen, Full Eye, GANGHUT and Henry VIII’s Wives, with exhibition design by Studio Miessen.
Studio Jamming: Artists’ Collaborations in Scotland is an associate exhibition of GENERATION: 25 Years of Contemporary Art in Scotland. GENERATION is a major, nation-wide exhibition programme showcasing some of the best and most significant art to have emerged from Scotland over a period of 25 years. GENERATION offer access to world-class art on an unparalleled scale with over 70 venues across Scotland taking part. It’s free, its exciting and it’s accessible. This is a once in a generation opportunity.
Studio Jamming: Artists’ Collaborations in Scotland is part of the Glasgow 2014 Culture Programme. The Glasgow 2014 Cultural Programme is a national celebration. Culture 2014 will showcase dance, theatre, music, visual arts, comedy and much more in the run up to and after the Commonwealth Games with Festival 2014 transforming the Host City at Games Time. The Cultural Programme is a partnership between the Glasgow 2014 Organising Committee, Glasgow Life and Creative Scotland through National Lottery funding.