Our creative soul – from Bilbao to Dundee 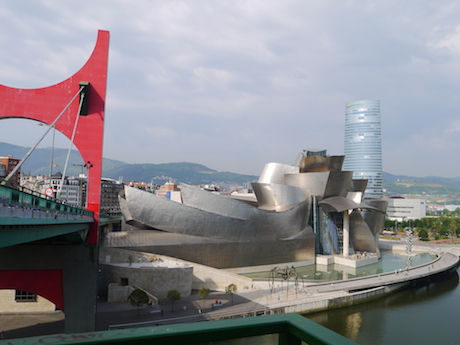 Driving into Bilbao, on the north coast of Spain, there is no need to wonder where the famous Guggenheim Museum is, as you literally have to drive over the bridge into the city right past it – you couldn’t get closer if you tried… Sound like somewhere familiar in the near future?

Although this trip was very much a holiday, we thought it would be useful to share some thoughts on the similarities and key differences between the two seemingly similar cities.

Comparisons between Bilbao and Dundee have of course been made, time and time again. Both places are northern post-industrial cities, set on rivers, redefining themselves through culture, and have fantastic assets in their wider regions – for us it’s the access to the glens, coast and central belt, for Bilbao it’s the coast, proximity to France and La Rioja wine region.

The Guggenheim’s architect, one Frank Gehry, who also designed Dundee’s Maggie’s Centre – his first building in the UK – is probably one of the most famous architects in the world (being featured on the Simpsons is usually a sign of such things, surely). Whilst Gehry has his critics, the building which first opened to the public 1997 has undoubtedly transformed the city beyond recognition. 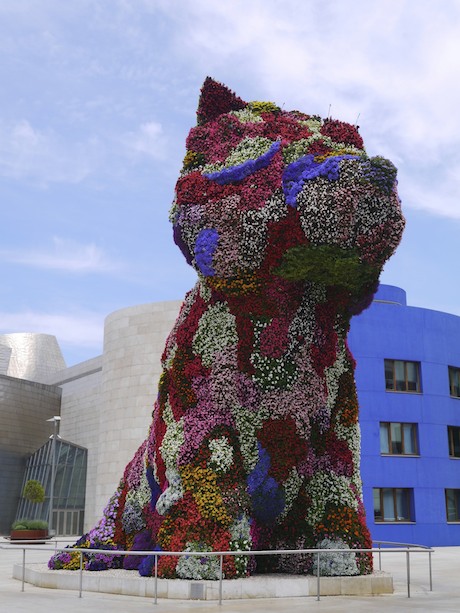 The ‘Bilbao-effect’ is now a fairly well worn term. Essentially by building a huge cultural facility – generally designed by a famous architect – people will come. This term and the impacts also have their fair share of critics, but it is hard to dispute this criticism when you speak to locals who overwhelmingly agree that Bilbao is a very different city to the dark, ugly one of the past.

Bilbao with a population of 349,000 is flooded with tourists, mainly around the Guggenheim of course; beyond there and the old town, tourists are more sparse. We saw many tour buses coming in for one night overnight stays, before moving on to the next destination – which is not ideal when you want the whole city to benefit from the visiting economy.

The below image is of the impressive Alhondiga, a renovated multi-purpose space done by (yet another uber famous designer) Philippe Starck – oddly totally underused when we were there and therefore sadly unoccupied… 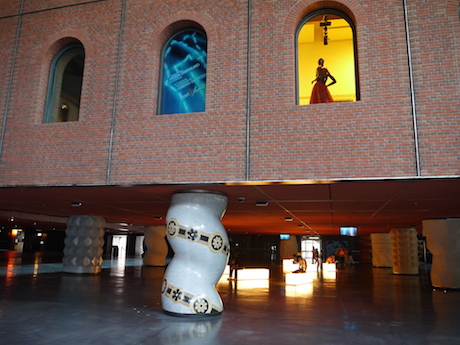 What struck us most in Bilbao was the lack of a visible creative scene, or ‘vibe’ – it was difficult to find details of this online and there was little evidence of grass-roots arts collectives, pop-ups, artist exhibitions or unique/interesting little cafes in the city. Everything felt a bit too structured. Don’t get us wrong, we know there are many great things going on culturally and innovation/science-wise in Bilbao, but we as visitors didn’t get the immediate sense over our few days stay, that there was the same mix of great cultural institutions working alongside bottom-up initiatives that we have here in Dundee. 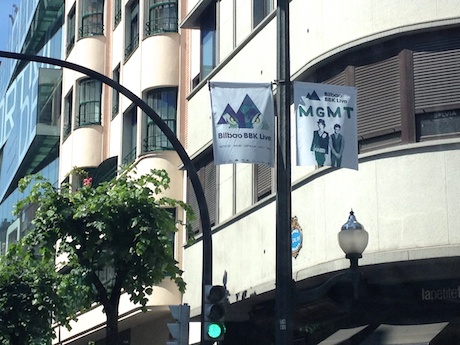 So much well designed promo for BBK Live music festival – no wonder it sells out so quickly.

It’s clear that this city knows how to target a younger audience though, Bilbao BBK Live is their annual music festival, which sees a 109k audience attending the 2 day event. The international line up for next weekend’s sold out event includes Phoenix, The Prodigy, The Black Keys etc. It was the Government who established the festival after failing to secure a motor race; and local bank, BBK, have supported the festival ever since its launch in 2006, which brings in 17.5 million euros into the city. Now, if only Dundee had a major financial institution who started out life in the city and still have their headquarters here, who could sponsor something similar… oh wait a minute… 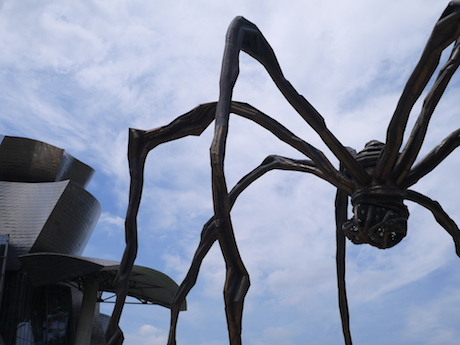 Back to the Guggenheim. Yes it is an amazing building, the exhibitions were good, but as everyone else says, the content is often overshadowed by the architecture. The A-list artist sculptures outside (by Koons, Kapoor, Bourgeois, Buren) are accessible and crowd-pleasing, indeed, but it would be lovely to see some Basque region artists alongside the big names; in the same way as Vitoria’s Artium gallery does (an hour south from Bilbao) and is arguably more awesome because of it.

The A-lister architects also continue south into La Rioja region, with impressive wineries/bodegas to wow the crowds, constructed by Frank Gehry (again), Zaha Hadid, and Santiago Calatrava. Most, well ok, some, have been built with function as well as form in mind. 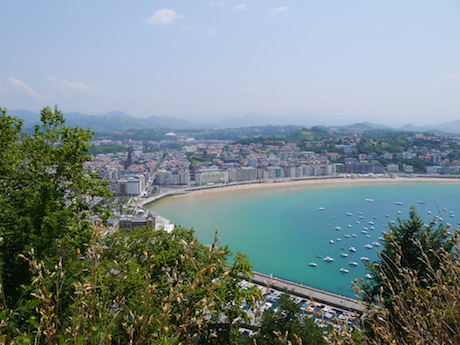 The city of San Sebastián, population 186,000 is worth a mention here – it’s an hour down the east coast from Bilbao; so more similar in size and distance of Dundee to Edinburgh; and will be European Capital of Culture 2016. They are already making it very visible that they have this title – huge banners, info points and lots of online activity about the year are dotted all around the city. It was obvious that they don’t see themselves as an isolated city with one or two landmark icons, but instead part of a connected region which can offer many different things. 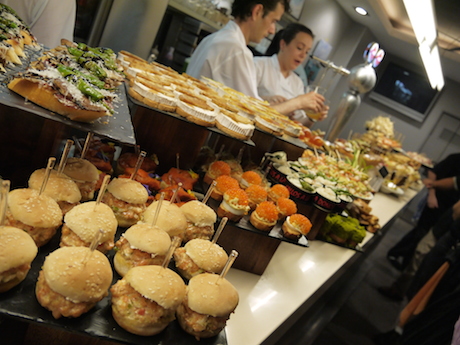 It’s a beautiful coastal city, a popular tourist spot, well known foodie capital, is great for water sports and has heaps of history and culture attached to it. Although we were there just for a day, the energy and attitude in the city was completely different to Bilbao – there was lots going on and we came across people dancing and signing in the streets, just because they fancied it. I’m sure that San Sebastián will make a great capital of culture in a couple of years time – it already feels like one now. 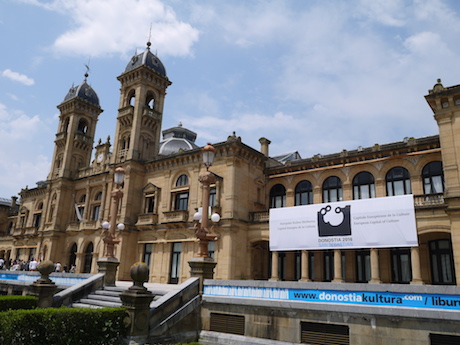 San Sebastian, proud of its European Capital of Culture 2016 status.

Coming back home, it’s made us think even more about what great assets Dundee has, and that there’s simply no real comparison between Dundee and Bilbao. Although we share many similarities, we’re not starting from a similar pre-Guggenheim Bilbao place; and in our view we are more like San Sebastián in size, history and ambition. People and organisations in and around Dundee have decades of experience rooted in delivering and engaging the city in high quality culture (not high culture), crucially our diversity is what makes the city appealing to audiences of all types.

The ‘build it and they will come’ approach can be risky for sure, but Dundee has such a layered offer, then it really makes perfect sense – we have a solid base for continuing to develop the city for locals and visitors alike; providing we keep everything connected and visible, locally, nationally and internationally – which is something Creative Dundee has hopefully played a role in, over the last 6 years.

Let’s just avoid becoming a bucket-list future city destination with slight homogenous tendencies, by continuing to nourish all the many diverse things – big and small – which make Dundee’s creative soul so rich, accessible and welcoming to all.

If you have thoughts on Bilbao, or would like to write a future guest feature on a topic of your choice, then get in touch and tell us a bit more. Contact news@creativedundee.com