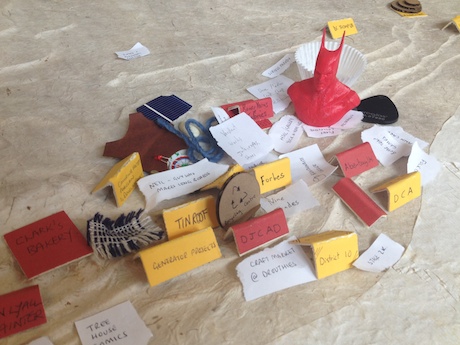 A guest feature for Creative Dundee by Clive Gillman.

Clive Gillman is Director of Dundee Contemporary Arts and co-founder of the Small Society Lab.

Each year during June, DCA becomes host to the Small Society Lab, a pop-up mix of workshops, conversations and demonstrations, all designed to explore the space at which art, technology and community meet. In previous years we’ve featured hyperlocal media; song as a community development tool; conductive ink; and bread-making (amongst other things). This year we chose to look at value – digital value, cash value, cultural value and the value of making – linking each of these topics to the small city of Dundee, which serves as a ideal laboratory for exploring new ideas.

Despite the haunting echoes of the phrase ‘it’s the economy stupid’ that got Bill Clinton elected in 1992 , it is starting to become pretty clear in the 21st century that it’s maybe not just the economy that is going to make a difference – at least not that sense of the economy that means everything needs to valued solely on whether it generates more cash. Taking the key phrase of economist John Kay that ‘activities that are good in themselves are good for the economy, and activities that are bad in themselves are bad for the economy’ we invited former Government Planning Officer Graeme Purves to present a Small Society Lab keynote alongside a presentation of two live pieces of research that are currently underway. Purves – a former Assistant Chief Planner for the Scottish Government and a specialist in the work of Frank Mears (one of Scotland’s first official city planners, the inventor of the modern parachute, and the son-in-law of Patrick Geddes) – presented a thoughtful piece entitled ‘Cultural Cities and Urban Renaissance’ which sought to provide an overview of the ways in which Scottish cities were re-thinking their roles, especially focusing on what might sustainable success look like in the future.

In a quietly inspirational presentation in a hot room he reiterated that real change requires commitment from citizens and long-term thinking. The simple, obvious truth of this came as a welcome and refreshing change from the kinds of banal statements that often accompany keynotes on creativity, usually selling us the salvation that will be brought about by benevolent entrepreneurs.

We all value the culture of our cities – the public response to the recent bid by Dundee to be City of Culture 2017 demonstrated how important the culture of Dundee is to thousands of us. But do we really understand what we mean when we say that we value culture? How does this idea of value connect with all those other, harder, notions of value that drive our daily lives. To help answer this we also had the opportunity to hear from about two PhD research projects being taken forward by Lorenzo Pergola and Ciaran MacDonald of St Andrews University. Each is exploring notions of the value of culture in Dundee and Edinburgh, dipping into the tricky territory of how we value things that cannot necessarily be monetised. They presented two different processes by which value might be understood and showed reports of field work that is currently live.

In the increasingly important field of urbanism, this session provided us with a valuable opportunity to challenge some of the assumptions about how we shape our cities and specifically how we understand what makes a ‘successful’ city. As Justin McGuirk says in his recently published ’Radical Cities: Across Latin America in Search of a New Architecture’, we need to accept the ‘informal city as an unavoidable feature of the urban condition’ – and maybe in Dundee we’re just beginning to understand what this could mean as we link the rich layer of cultural activity that exists here more effectively to the future vision of the city.