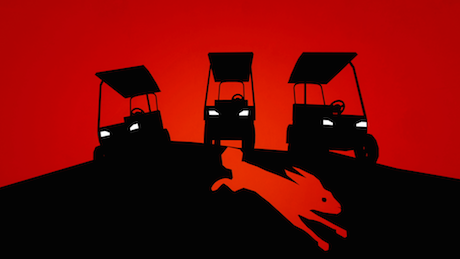 A Dangerous Game, is the follow up to award-winning film You’ve Been Trumped, by Anthony Baxter of Montrose Pictures. It opens in cinemas across Scotland from Friday 5 September 2014.

The screening includes one week at Dundee’s Cineworld from the 5th September and a special one off Q&A Screening with Director Anthony Baxter at Dundee Contemporary Arts on 27th September.

Fearless director Anthony Baxter follows American billionaire Donald Trump and a cast of other greedy and outlandish characters who want to turn some of the Earth’s most precious places into golf courses and playgrounds for the super rich.

Many of the plans are simply bizarre – a space age resort overlooking a medieval town; acres of grass turf flown thousands of miles from Augusta, Georgia to a Middle Eastern desert; and an epic explosion of golf courses in a country (China) where they are supposedly illegal.

And then there is Donald Trump – telling the Scottish Parliament it must stop the country’s renewable energy program because windmills will spoil the view from the golf course he calls the “best in the world.”

The filmmaker The New York Times said “cannot be shaken off” finds the views of local people ignored as developers seek to turn fragile ecosystems into manicured lawns for the pampered and privileged.

In every case, the environmental damage is justified by trickle-down promises of jobs and money that a handful of the world’s wealthiest will bring. But Baxter also discovers a colourful and increasingly savvy array of resistors who believe these promises of economic benefits are absurd – and who aren’t taking it any more.

They are an extraordinary bunch…and include a Croatian schoolteacher, a Scottish salmon fisherman, and a famous film star (Alec Baldwin). What they share is a concern about the environmental, health and economic impact of golf courses that are less recreational facilities, than enclaves for a tiny minority of the world’s wealthiest people.

In this funny, inspiring and at times heartbreaking David vs. Goliath story for the 21st century, the locals don’t give in easily. But as Baxter uncovers, democracy is not always enough to stop the confluence of money, power, and greed. And the clock is ticking.

Visit www.adangerousgame.org for more details and full list of screenings.