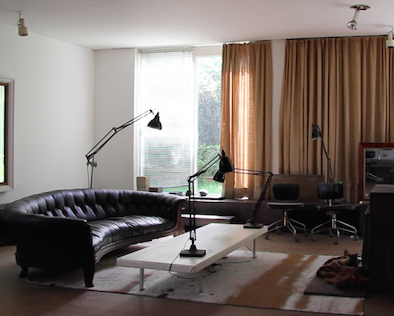 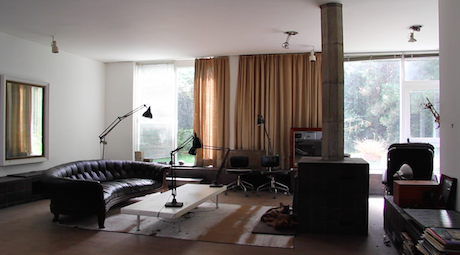 Dundee aims to become a city of design and a concern about a lack of criticality around the city-wide decisions being made – ‘VIEW’ will focus on the physical, social and economic infrastructure of a city as a large scale design process. The exhibition will include both installed and event-based artworks which, through their own processes, highlight a relation that can occur between design and contemporary art; functionality and aesthetics; question posing and problem solving.

This exhibition includes the Scottish Premier of Emily Richardson’s new film ‘3 Church Walk’, recently launched at the BFI London Film Festival. This film records a journey through the derelict home of H. T. Cadbury-Brown. Ami Clarke is an artist, curator and founder of Banner Repeater: a reading room with a public Archive of Artists Publishing, and project space; opening up an experimental space for others, on a working train station platform at Hackney Downs station, London. Ideas that come of publishing, distribution, and dissemination: how the performance of language increasingly impacts upon daily life, are shared in her practice as an artist and curator and inform the working remit of Banner Repeater.

She has recently exhibited/curated works at David Roberts Arts Foundation, Camden Arts Centre and had a solo exhibition in Tokyo, Japan. She continues to commission new artists/writers works through the Banner Repeater platform, and several publishing imprints: Banner Repeater paperbacks, Banner Repeater publishing, and the UNPUBLISH series. She teaches across the UK with a focus on Publishing, Distribution and Dissemination: post-digital art production and publishing. For this exhibition, Clarke presents a body of new work of prints and an alga rhythm that blur the lines between what we might regard as code where ‘saying’ coincides with ‘doing’, through the problems inherent to computational linguistics

Jonathan Baxter and Sarah Gittins (DUO) are the initiators and co-facilitators of Dundee Urban Orchard, a citywide art project that supports individuals and community groups to plant and care for small-scale orchards within Dundee. For this exhibition they have created an apple cold store adorned with wall paintings.

Nicolas Carrier is a film-maker based in Paris who has shown internationally. For this exhibition he hows a recent film, ‘It’s the Ghost’. This film is based in a uncompleted housing estate based in Cork. As an architectural body, they make the recession in urban areas visible and convey a sense of the economic situation and the failure of last century utopias. Contrasting with the young people who spent their time between houses with ball games and bike rides, activities that transform the non-functioning housing complexes in the backdrop of a game, in which the history and meaning does not matter.

Dean Crawford and Henri Meadows are an artistic duo currently based in Newcastle-upon-Tyne. Meadows and Crawford have worked together in the past due to cross over interests and questions about perception and sculptural installation. Now they intend to renovate and transform Generator Projects’ Members Space with a concern for the architectural and user experience. For this exhibition, they present an installed print showing plans for the permanent transformation of Generator’s Members Space in the ceiling space.

Ilana Mitchell is an active and founder member of the collective that run Star and Shadow Cinema, a volunteer run cinema/ cultural space – variously described as a “doughnutocracy” and “structurally inaccurate, ideologically sound.” Ilana is also Artistic Director of Wunderbar. For Wunderbar, Ilana looks to work with artists who are interested in people, in audiences, and in creating dialogue, intrigue and action. She is interested in spontaneity and immediacy, in works that have cultural and political urgency. For View, Ilana is working with Generator to create a temporary, DIY steam room in the gallery. Generator’s DIY Steam Room is part of Sauna Nation, a large scale, international project in development. Sauna Nation will be a one-stop-shop and network for DIY sauna building, and the potential collective uses of saunas, including as conflict resolution and social centres.

Magnus Popplewell is an architectural designer based in Scotland with a love for geometry-driven design, pure mathematics, honest light, and rich, tangible texture. Magnus presents a temporary cinema that is inspired by the work of the architect H. T. Cadbury Brown, who is best known for his contribution to the design of the iconic Brutalist development of the Royal College of Art and earlier work on pavilions for the Festival of Britain in the summer of 1951. Following Cadbury-Brown’s particular interest in the musicality of architecture, Magnus has created a translucent shell reflecting the rhythms and proportions so loved by this pioneering architect.

Richardson’s films have been shown in galleries, museums and festivals internationally including Tulca 2012, Ireland; Chisenhale Gallery, London; Firstsite, Colchester; Maison Europeenne de la Photographie, Paris; Botkyrka Konsthall Sweden; The Wapping Project, London; Artprojx Cinema at the Armory Show, New York; FACT Liverpool; Tate Modern and Tate Britain, London; Danielle Arnaud, London; Wurttembergischer Kunstverein, Stuttgart; Uppsala Museum, Sweden and Venice, Edinburgh, London, Rotterdam and New York Film Festivals. For View, Emily presents her new film, ‘3 Church Walk’ which recently premiered at the BFI London Film Fest. 3 Church Walk is a film about the modernist architect H.T. (Jim) Cadbury Brown’s Suffolk house that he and his wife Betty Dale designed and built in 1962 on a site originally ear marked by the composer Benjamin Britten for the Aldeburgh Festival of Music and the Arts’ first opera stage. The soundtrack is composed from recordings of the objects, surfaces and materials of the house, playing the house as if it were an instrument, much in the same way as Britten played car springs or tea-cups for his compositions, The Burning Fiery Furnace and Noye’s Fludde.