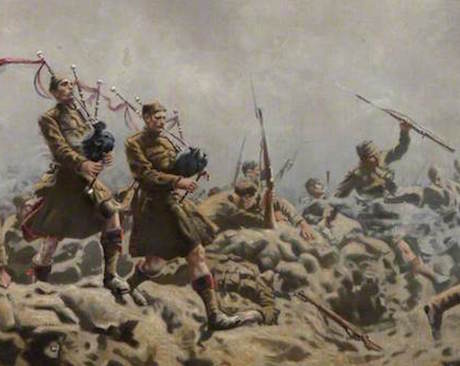 The Great War Dundee Partnership is looking for a Creative Director to co-ordinate content of the Commemorative Battle of Loos Commemorative Concert on 25 September 2015. They are also keen to have a contemporary element to accompany the traditional programme – more details below:

Great War Dundee is seeking a creative director to co-ordinate the content of a Commemorative Concert to mark the centenary of the Battle of Loos. He/she will develop the content of the programme in consultation with the various performers and the Great War Dundee (GWD) steering group. The aim will be to ensure a high-quality, inclusive and relevant programme of music, readings etc with each participating group represented fairly and a good balance achieved between the different styles and elements.

Principal duties:
Identity and secure potential contributors and liaise with them
In consultation with GWD steering group draw up a programme
Ensuring the correct copyright permissions are secured
Identify requirements of performers in terms of equipment etc and, with the support of the GWD Project Officer and Caird Hall staff, manage technical requirements
Ensure performers are aware of timing and administrative arrangements
Manage arrangements on the night, ensuring the smooth running of the event
Assist GWD in marketing the event
Liaise with and report to the GWD Project Officer and steering group

Background
The Great War Dundee partnership was formed in December 2011 and includes representatives from numerous organisations across the city and beyond, including Leisure & Culture Dundee, the University of Dundee, DC Thomson & Co, Dundee City Council, Dundee Heritage Trust, the University of Abertay, the Black Watch Museum, the Western Front Association, the Abertay Historical Society and several others. In July 2014 it received HLF funding to co-ordinate a commemorative events programme for the first two years of the WW1 centenary period.

Commemorative Concert
One of the key events for 2015 will be a concert to mark the centenary of the Battle of Loos, arguably the most devastating conflict of the war for the people of Dundee. The 4th Black Watch (‘Dundee’s Own’) lost 20 of its 21 officers and 235 of its 423 men.

The Caird Hall has been booked for a special evening event which will be far more than just a traditional concert. It will encompass elements of music, poetry, art and drama, brought together to create a moving and atmospheric experience as a fitting commemoration of all of those who lost their lives at the Battle of Loos.

The event is intended to start at 7pm and finish around 10pm including a 30 minute interval. All guests will be given a free commemorative programme marking the event with the support of a local artist. Admission to this event will be free and invitations will be extended to members of communities in Dundee and beyond to ensure widespread inclusion, as well as groups and organisations linked to the commemorations.

Programme
The event will commence with a live screening of the lighting of the beacon on Dundee Law. There will also be footage shown of a pre-recorded event intended to take place at Powrie Brae earlier in the day at the Black Watch memorial statue, with a piper and invited school groups.

The rest of the event will feature a carefully selected programme including the following:

Traditional/classical music:
A variety of well-established groups including military representatives will perform timeless pieces representing and reflecting the Great War. The following organisations have expressed an interest in taking part:
Dundee Symphony Orchestra
Dundee Choral Union
The Wighton Singers
The University of Dundee Choir
Mackenzie Caledonian Pipe Band
Friends of the Caird Hall Organ
The Dundee Bellringers (to ring the steeple bells before the performance)

We hope to involve other relevant groups as well, for example the Black Watch Pipes & Drums. Ideally, the programme would include some national bodies such as the Scottish Ensemble if this can be arranged (this is especially important if Dundee is chosen by the Scottish Government as the venue for the national commemoration of Loos – see below).

One significant part of the programme will be the performance of song settings of the work of Dundee-born war poet Joseph Lee, who fought at the Battle of Loos. Two sets of songs were written by local composer J F Heyde – Ballads of Battle in 1916 and Songs from Somewhere in 1917 – and these will be performed here for the first time since the end of the war.

Apart from this, no specific pieces of music have been chosen as yet.

Contemporary music:
The creative director will also be responsible for identifying musicians (locally and nationally) who can provide a more contemporary response to the same theme, helping us to engage a different audience. This might include new music or reworking of WW1 songs, etc. Sonny Cartyne and the Hazey Janes have been suggested as possibilities here but there will be many others and no one has been approached as yet.

Readings:
As well as the Joseph Lee songs, they would also like to include readings of some of Lee’s best poems. Other readings could include letters and diaries written by soldiers who were involved in the battle.

Dundee Rep Ensemble will be invited to be part of the performance and perform some of the readings, or possibly short dramatic pieces.

Art and design:
As each element of the performance takes place, they would like them to be accompanied by a visual display on the screen, which could be created by local artists and designers, who will be tasked with encapsulating the essence of the theme and/or the music in an innovative and emotive representation. Their designs could also form part of the free commemorative programme.

One particular section of the visual accompaniment will be a scrolling list of the men who lost their lives at the battle.

National Commemoration
Dundee has applied to host the Scottish national commemoration of Loos, and they should hear soon whether or not this has been successful. Assuming that it is, there should be significant national interest in the event and GWD will be in discussions with the BBC and STV with a view to the event being broadcast. Lorraine Kelly, Brian Cox and Jackie Bird have been suggested as potential hosts for the evening.

The Dundee Courier has agreed to cover the concert and other relevant events happening that weekend, and is looking to produce either a one-off supplement or devote its Saturday magazine to the Battle of Loos commemoration. DC Thomson’s other newspapers and periodicals will support the commemoration wherever possible.

Concert budget
A budget of around £6,000 has been provisionally approved by HLF, of which approximately £900 is earmarked for publicity.

Applications
To apply for the role of creative director, please send a CV and covering letter to:
Suzanne Paterson on suzanne.paterson@leisureandculturedundee.com
Applications must be received by Friday 23rd January.