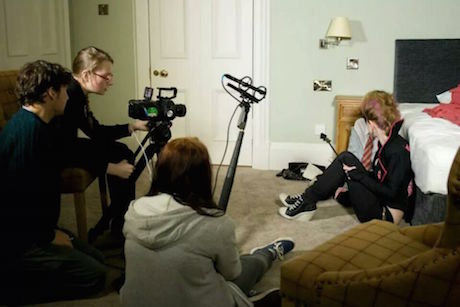 Eight dynamic short films created by young people in Dundee are to be screened by ShortCUTS on 24th January at Wellgate Steps Theatre.

ShortCUTS, a local filmmaking project for young people, will conclude later this month with a screening of eight short films by Dundee youths. The project engaged young people from Coldside, Lochee and Maryfield who would not ordinarily have the chance to participate in filmmaking. Four groups of young people took part in the project, and have been working together for several months to produce their own short film.

Each group worked with a professional filmmaker who mentored them through the filmmaking process. The young people received training in different aspects of filmmaking and combined their skills in acting, photography, dancing, music, design, makeup artistry and project management, to complete their films.

The final eight films range in content and genre, including fiction, as well as documentaries about individuals living in Dundee. The films will be screened for the first time on Saturday 24th Jan at 2.30pm at the Wellgate Steps Theatre.

15 year old Jenny from Lochee was involved in creating the short drama ‘Bitch in Hell’. She says: “My favorite part was meeting new people and getting new experiences with filming. Making a movie isn’t an everyday experience!

I learned a lot about filming from different angles and that it takes a lot of shots to get a scene perfect. We experienced a great deal of the filmmaking process and it has been amazing, I’ve learned so much.

I loved taking part in ShortCUTs and would like to thank everyone who made the opportunity possible. It has given me a once in a lifetime experience, as it’s not everyday you get to create and film your own original movie!”

Jay (Fiction) The story of a young, jobless gang member who is faced with a moral dilemma when he tries to find money for his son’s christmas.

Bitch In Hell (Fiction) A modern day retelling of the Cinderella story, with lots of attitude. Life isn’t an easy ride (Documentary) A young woman recalls her experience of being homeless.

In Care (Documentary) A film looking at how a young person is made to feel while being in care.

Through Thick And Thin (Fiction) An old man wanders between moments of reality and souvenirs.

Alienation (Fiction) A young man who finds out that he has a child on the way sees his circle of friends turn their back on him.

Our Community Space (Documentary) An encounter with a lively community space and its people.

Friary Film Challenge (Documentary) Young people talk about what place faith has in their modern life.

The films contain some swearing and some mature themes and are suitable for audiences aged 12+. No persons under 12 will be admitted without a parent or guardian present.

Tickets are free but limited, and should be booked online here.

Each of the young people who participated in ShortCUTS will be awarded with digital Learning Badges for their CVs from somewhereto_. This is a recognised endorsement that shows the skills the young person has gained and developed through the project.

ShortCUTS is funded by Dundee City Council and Dundee Partnership Community Regeneration Forums of Lochee, Coldside and Maryfield. It is supported by Hot Tap Media in association with somewhereto_, a UKwide project funded by the Big Lottery Fund, which helps 16-25 year olds access unused spaces for free. It is delivered by Dundee events company By Ricochet.