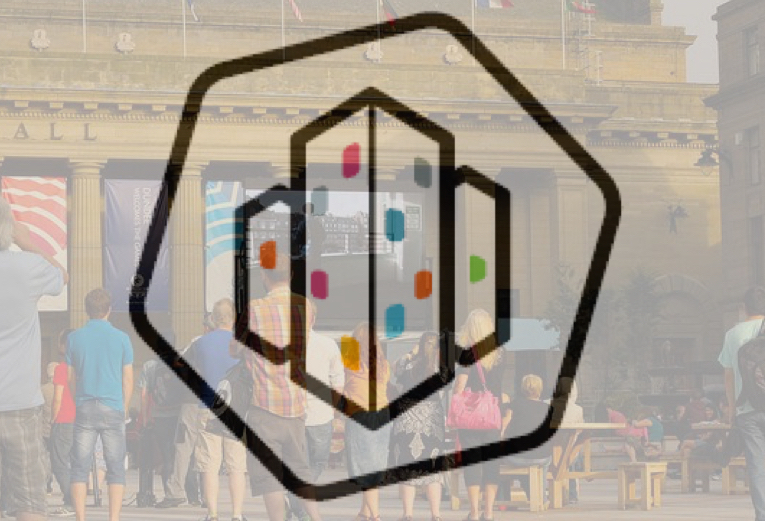 Update: Find out what the European delegation thought of Dundee during their study visit in November 2015 here.

We are pleased to report that Dundee has been selected as a case study demonstrating best practice in cultural/creative industries support, alongside other European cities including Barcelona, Amsterdam, Rotterdam and Lisbon.

Culture for Cities and Regions is part of the EU Creative Europe Programme, delivered by EUROCITIES. The project promotes best practice and the transfer of knowledge to ensure projects in cities and regions throughout Europe place culture at the heart of their development strategies.

The chosen case study about Dundee titled ‘Creative Industries: Support for Growth‘, highlights the challenges, strengths and activities happening in Dundee to grow the creative industries and tackle issues such as talent retention and attraction.

One of 70 case studies from across Europe selected from 181 applications; other European UNESCO Cities of Design have also been selected as studies alongside Dundee, including Bilbao, Helsinki, Turin and Berlin. Dundee has also been chosen as one of just 15 cities to host a study visit by people working in this field across Europe later this year.

Dundee is the only Scottish city to be included and one of only 5 from the UK, which include: Derry-Londonderry, the UK City of Culture in 2013; and Liverpool, former European Capital of Culture. The case study was written and submitted by Dundee City Council; and Creative Dundee is pleased to have been referenced along with other organisations doing good work in this area. For us, this case study is important recognition for everyone who works within the creative industries in Dundee – practitioners, collectives, organisations and businesses.

This is great timing, coming after the city’s designation of UNESCO City of Design earlier this year; and ahead of the The Scottish Affairs Committee inquiry into the creative industries in Scotland, which will see MPs visit Dundee and Edinburgh for its evidence sessions this Autumn. Then next year it is Scotland’s Year of Innovation, Architecture and Design 2016 which will celebrate the role of creativity and innovation across the country – this study is another solid step in the right direction.

All case studies can be viewed and downloaded here and the European project can be followed on Twitter: #CultureforCitiesRegions 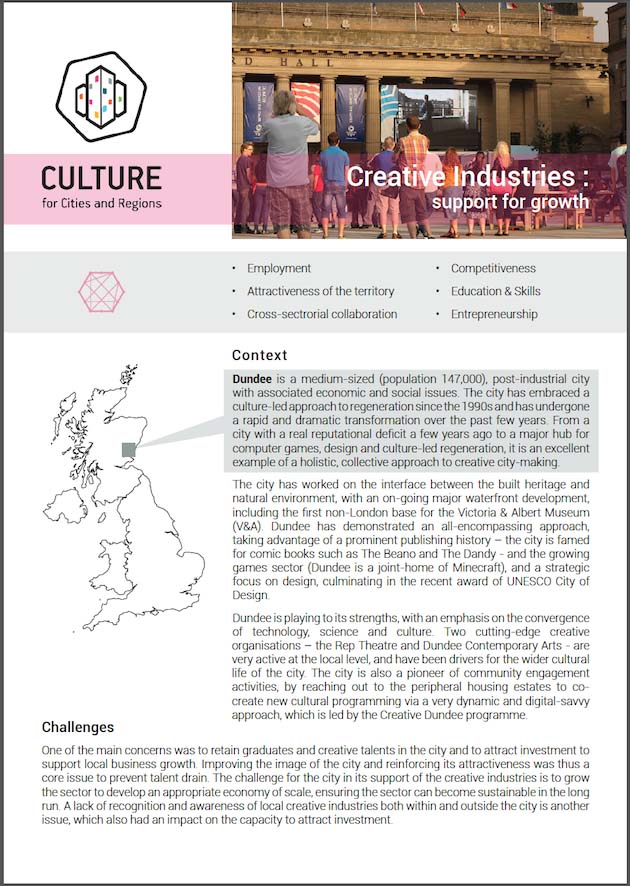 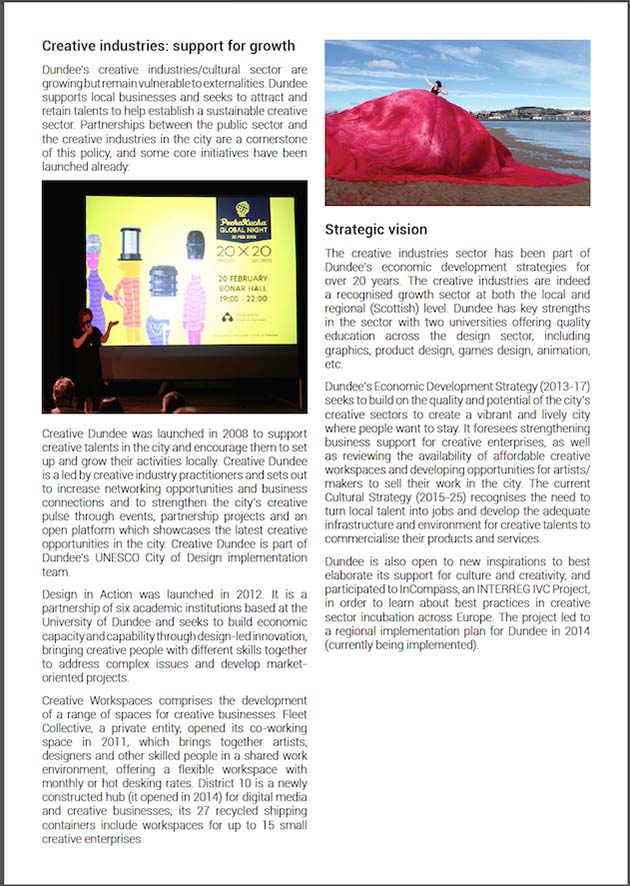 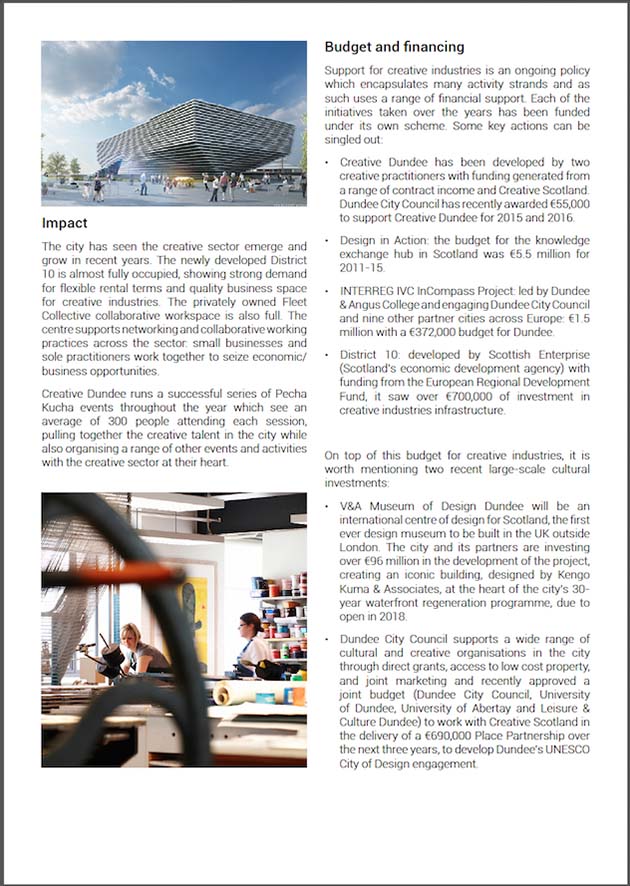 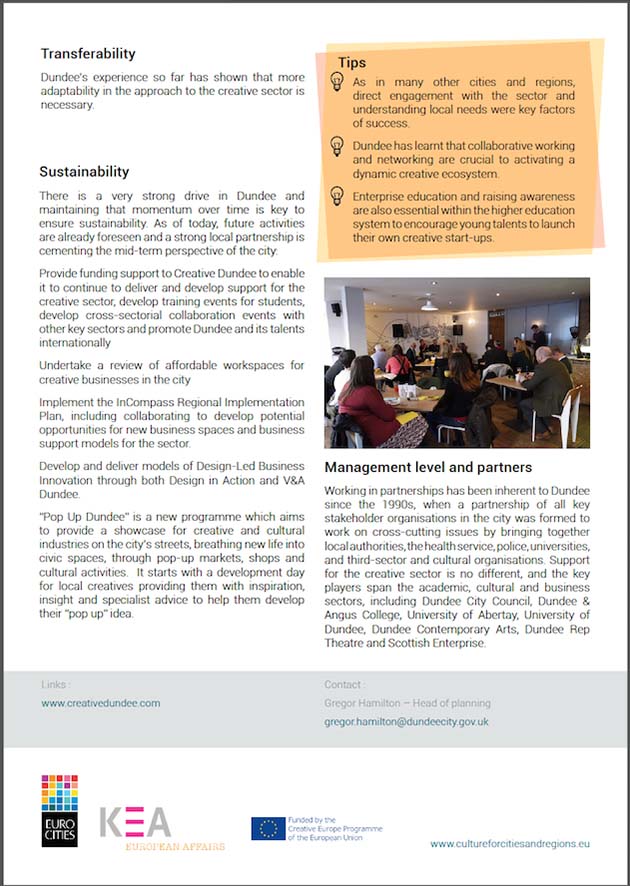