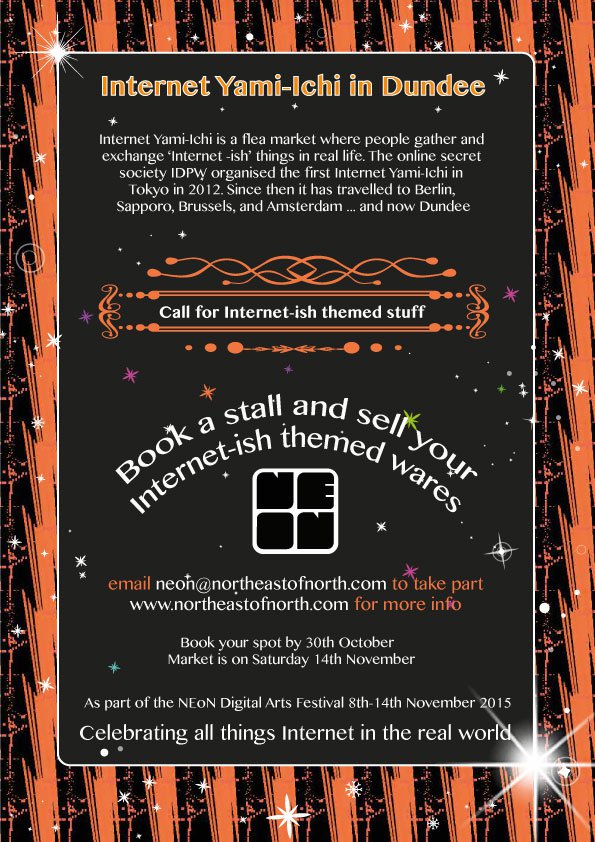 As part of NEoN Digital Arts Festival’s programme of events this year, the team have organised an internet Yami-ichi on Saturday 14th November. An Internet Yami-­ichi is a flea market where people gather and exchange “Internet­-ish” things in real life. The online secret society IDPW organized the first Internet Yami-ichi in Tokyo in 2012 and since then it has travelled to Berlin, Sapporo , Brussels, and Amsterdam.
Past items sold have included glitch embroidery, apps rejected by Apple, Internet Panties, Internet flavoured tea, lost memes and actual SPAM mail.

The Japanese word “Yami-Ichi” means “black market”, however the word ‘Yami’ means “sick for” or “addicted to” which makes this market perfect for people who are obsessed with the Internet.

What is the Internet Yami-ichi?

• It’s an off-line Internet-themed flea market
• It’s an attempt to let some fresh air into the world of the Internet–which starting to feel a bit uptight–by downloading our Internet activities to exchange in the actual world, as a flea market
• Yami = Dark side, “sick for”, “addicted to”, etc

To book your spot email neon@northeastofnorth.com with Yami-­Ichi as the subject. Book by 30th October for the market on Saturday 14th November.