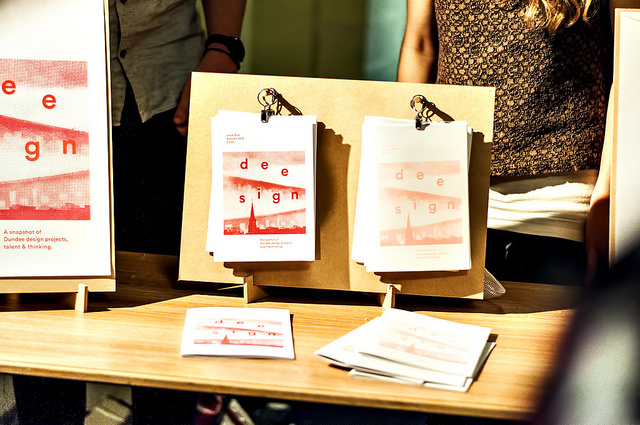 Deesign Magazine is a physical publication showcasing Dundee based design projects from all disciplines and they have just released their first issue. If you attended Pecha Kucha Volume 13 on 10th November, you will have seen a pop-up stand for the magazine.

The magazine, produced by DJCAD Interaction Design student Richard Cahill features projects which are submitted & hand picked by an impartial curatorial team aiming to give the best cross spectrum snapshot of the Dundee design scene. Deesign Magazine aims to highlight design as an integral part of the creation process and as a means of problem solving – not just an end polish.

Alongside projects, every issue contains two contributed essays focusing on anything related to design or design thinking.

Issue 1 of Deesign Magazine being printed by Out of The Blue Print.

The project is supported by Creative Dundee and additional issues are planned for release throughout 2016 – Scotland’s Year of Innovation, Architecture and Design during which Dundee’s UNESCO City of Design status will be at the forefront.

In order to remain impartial, the layout for each printed issue of the magazine is randomly generated by a specially created online tool available at lab.designmag.co.uk/generator. Generation of each issue can vary from 1 millisecond to 10 minutes and each issue will tell the reader how long it takes on the back cover. Issue 1 took 1401.43 seconds (around 23 minutes) to generate.

You can purchase Issue 1 of Deesign magazine here or by clicking the below preview.