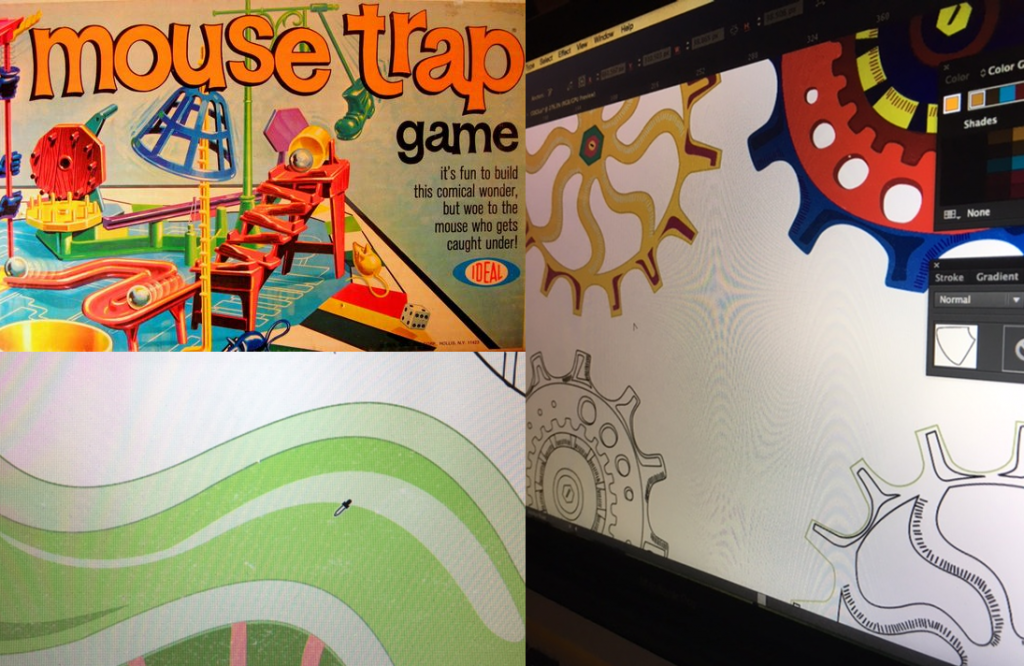 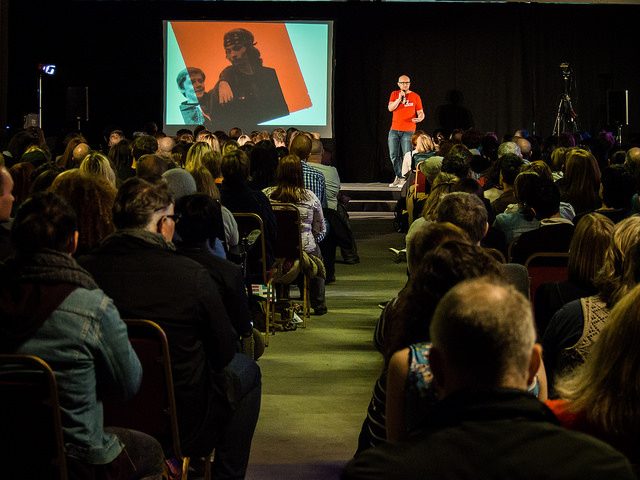 A feature by Jasmine Holt.

As this summer was my last before facing the big bad adult world, I decided to take a different tack before returning to DJCAD for my final year studying Illustration. Typically between the months of May and September, you may be inclined to think that the expense of travelling to South-East Asia just about halved purely from the saturation of photos on the Instagram feeds of most students in art education. Presented with this considerable amount of free time and a desire to spend my last summer in Dundee, I decided to take advantage of the city whilst still at University.

Since the beginning of May, I’ve been working with Creative Dundee to identify stories and track the journeys of those who have attended and spoken at Pecha Kucha Night Dundee. These nights are an opportunity for speakers to stand up in front of a room of like-minded people – from architects to fashion designers; students to accountants – and share their stories, projects and passions. Creative Dundee had realised that the experience was incredibly varied for each audience member and that coming to Pecha Kucha Dundee had a tendency to alter the paths of those open to new experiences and connections. It was such an intriguing project because, in it’s essence, it was entirely human. I was researching real, local people and Pecha Kucha will continue to affect the lives of attendees in some way or another. As always, when there is a human element involved, a project springs to life with complete ease – and luckily, Pecha Kucha speakers are a talkative bunch. Ultimately, the goal was to let the research guide us to a creative and engaging way of representing our ﬁndings and to highlight this to the Pecha Kucha community.

We took a windy path, fuelled by tea and coffee to get there. 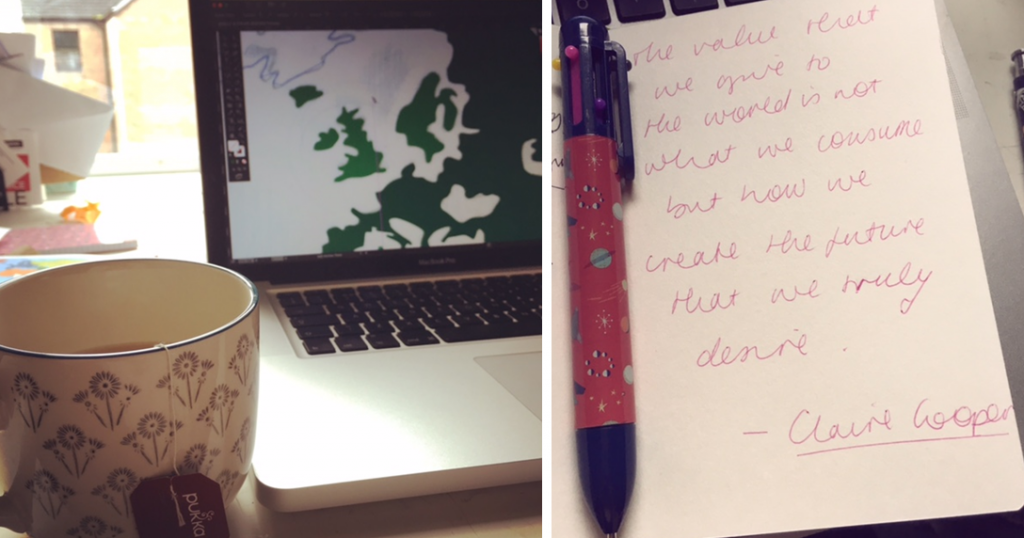 We began by collecting information – I wrote a short feature about the project and we sent out a survey. This presented a really interesting opportunity as we were reaching out to a creative audience. Creatives don’t respond conventionally to surveys so we did ours a little differently – along with the research questions I designed a printable template of a timeline, something for people to get their hands on and interpret as they pleased.

We also decided to meet with some of the speakers in person who we felt would have something to say about the project. This was incredibly important because at no point could this project become abstract. Following this notion, we visited most of the speakers in their workplace which really helped me build a relatable framework for our ﬁndings and place these people and their journeys within their own worlds. It’s all very well and good listening to a carefully constructed Pecha Kucha talk, but nothing beats actually walking into someone’s space to gain a deeper understanding of their working process.

Doing things in such an organic way was useful for myself. I had conducted interviews before but never on such a personal level, and never with a large project in tow. Background research and a serious amount of prep work for each of those chats has certainly set me up for anything similar in my working life. In some of these meetings I also asked the speakers to cut a piece of paper into the shape that they felt their life had taken since speaking at Pecha Kucha Dundee. It got them thinking about the experience as a whole and worked much more effectively than I had anticipated. 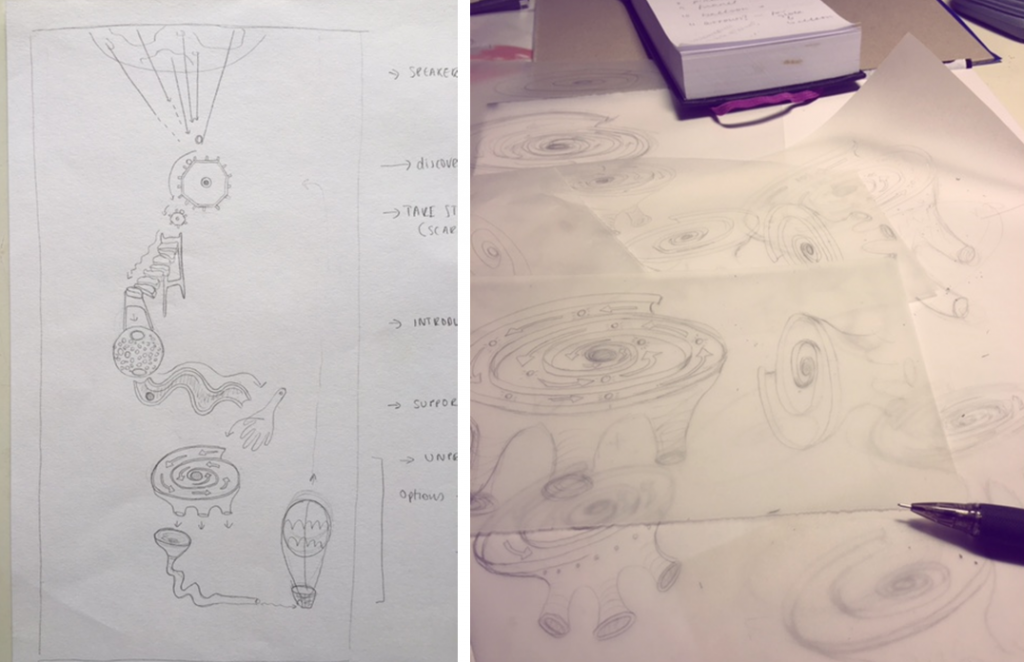 From this point, it was design time – the part that I had the most experience in however I knew it would be a challenge. The plan was to design a website with the information discovered, something I’d only ever done once before. I got comfortable in the only way that I knew how – sketchbooks! I wrote down everything that I knew, picked out everything of value from each interview and linked quotes from different speakers to important points. It was messy, but it was less messy on paper than it was to keep all those thoughts in my mind!

The more that I thought about the project and what it was really about, at it’s core, the more that I came back to the word “journey”. From what I had gathered it wasn’t a simple or predictable journey, but it was interesting and fun. I also knew that because a person’s personal or professional journey is constantly changing and evolving, most of the elements on the page would need to move to connect or show some form of direction. There was no way that a subject with so much to say could be static.

I thought of the game Mouse Trap, where a little metal ball moves along lots of colourful parts and makes things fall on the board. It appealed to me graphically and I thought it would be a great illustrative project to invent some game elements myself. Each part that the ball interacted with would signify a different stage in the journey of a speaker or attendee, and it all ﬂowed pretty naturally from there.

Presenting all of this to the team at Creative Dundee was really helpful. After putting together a Pinterest board to give the team an insight into my inspiration, I showed them prototype sketches along with my research to highlight links between the two. Their feedback helped me to create key frames (particularly the end frame) for our next meeting. Unfortunately at that point, my laptop decided that it was not on board with the project and had a incredibly well-timed meltdown. Thankfully, everything at that stage could be done by hand or this project would still be ongoing.

Three weeks later I had learned a new programme to animate the website, designed and created all of the vectors, picked colour palettes and assembled separate desktop and mobile sites. To be honest, it still hasn’t sunk in- maybe I still need more sleep. When I sent out my CV at the end of April, I had absolutely no idea what to expect but this has by far surpassed what I could have imagined. This whole adventure came from following several similar pieces of advice telling me to get experience before graduation, gain some insight and speak to people who work in the field that I might want to work in one day. It’s been a fantastic opportunity to inject what I already know about the design process into a real life context and I’m so glad that I pushed myself to get out there and try it.

I’ve learned that independence is both necessary and malleable. In other words, it’s okay to ask for help – something that I was told but didn’t quite believe until I fully experienced it for myself. People in the creative sector will usually be more than happy to help and will understand that you need to learn as you go along, as they had to at some point in their career. It was so refreshing, and honestly has made me feel much better about graduating (although it still terriﬁes me!) knowing that there are so many people who want to nurture their creative community and will be just as enthused as you are about worthwhile creative work.