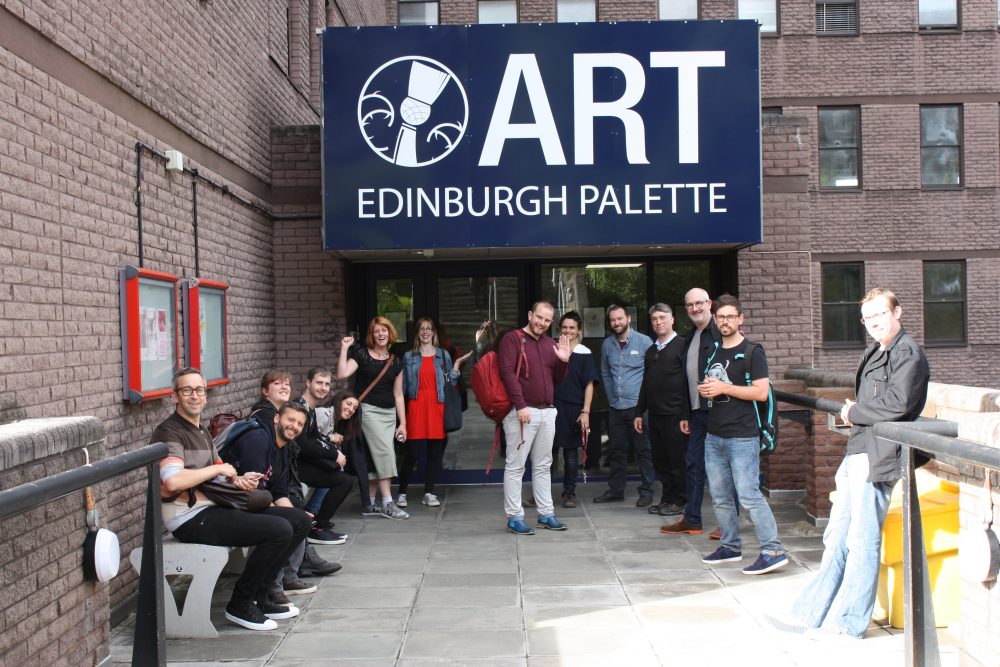 Fabric Dundee, which helped form Dundee’s first Creative Industries Strategy has been relaunched into a creative leadership programme for the city in December 2018 – Read more about Fabric.

If you know the city, then you will know how vibrant Dundee’s co-working and creative hot-desking scene is – you can find out more about the city’s creative hubs here. We are always keen to explore what other cities are doing to support their creative communities, so on 5 September 2016, Creative Dundee set sail to Edinburgh with some members of Fabric Dundee to visit creative co-working spaces in the capital. This blog includes a quick recap from the day.

Our first visit was to Creative Scotland – the public body that supports the arts, screen and creative industries across Scotland. Although not a co-working space, we met with Leah, Creative Industries Officer for Craft and Karen, Place Partnership & Communities Officer at the Creative Scotland office, who shared what they did.

Leah and Karen explained the different departments that the organisation have and how they engage with the creative communities across Scotland. Creative Scotland work on a number of projects including Time To Shine which supports people under 25s to flourish through arts and creativity. They also gave us a snapshot of their peer review system that pairs peers with cultural organisations to help them assess themselves and their projects by looking at their intention statements and how they work to meet their means. Although this could be time consuming for the organisations and individuals taking part it should no doubt benefit the sector to start a conversation about quality, good practices and processes, beyond judging success exclusively on results.

Other than funding creative organisations and projects, Creative Scotland advocate for the creative sector by bringing people, arts and communities together. The organisation also act as a national representatives at The Scottish Parliament and Westminster, inviting individuals to come and ask questions on various subjects such as the music education in Scotland or the impacts of the Brexit.

After our chat, we got a quick tour of the office which featured a library full of books that show the creativity in Scotland – including projects Creative Scotland have funded. The tour ended with a quick trip to the building’s roof garden, a tranquil space overlooking the city.

Next stop was Codebase, the largest technology incubator in the UK which sits just below Edinburgh Castle. Codebase worked in partnership with Creative Edinburgh to develop a Creative Floor, home to organisations such as photographers, graphic designers, architects, fashion designers and illustrators. It was apparent that all residents enjoyed working in Codebase – each studio was shared with 2-4 people and residents were able to add their own creative flair to their space.

Then we met with two of Codebase’s Directors, who explained that Codebase have a mission to help up and coming tech companies in Edinburgh who have about 3 – 5 staff members grow to companies of 50+ employees. This is done through mentoring, tech and marketing meetups, and a sense of community in the space. They also explained that by introducing creative people, they aim to build shorter paths for tech and creative community to collaborate from the early stage of producing ideas and new projects.

At the moment Codebase offers tenancy only, but they hope to develop new support offers for their community.

Out of The Blue

Our third visit of the day was to Out of The Blue, an arts and education trust in Leith which provides space and a community for jewellers, artists, designers, musicians, dancers and architects. Out of the Blue is situated in a former military drill hall built in 1901 for the Royal Scots Regiment. The building was used as a barracks, training centre and housed military vehicles so provides a uniquely large and impressive space filled with creativity.

Nicole, Artists Services Manager showed us around the venue which they moved into back in 2003. This included dance halls, design studios and their main hall which provides an exhibition and events space available for hire. For the first few years Out of The Blue took on the drill hall, it was only open to the public for exhibitions however the team felt they should engage with the local community so they opened a cafe which has since been featured in The List’s Eating & Drinking Guide – and provided a great lunch for our group.

Out of The Blue encourage as many different art forms in the building as possible, which includes studio space for jewellers and a music studio for acts to practice their work. In addition to this, they partner with a number of organisations to work on different projects which either engage with the local community or benefit their residents. It was apparent that there was a lot of grassroots creativity here.

Our final visit was to Edinburgh Palette, perfectly described by ArtWork as, “An indie arts centre housed in a former Government office block which, despite its daunting exterior, is a hive of creative energy.”

After a lovely warm welcome, Dale and Dundee born Sofia explained more about the massive venue which has around 400 residents including collectives, artists and designers. Dale and Sofia encourage residents to talk and connect with each other, helping collaboration by providing space and networking opportunities. Edinburgh Palette exists to help people get their idea started without the risk and danger of doing it themselves, providing studio/workshop space and mentoring for those based in the building.

We took a tour of the venue which included; a theatre rented out by a small group who work with children to develop their confidence and learn French through performing; Edinburgh Judo which also houses the Kelly Holmes Trust; and a library designed and created by volunteers. What struck is that every floor has a kitchen space with free coffee and biscuits, something that encourages residents to speak to each other and has lead to a number of collaborations.

After trekking around the jaw dropping building, we were shown the three gallery exhibition spaces in Edinburgh Palette. The most impressive space, Gallery 1, is a massive venue which has been used for fashion shows including the Edinburgh College of Art annual Degree Show pre-exhibition, and has even been visited by Carla Bruni, wife of former French president Nicolas Sarkozy. It was interesting to see how a building which a bit of a dull history had been reborn to house such creativity. We were blown away by Edinburgh Palette and would love to see Dundee provide a similar experience for local creatives.

Space – Despite having different motives for starting a coworking hub, we all share the same challenges when looking for affordable and appropriate spaces. Whether the spaces were filled through organic growth or curation, high quality offers make a positive impact in the local community, and although these spaces have different approaches, they all have something in common: they are people focused.

The spaces we visited in Edinburgh had something else in common, they looked at regenerating old or unused buildings to inject creative blood in the city. Dundee has done a bit of this too with the birth of Fleet Collective and WASPS Meadow Mills but could do a lot more. There are a number of empty spaces in the city which could be home to creative collectives or coworking hubs, however we need to open a dialogue with local authorities and private landlords to encourage and facilitate new, alternative ways to use these vacant spaces.

Funding – There was a debate on the minibus as to whether or not it would be best for a hub to be publically or privately funded. Whilst both have their positives, it was interesting to learn that only one of the hubs we visited received public funding as a small portion of their business.

Technology – There are only a few organisations who connect the technology industries with health, social, arts and culture in Dundee. It would be great to see the creative sector work more closely with others in the city to develop exciting collaborative projects that encourage creatives to remain based in the city.

We’d like to thank Creative Scotland, Codebase, Creative Edinburgh, Out of The Blue and Edinburgh Palette for hosting us. We really enjoyed our visits and have lots of ideas buzzing around our heads.

We’d also like to thank Scottish Community Alliance for supporting the trip through the Community Learning Exchange Fund, and Dundee Social Enterprise Network for providing the minibus.