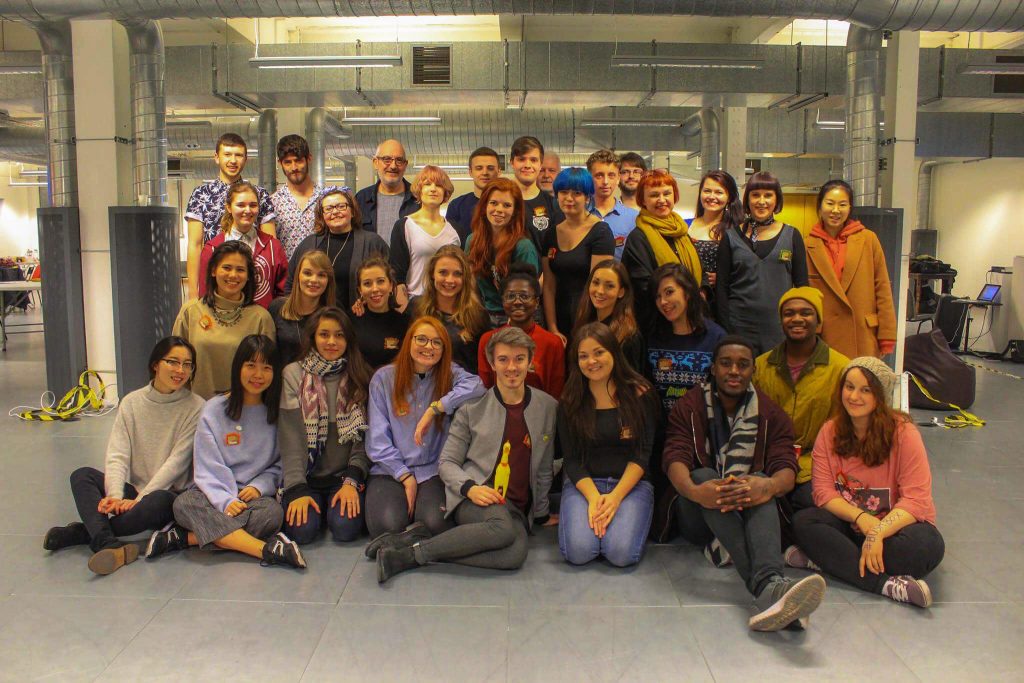 The Global Service Jam is 7 years old, and over the years the Jams have seen thousands of people come together in hundreds of cities across the globe with just 48 hours to change the world. In our first year back in 2013, we were 9th biggest in the world – bigger than both Los Angles and New York –  beaten only by London in the UK, a feat that we were incredibly proud of. This year however, on Dundee’s 5th anniversary of Jamming, we became the biggest service jam in the entire world!

On the Friday evening, all Global Service Jams discovered the secret theme – this year it was “Hello? Lo? O? O.” People from different disciplines and backgrounds then naturally began to cluster in to groups, choosing a sub-issue or theme that they all want to address; from sound to breaking barriers, a multitude of ideas were explored.

In true jam spirit, we’re about doing and not just talking. On the Saturday, teams took to the streets to understand their themes from the public’s perspectives which was an invaluable experience. Teams then took until Sunday afternoon to prototype and refine their concepts. Throughout the weekend we communicated with Los Angeles, Istanbul, Riyadh, Amsterdam and Glasgow – sharing our ideas and work as we went along.

Below are some of the concepts created during the weekend. 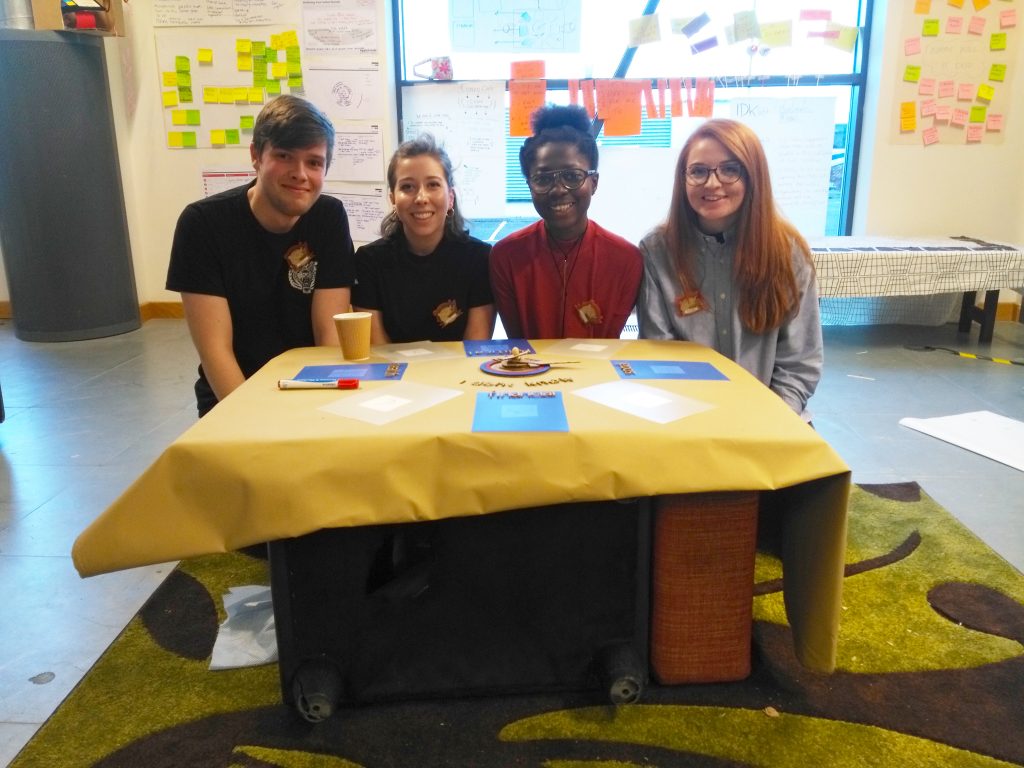 Working with our sub-theme ‘breaking barriers’, our field research revealed that the barriers people face in their everyday lives are diverse and widespread. A common subject was how limiting today’s electronic communication is, as opposed to face-to-face contact. From this focus, we created IDKloth: a tool to encourage community engagement and aid discussion.

Comprising of a simple table cloth featuring different topics of conversation and a dial central to these, the IDKloth is easy to use – almost like a game of twister concerning thoughts and feelings as opposed to physical activity. The dial is swung to a random position, and whichever topic it lands on will decide the theme for a discussion between participants. Its water resistant coating allows it to be written on, drawn on and reused.

The design of the IDKloth means it can be introduced into cafés, schools and organisations to create a safe, non-judgemental environment where the community can express any ‘I don’t know’ issues that might be troubling them. 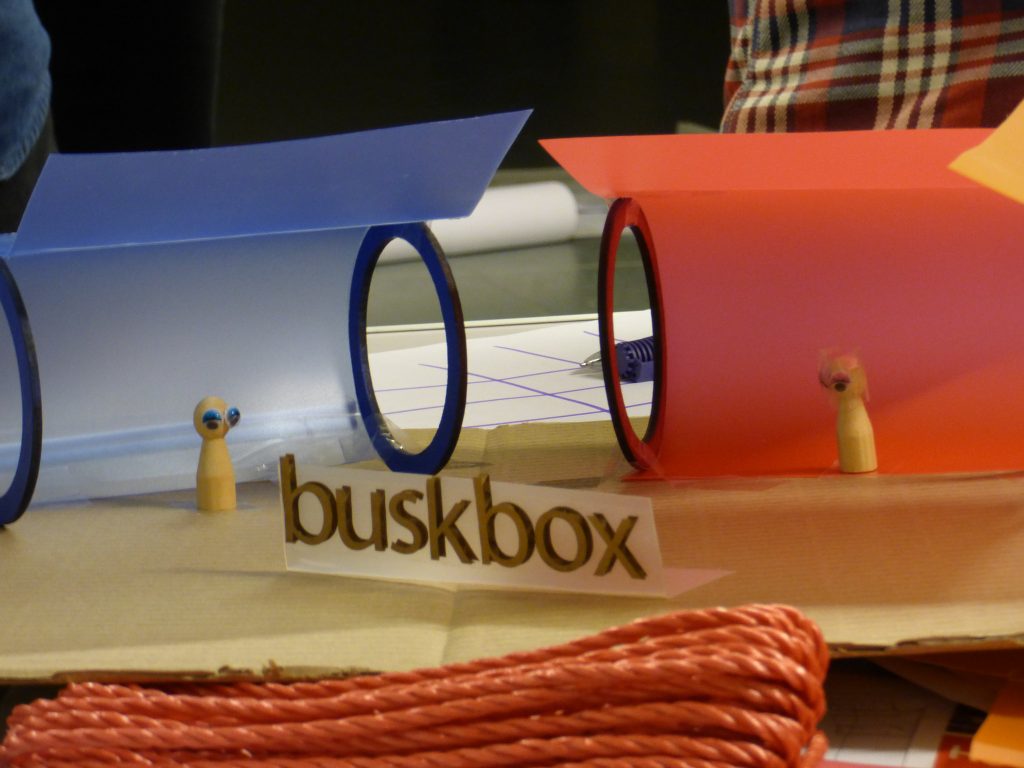 The theme for our project was sound and our aim was to enhance the public’s relationship with it. Through research, we found that Dundee’s vibrant and expressive side to its culture had taken a steep decline, especially the reach it had to the masses.  We found this out by approaching different users of sound – those hard of hearing, those who sell musical instruments, those who performed with sound in public spaces and the audience that passed by them. Each was connected through a sense of place and understanding of Dundee’s culture. By creating the vibrant coloured open busker boxes, we essentially streamlined all the events and entertainment into one spot which can be easily accessible by anyone. This would allow cafés, retail shops, art venues, and more to rent them out and enable buskers to have a platform to perform. We wanted the community that surrounded Dundee to help its culture by the hand, using sound as the catalyst. 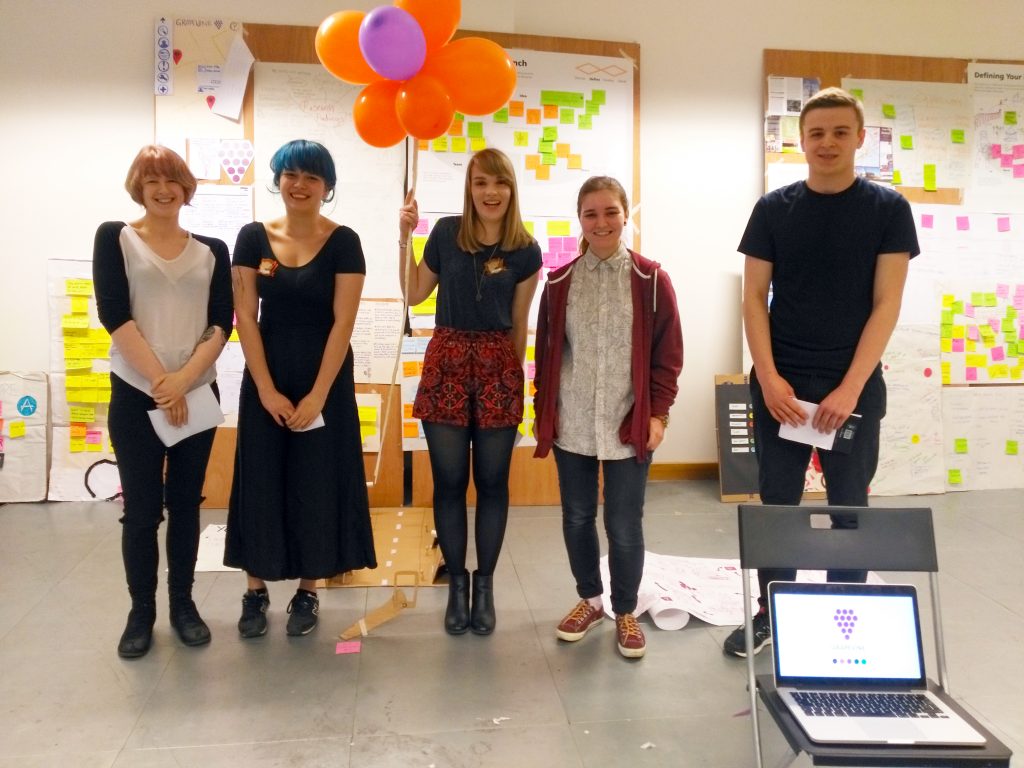 Team Grapevine decided to make their project around the theme of social media. Initial steps included research into usage trends and gauging positive/negative views on the streets of Dundee. After hitting the city centre, the findings implicated that most people had positive views of social media and used certain apps to connect with friends and family. When thinking about how people communicate and how they met up, a new app was created – Grapevine. Grapevine is a streamlined, user generated event app which aims to co-locate elements of Facebook, Twitter and Google Maps to allow greater transparency of local venues. The team believes that Grapevine would allow users to discover deals and events in their area. In addition, they would be able to see if their friends or ‘bunch’ are interested in these events. Obviously one weekend isn’t enough time to work out this idea properly, but it is interesting given the challenges facing the current market and ideas based around the transparency of information.

A huge well done to everyone involved, our mentors, speakers, organisers and participants, you made the jam!  We’d also like to say a huge thank you to all our sponsors: Fraser’s Fruit and Veg, Incredible Edibles, NEoN, Papa John’s Dundee, UNESCO City of Design Dundee, and Urban Print – you all helped Dundee lead on a global scale.