Put Your Foot Down 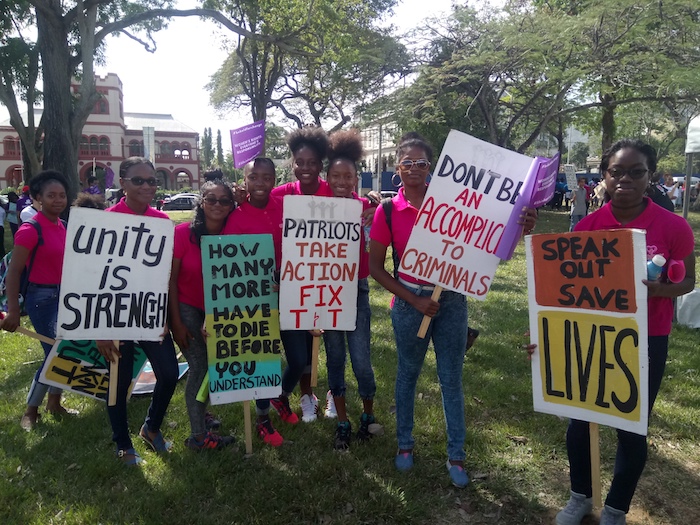 Guest post by Dundee based artist, Joanna Helfer who is currently on an eight week residency at contemporary arts space and network, Alice Yard in Trinidad as part of the British Council’s Transatlantic Artists Residency Exchange (#BCTAARE).  She is writing a weekly journal documenting her exploration of Trinidad and her work in progress.

Late last Monday night, after around 30 hours of travelling, I arrived at Alice Yard in the Woodbrook neighbourhood of Port of Spain, Trinidad, to begin my residency for the British Council’s Transatlantic Artists Residency Exchange (TAARE).

I left my house in Tayport at 3pm on Sunday, got a taxi up to my studio on Tannadice Street, then down to the ceramics workshop to leave my keys and all my responsibilities behind. After another taxi to the station I took the train to Edinburgh to fit in a visit to my grandparents before leaving, quickly sipping tea from antique willow pattern cups. At midnight I caught the bus to Glasgow, another bus to the airport, then a lot of waiting. I tried to explain through my sleep deprived muggy mind to friendly and inquisitive Glaswegians what on earth I was doing, I still don’t know. It was a short flight down to London with all the suited business folks on the way to a 9am meeting in the city followed by the long-haul from London, touchdown in Saint Lucia (where all the straw-hatted and linen-shirted tourists disembarked) and a short hop over to Port of Spain. After a simple immigration check (what kinda art you make?) I was here. The only thing obstructing my journey was the trade winds, causing a bad patch of turbulence across the Atlantic. Perhaps a portent of our times. 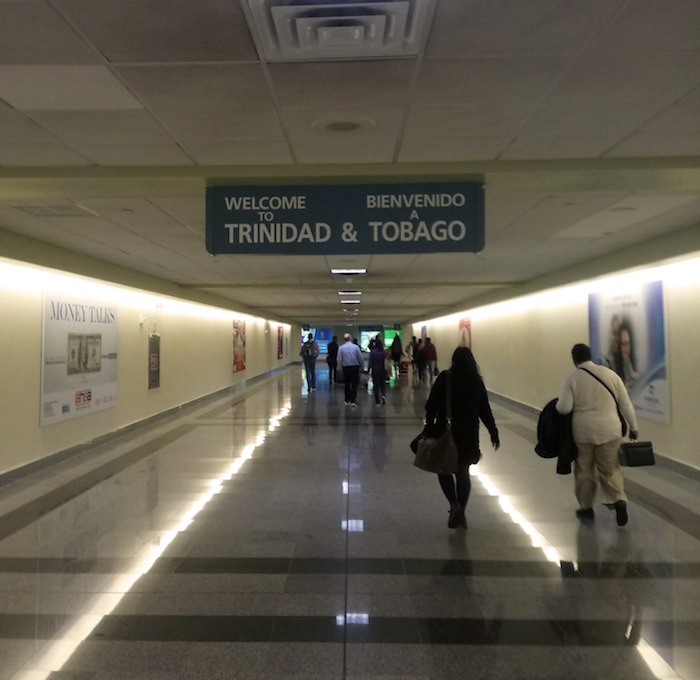 The sense of displacement was profound. My apartment is different to any space I have occupied before – there are sections cut out of the walls, holes to the outside that sound, smell, voices and insects travel freely through. One wall is glass – a sheet of fabric barely shielding me from the gaze of all the visitors to the yard, gaps in the wooden slatted blinds rendering me immobile, utterly self conscious, transparent. The boundaries between inside and outside almost obliterated. It took me a few days to overcome my crushing anxiety and embrace the fluidity and tension of occupying a location which is a crossroads and citadel at the same time. 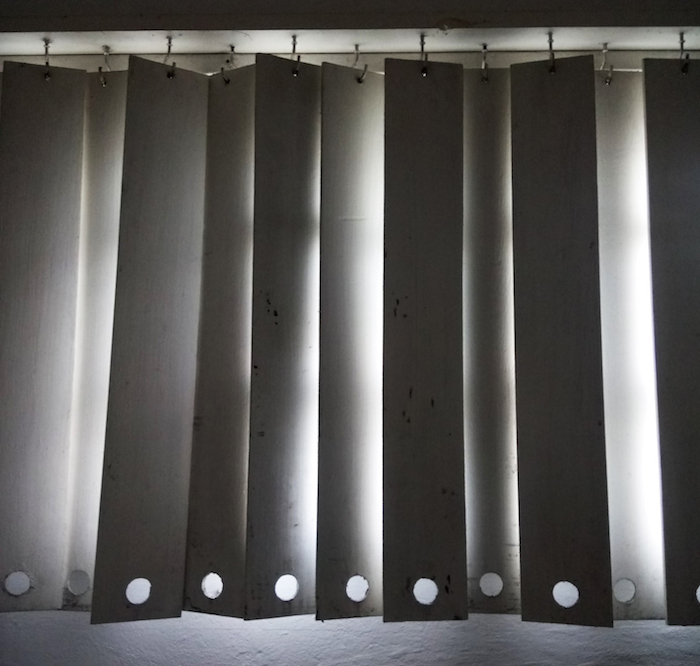 I am always where I am.

Port of Spain is listed in the top ten most dangerous cities in the world. I am repeatedly warned to be careful and to avoid walking alone, especially at night. In 2016 there were 478 murders in Trinidad and Tobago, and the recent grassroots mobilisation of activists across the Caribbean for women’s rights have recorded a disturbing rise in violence and harassment towards women and girls throughout the region. My proposal for this residency, which involves walking around the local region, takes on a whole new element, one which is overwhelmingly aware of the fragility and softness of my body, and otherness – my femininity, whiteness, privilege and ignorance. There is virtually no public transport here, and cars are heavily relied upon for personal transportation, buoyed by the extraction of oil and natural gas in local waters, an industry which defines the island to a surprising (to me) degree. On Saturday 11th of March, 6 nations across the Caribbean engaged in a women’s rights demonstration to commemorate International Women’s Day. This sprung out of a movement which began in Barbados when women started to share their experiences of sexual harassment and institutionalised sexual and gender based violence using the hashtag #lifeinleggings. This quickly gained traction as women across the region shared their everyday encounters on social media. In Trinidad and Tobago several activist groups worked together to organise the demonstration and march in Port of Spain. I found the event incredibly moving. There were many younger women and girls present, and the march around Queen’s Park Savannah was led by all the girls under the age of 10, in a powerful gesture of intent – these girls should not grow up in a world where their rights and safety are compromised.

On Saturday morning I joined fellow TAARE artist Josh Lu for a trip around Port of Spain (he will be travelling to London in May). Josh’s practice is concerned with the complex history and memory of space and he has conducted a lot of interesting research highlighting the connections between Scotland and Trinidad. The first place we visited was the Lapeyrouse Cemetery, just down the road from me in Woodbrook. The cemetery was used as the municipal dump during colonial times, and Josh has built up a sound knowledge of the various curios to be found there, from cast iron railings and crypt doors from long lost Glasgow foundries, to willow pattern crockery, just like my Granny’s, now reduced to fragments in the overturned earth. I found a piece of salt glazed ceramic bottle from the H. Kennedy Barrowfield Pottery in Glasgow, a common find in colonial middens all over the island. The cemetery is divided up into various sections, with residents of catholic, presbyterian and anglican faiths. The gravestones and crypts are left to crumble and fade in the intense caribbean heat, and are frequently raided for scrap metal, garden ornaments and building materials. Many of the old crypts also house living occupants alongside the deceased, homeless folks who have used the available shelter to hide away from the harsh sun. Among the epitaphs are precious belongings, clothes drying in the sun and scattered razor blades. 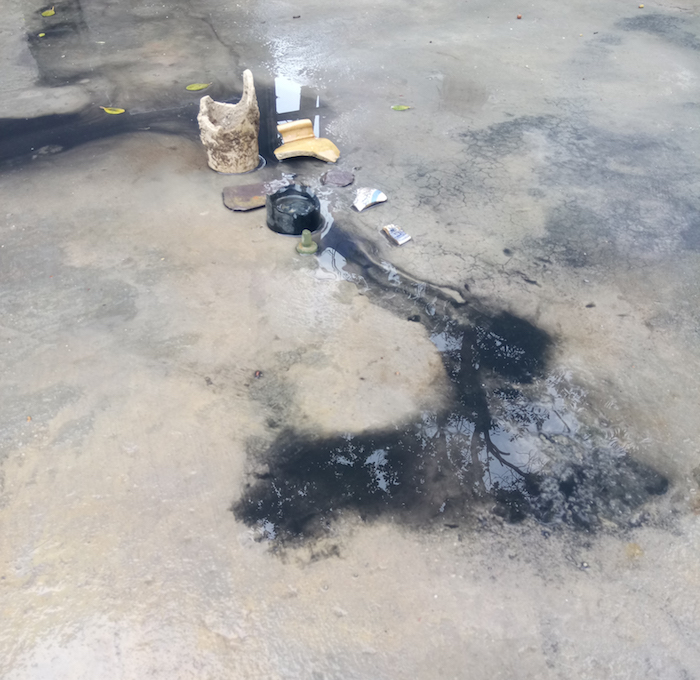 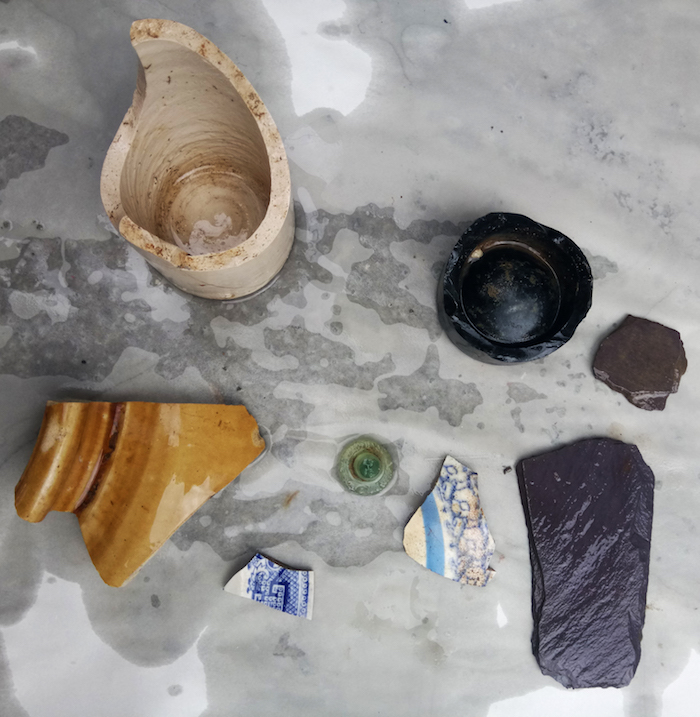 One of the first questions I get asked by people is ‘why weren’t you here for carnival?’ with a combination of pity and disbelief. Carnival is the must see event of the year here in Trinidad and Tobago and I missed it by a week. Most people were in a state of post-carnival exhaustion when I first arrived as a result of days and nights spent partying like the world was ending. There are a lot of different carnival traditions that I’ve not quite got my head around yet, but it’s interesting to try to guess what happened from the collective hangover everyone is experiencing. I spent one afternoon walking to the Savannah, where the main event for carnival takes place, collecting beads and trinkets left over from the elaborate carnival costumes. 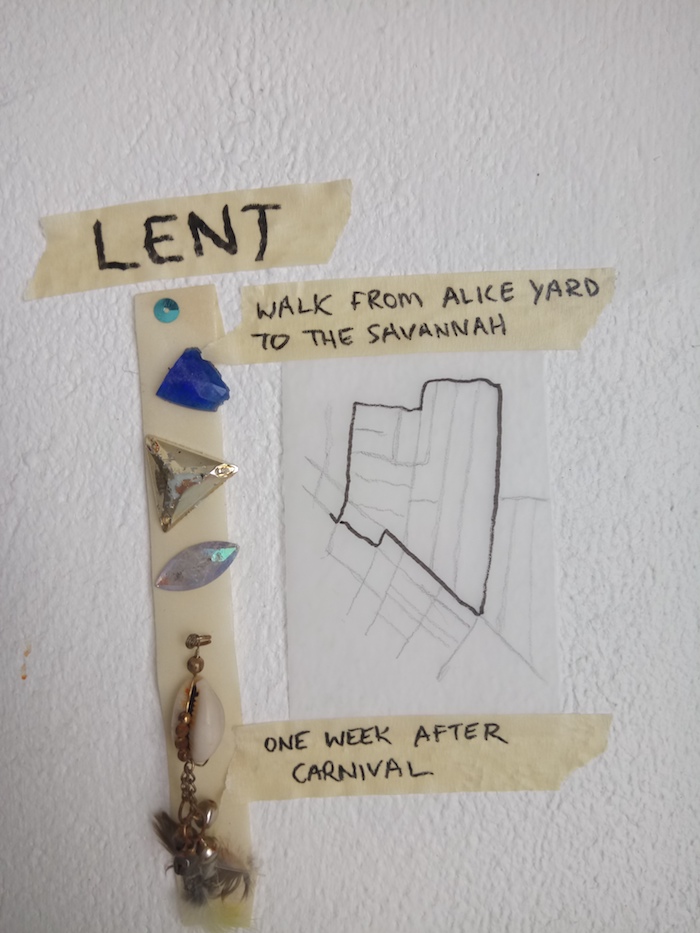 One carnival tradition that I have managed to get involved in through Alice Yard is stilt walking. There is a traditional character in carnival called the Moko Jumbie – a masked mischief maker on high stilts that was once a mainstay in carnival and is now starting to make a comeback thanks to the innovations of local artists and groups. Local practitioners Josh Lu and Kriston Chen are collaborating to hold regular Moko sessions beyond carnival season, teaching the act of stilt walking to beginners from all over T&T. On Sunday we spent the afternoon in the yard of a traditional timber frame house which has recently been renovated. Aspiring Mokos from all over Port of Spain and beyond came along to learn both stilt walking and the history of the house facilitated by a carefully curated intervention by Josh.

Over the past week as my sense of place has altered, and I find myself less uncomfortable with my outsider status, I am drawn again to one of my favourite poems by the Scottish writer Norman MacCaig. MacCaig wrote of his experiences exploring the wild coastlines of western Scotland, but I think this poem travels with some resonance to Trinidad, and the wild urban landscape of Port of Spain.

I watch the lush moon fatly smirking down –
Where she might go, to skirt that smouldering cloud,
Is space enough to lose your image in.

Or, turn my head, between those islands run
Sandpapering currents that would scrub the dull
Picture away in suds and slaverings.

Even this grass, glowered at with force enough,
And listened to with lusting, would usurp,
In its beanstalk way, this walking, talking thing.

I choose it should not go. I turn for these
Paltering beautiful things, in case I see
Your image fade and myself fade with it –

A dissipation into actual light:
A dissolution in pure wave: a demise
In growth of green goodness, sappy and thick –

And think myself a foreigner in this scene,
The odd shape cramped on stone, the unbeastlike, clear
Of law and logos, with choices to commit…

Thump goes the wave then crisscross gabbles back –
As I do now till, wave to wander at,
I come again, to tower and lurch and spill.