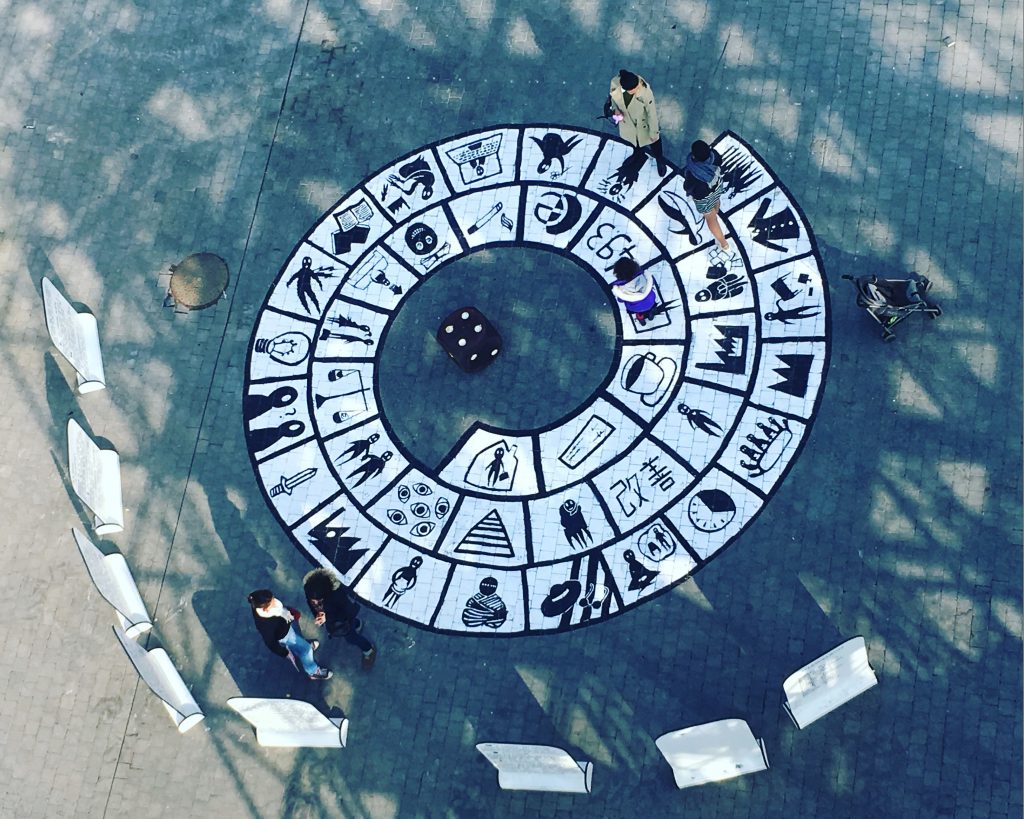 A feature by Claire Dufour.

This year the Biennale Internationale Design Saint-Étienne is celebrating its tenth edition. Representing UNESCO City of Design Dundee, I had the chance to soak up the Biennale and build bridges as part of the UNESCO Creative Cities network.

Saint-Étienne received the Unesco City of Design designation in 2010. The theme for this years Biennale, ‘Working Promesse. Shifting work paradigms’, was explored through numerous exhibitions and events which are held in the city’s former Royal Arms Manufacturing site (Site Manufacture) for a full month from 9th March to 9th April 2017. In a stark contrast from its dramatic history, the huge space is now home to the powerhouse that is Saint-Étienne Higher School of Art and Design and the ‘Cité du Design’.

The programme also included several days of discussions with over 70 delegates from Detroit – the guests of honour for this Biennale and the latest arrival to the UNESCO City of Design network, joining in 2015.

What the cities of Dundee, Saint-Étienne, and Detroit have in common is a strong heritage of an industrial manufacturing boom followed by economic decline. As UNESCO City of Design, each city share the same aspiration to re-imagine themselves through the practise of design and use the cityscape as a laboratory. The main challenge is then, how to leverage what’s already there and involve everyone – the designers and residents – in the process?

The discussions I took part in were around the question, “how can design help us re-shape and activate the city into an inclusive, sustainable and resilient place to live and work?”

Design as a style, process or strategy is a human-centred approach which – beyond being used to identify and solve a variety of problems – helps us experiment social innovation, economic development and discover new ways of life. During these discussions, we talked about design as an ongoing process, not to reach an ultimate goal but to perpetuate the continual improvement of things. Design also extends the definition of ‘inclusiveness’ as more than “be a part of” but “take part in”.

Dundee UNESCO City of Design Values agreement shows the city’s commitment to using design to improve people’s lives. Companies, organisations and creative practitioners based in Dundee are invited to show their commitment to the City Values, which include promoting social justice, raising aspirations, and involving communities in collaboratively designing services and solutions. The full City Design Values agreement is available here. 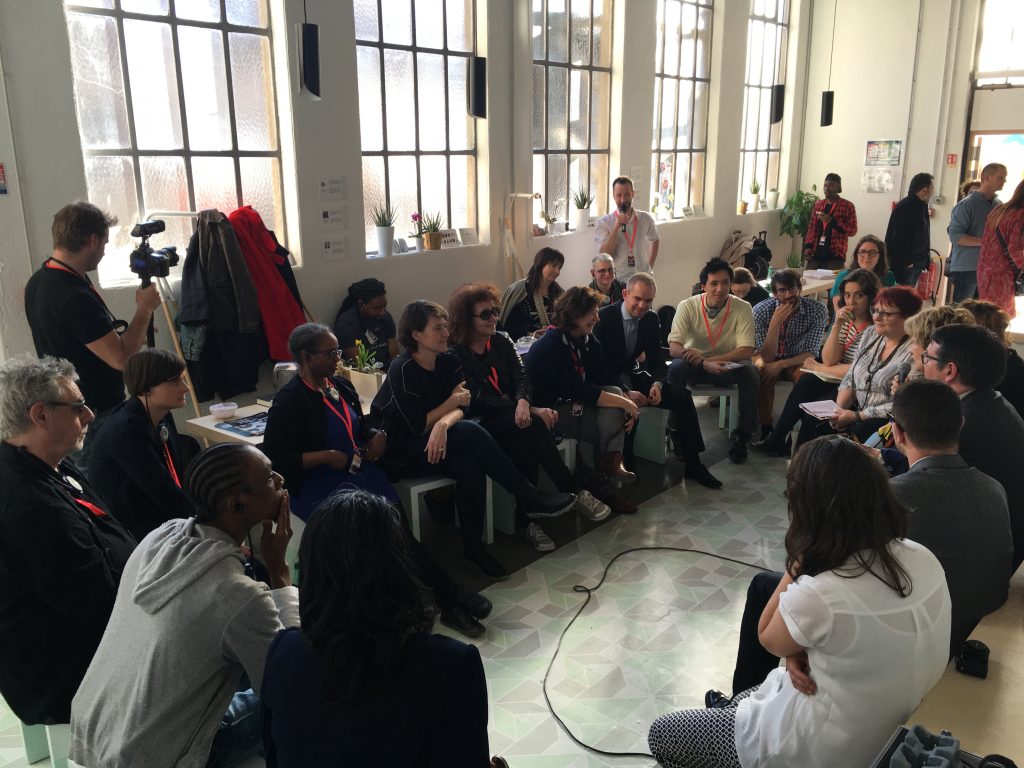 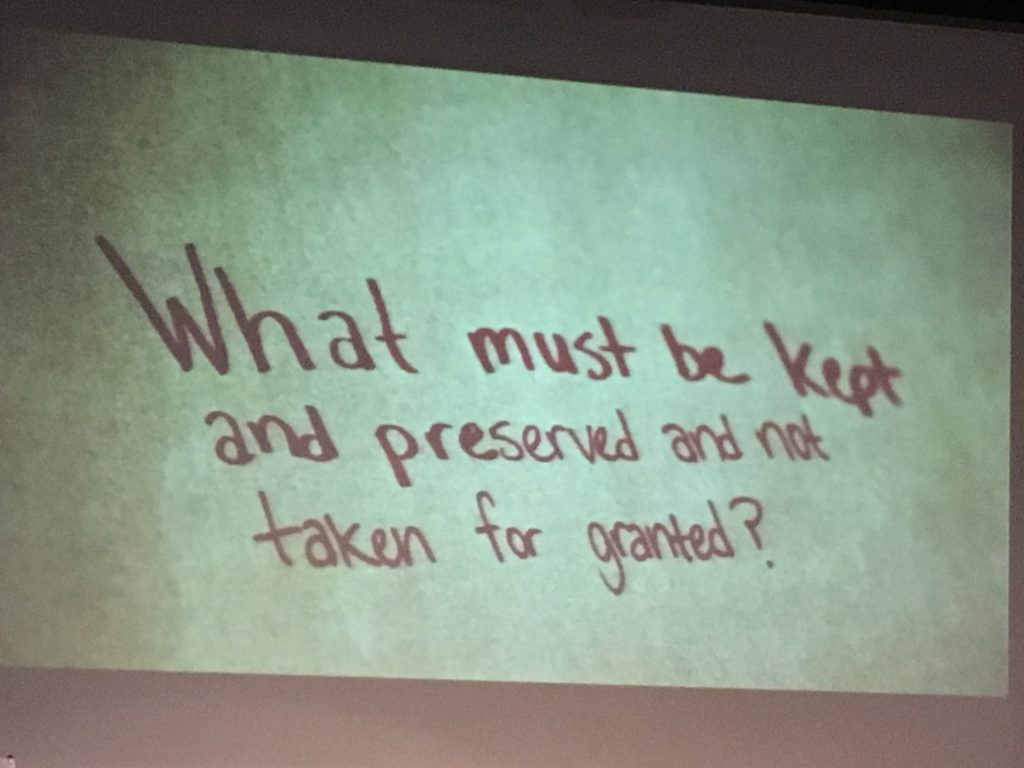 Taking in the multiple exhibitions and contributing to in-depth debates was quite intense, but fortunately the Site Manufacture’s courtyard allowed for a welcome coffee break under the blazing sunshine. This open space features the exhibition ‘Out of Site’, with working installations by Detroit-based design duo Akoaki. The low-profile designers are behind high-visibility design interventions in the Oakland Avenue-North End neighborhood and have breathed unique installations into the world (photos below) such as the Mothership – an Afro-futuristic urban marker and piece of “ancestral technology” that serves as a DJ booth or stage set for performances. 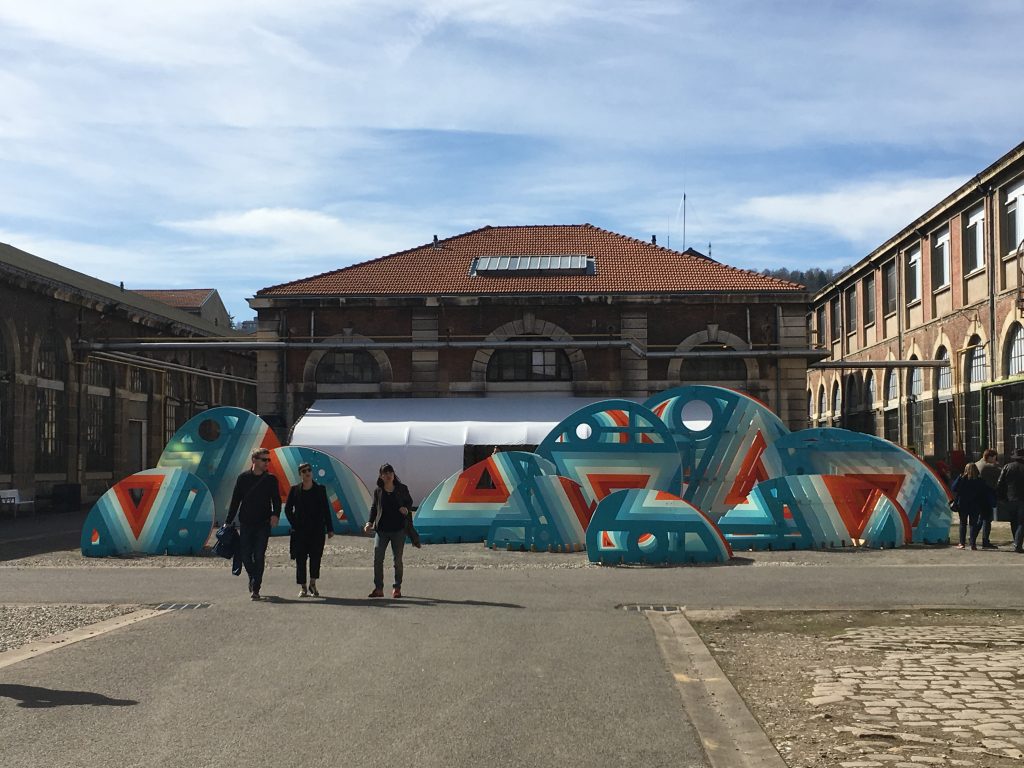 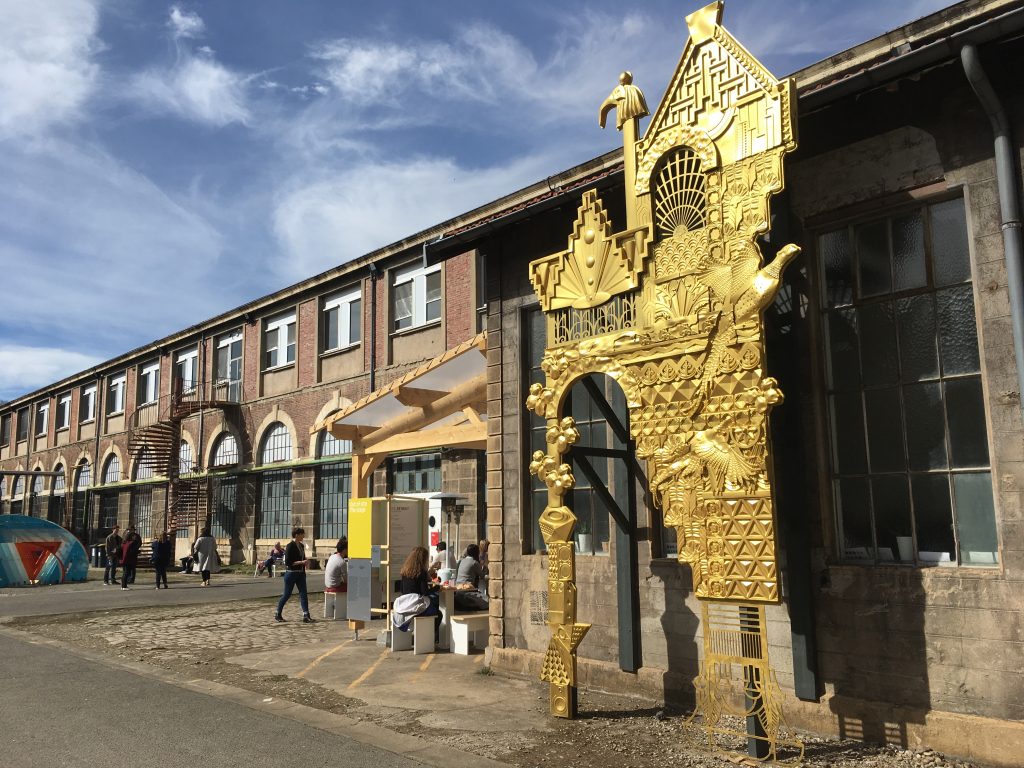 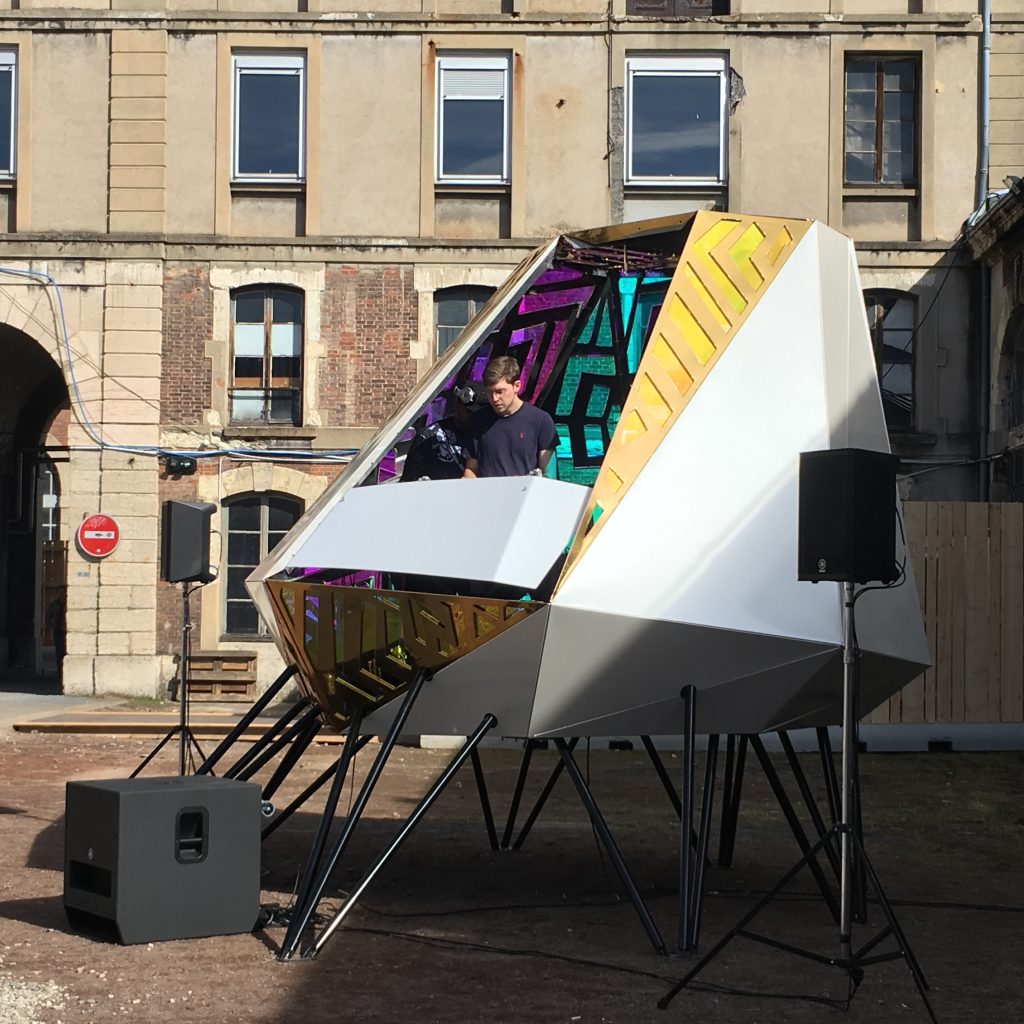 This year’s Saint-Étienne biennale is also partly shaped by a research programme which explored the future of work and how its mutations can help redesign the city. Numerous exhibitions, activities and labs are happening outside the walls of the ‘Site Manufacture’. Our hosts Josyane Franc and Camille Villain took us (the international delegates) on tours around the city to visit a few of them.

New to the Biennale is the experimentation in ‘Rue de la République du design’ which questions the High Street’s occupation and livelihood. For five weeks, elected officials, real estate agents, landlords, citizens, entrepreneurs, designers, artists and urbanists are debating on the future and the many possibilities to live and work in the city. Fifteen vacant shops have been reinvested by more than 40 project leaders who bring the street back to life for this period with the hopes of seeing  some of these initiatives continue after the Biennale. It’s also a great way to invite the citizens in playing an active role in reshaping the high street. 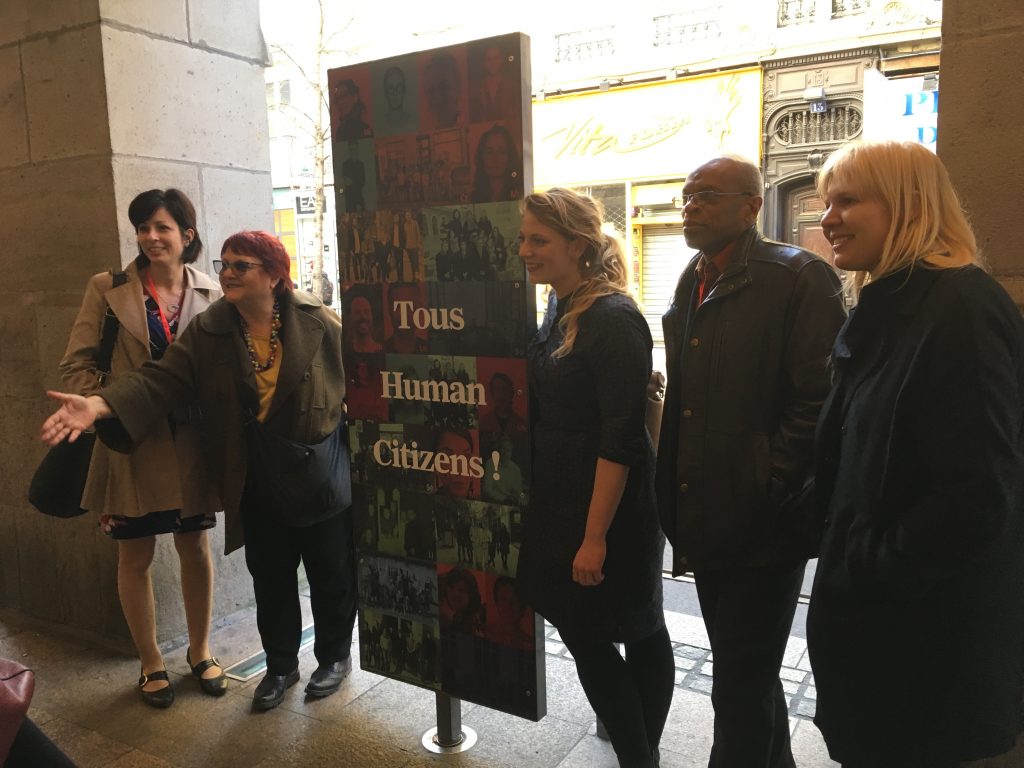 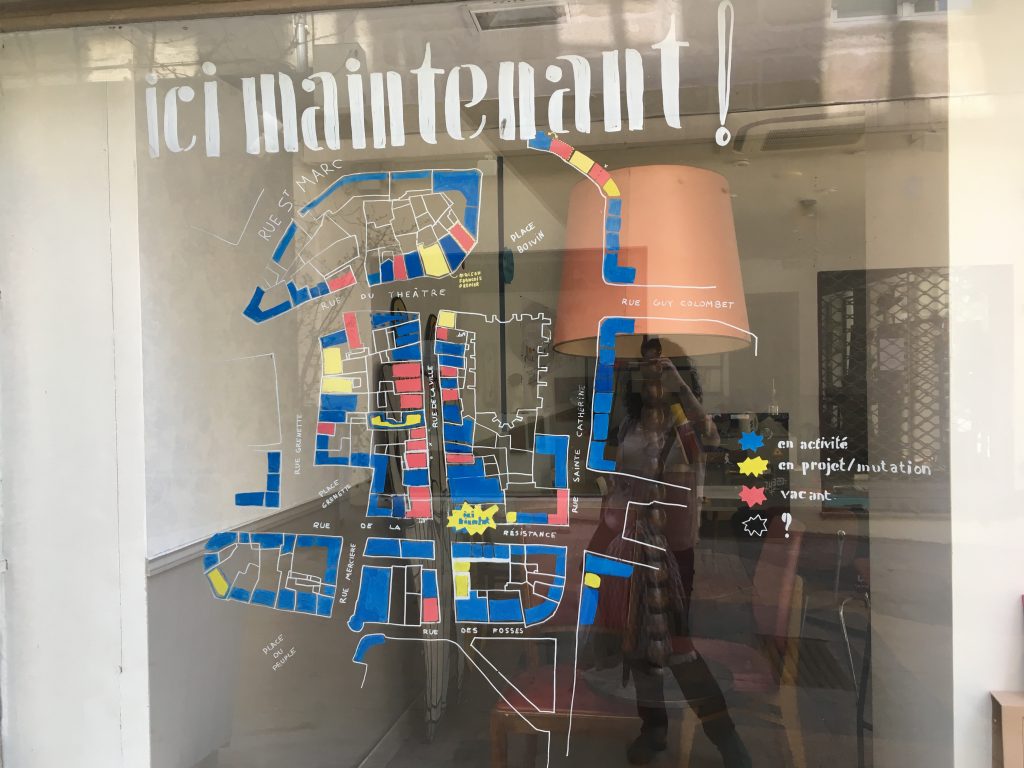 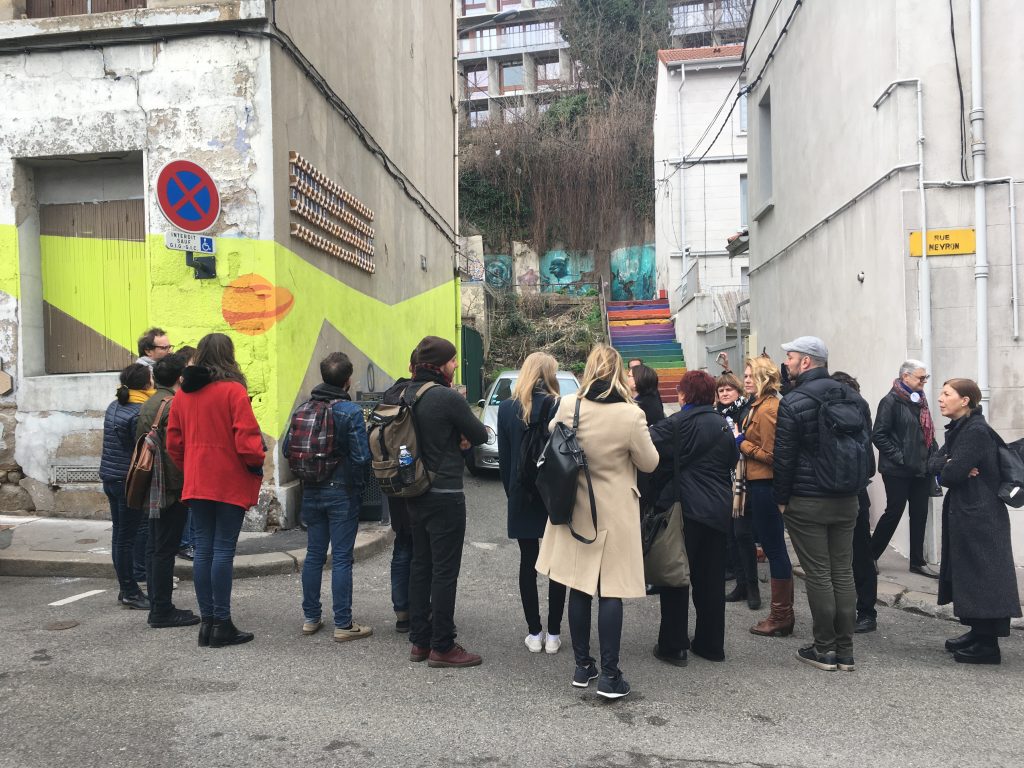 Another example of experimentation during the Biennale is a project led by a pluridisciplinary group called Hypermatière. As part of European Union funded project Human Cities, this group of designers, architects, artists, and local communities together took over a private piece of land to experiment the current and future possible transformations of the deprived district of Cret de Roch.

Human Cities_Challenging the City Scale is a project co-funded from 2014-2018 by the Creative Europe Programme of the European Union. It is a platform of interdisciplinary exchanges of 12 partners led by Cité du Design from Saint-Etienne. This European network is about exploring the way in which the inhabitants reclaim the constantly evolving contemporary city (especially through experiments in the urban space) and ways of (re)inventing city life, as sources of wellbeing and quality of life. These structural changes are impacting both people and places like shops, public squares, parks, or streets in town and city centres.

We had the opportunity to spend a morning with the collective on site and discuss their process. The collective is using design as a tool to engage with the neighbours and uplift local creativity, and even though they have disposable resources (cash from the European Union) to make the project happen, they still have to face many challenges.

For this bottom-up collective urban experience, the main challenge was to anticipate the necessary time to build-in relationships and understanding with all the actors of the project – like many of us, they are now working beyond the cash injection because of their civic engagement in this project. They confessed to us that the enthusiastic participation of the inhabitants from all ages is playing an important part in their motivations to continue.

This project – as with many others from the Human Cities programme – is a great example of social innovation initiatives which show new examples of acting together. These kinds of projects also demonstrate a demand for alternative third places, such as Fablabs or Makerspaces, which allow for engagement, solidarity, peer-learning, new governance, shared heritage and emancipation from the industrial models of working which now look obsolete. 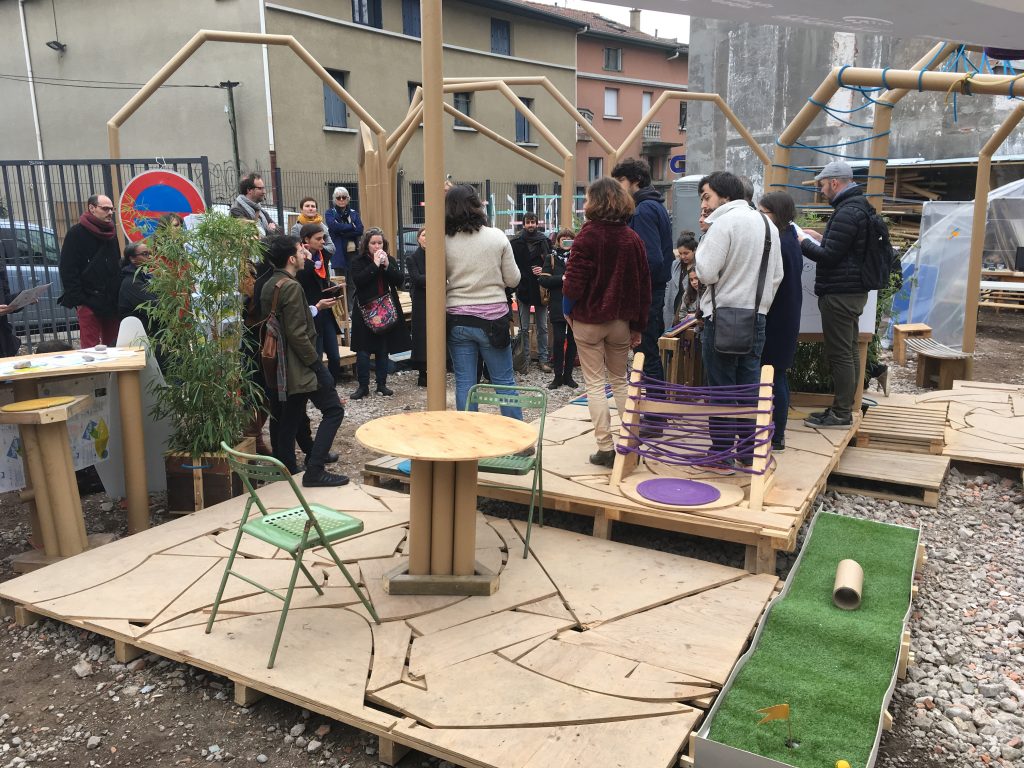 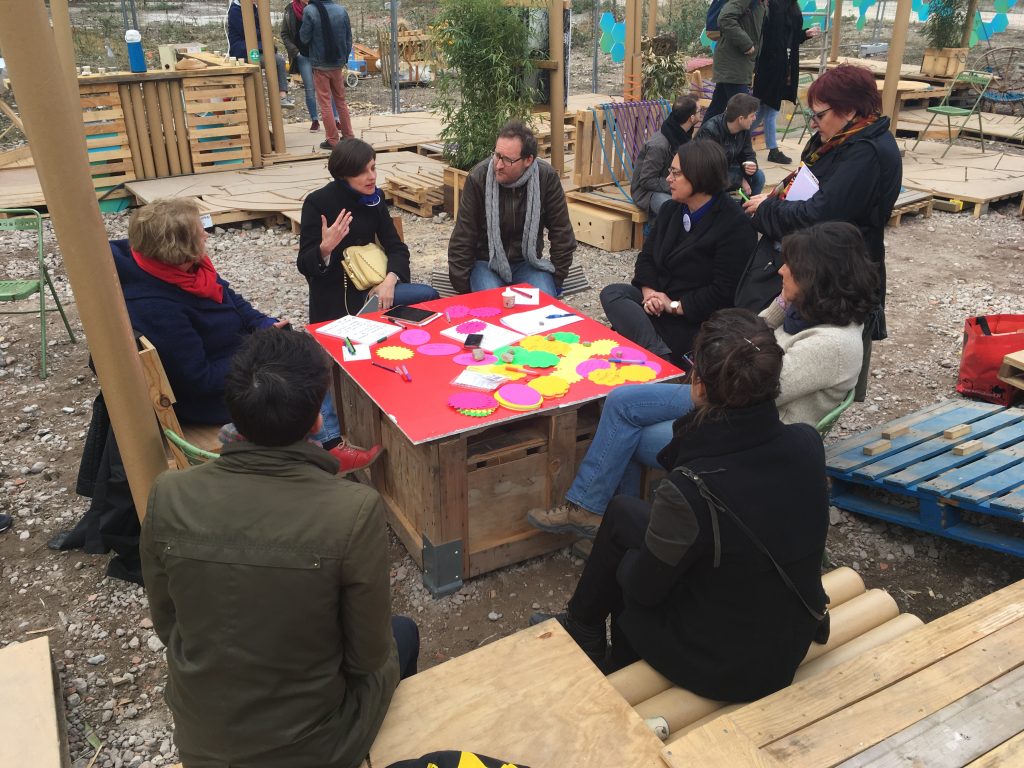