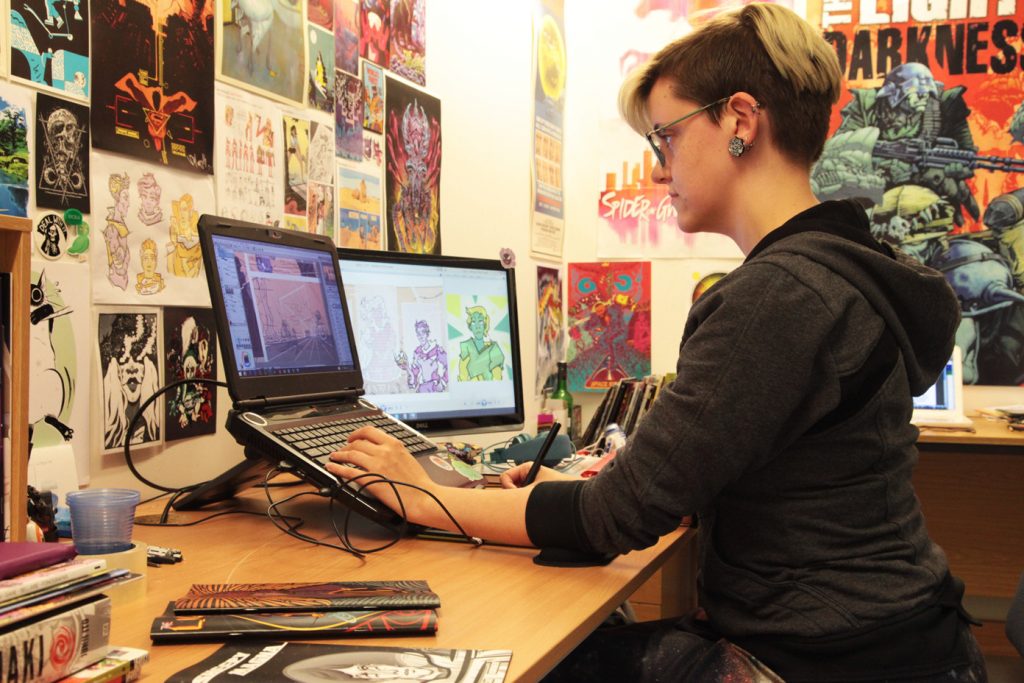 Spotlight is a monthly feature, highlighting the work of an artists, designers and makers in Dundee. This month we catch up with Rebecca Horner, a freelance comics artist in Dundee. She is one of the members of Ink Pot and delivers workshops on comics through Dundee Comics Creative Space.

Sam Gonçalves: You’re at the end of your Masters course in comics, so here’s that old and unfair question; what’s next?

Rebecca Horner: I want to stay here, as long as this space (DCCS & Ink Pot) exists I want to be a part of it. I love doing the workshops with the kids – I think it’s important to encourage kids to be creative, especially if it’s something they might consider pursuing as a career later on. We’ve been able to run workshops in the local community, such as at the Design Festival, Festival of Museums, and in schools and community centres, and this is something I’d like to pursue further. I’ve had a lot of opportunities come out of being in the space, so I’m trying to make the most of it!

S: It seems to me that the culture emerging around this space, and comics in Dundee more broadly, is a very encouraging one for artists.

R: Being part of the studio gives me the space to develop my portfolio so I can push it to a professional standard. I’d like to work in the industry as a colourist but also to make the things I want to make and I feel like this gives me the capacity to do that.

S: I didn’t realise it was one person’s job to do just the colouring in comics!

R: It kind of depends on the publisher. DC and Marvel will have a penciller, an inker, a colourist, a letterer, the editor and the person who actually writes it. But then, for Image Comics, someone will do both the writing and drawing. But I find I really like being given someone else’s inks to work with, because it’s a kind of a problem-solving of how can I make this look as good as it could possibly be. That’s the bit I find the most exciting! 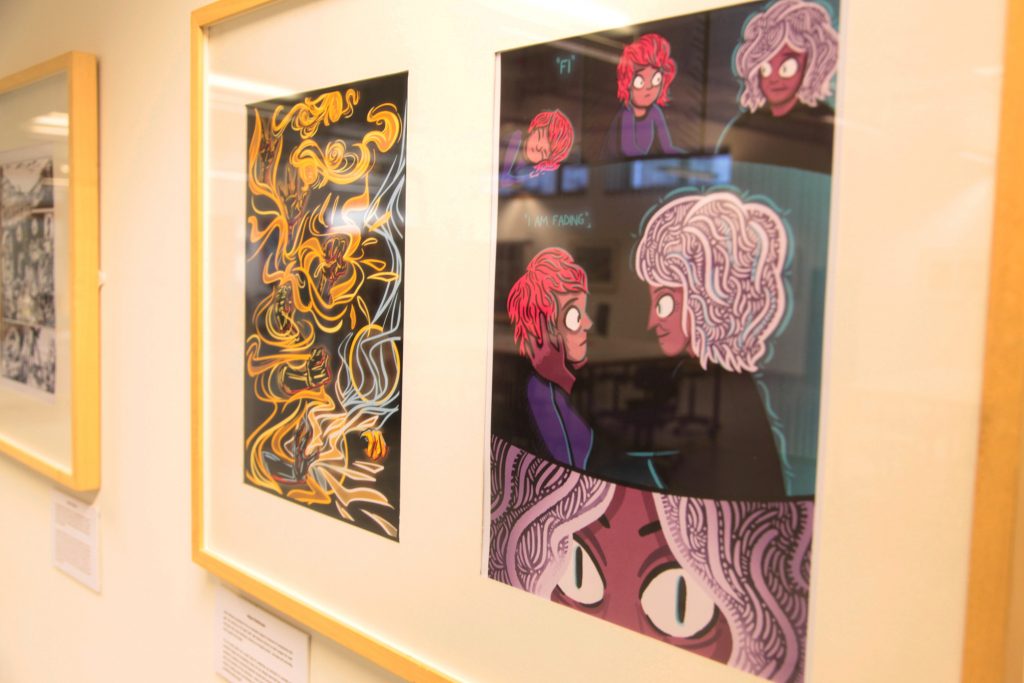 S: Do you collaborate often?

R: Yeah, I really like working with other people and I’ve been lucky to work with some amazing people. I often work with one of my best friends and she’s currently developing something that she asked me to cover and I can’t wait to get her pages because it is such a pleasure to do stuff for her.

S: I guess collaborating often, or just working alongside other people, gives you a kind of creative support network.

R: Having other people who are on the same boat is very comforting.

S: What’s your advice for people starting in comics right now in Dundee?

R: Take every opportunity and always take something positive from what you are working on. Sometimes a freelance job will be very strict and you won’t have the opportunity to be too creative outside those boundaries, but there’s always something you can get from that experience. And Dundee is a good place to be right now, you can very easily just go to events and get involved in different things. That’s how I got involved with Treehouse Comics in the first place, just turned up to one of their events and everyone was really nice!

S: For anyone reading this who wants to start reading comics a bit more, local ones or just comics in general, where should they start?

The first three are local creators, and the last two are just a couple of my all-time favourites. 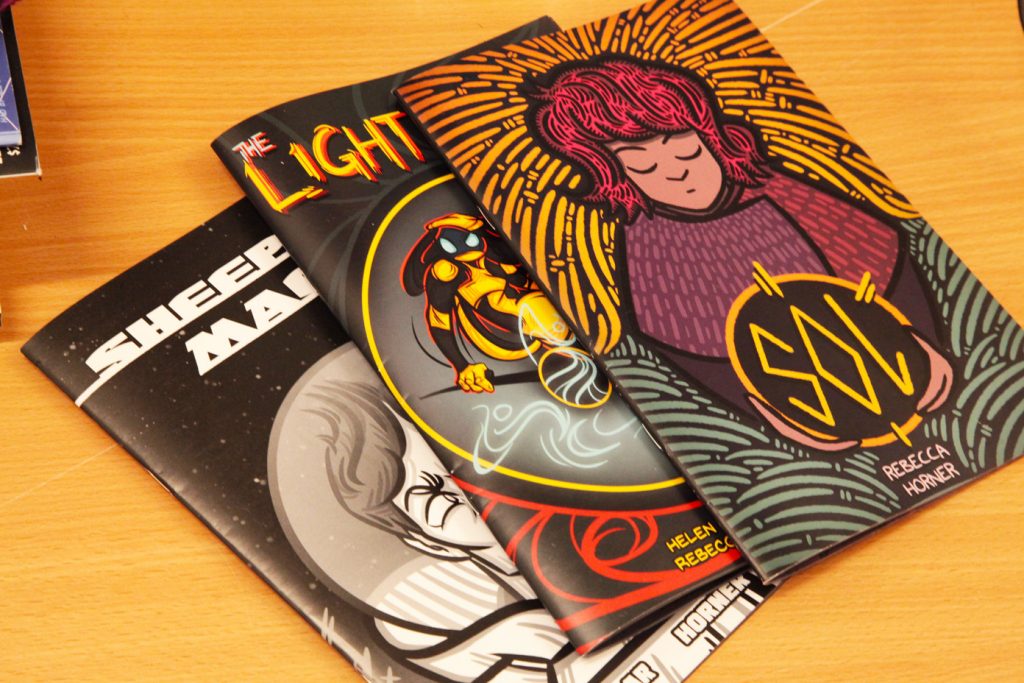 S: We’ve started asking every Spotlight interviewee to give us a question for the next interview (even though they don’t know who is next), so here’s a question from Laura Collins: What is a creative thing in your life you couldn’t live without – that’s not related to your work?

R: Oh… That’s an interesting question… I really like to arrange posters on my wall! I can spend hours just arranging them into the perfect composition. And then a few months later I look at them and think “oh this doesn’t make any sense” and then do it all over again. I’m quite anxious in general so I find it helpful to have a moment of doing something I’m in control of and taking time to process things. I just need a big wall to be able to decorate and make nice!

S: See, I’m into that but I still haven’t found blu tack that doesn’t stain the wall!

R: Oh me neither, my walls are an absolute state right now. I’m going to have to repaint by the time I move.

S: Yeah, me too… I hope my landlord doesn’t read this… Ok, before we finish, what is your question for the next guest on the Spotlight feature?

R: Hmm… If life had a one song soundtrack, what song would you choose?

S: Amazing! Thanks for your time Rebecca! 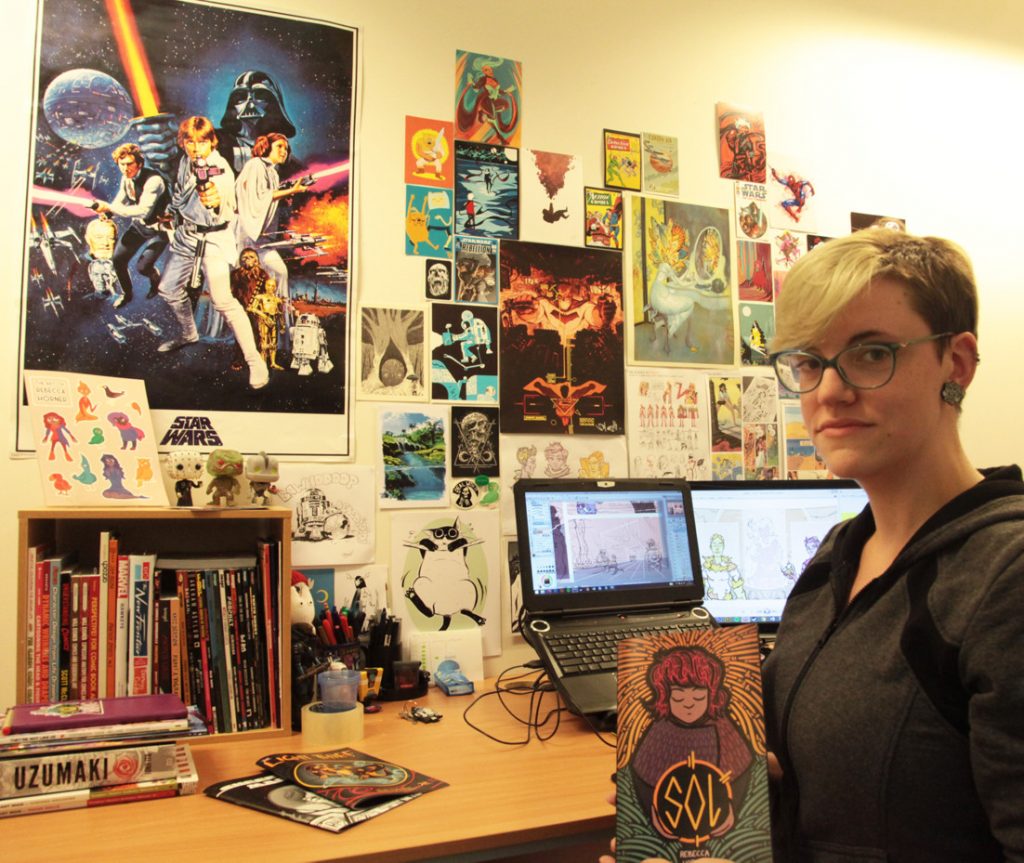