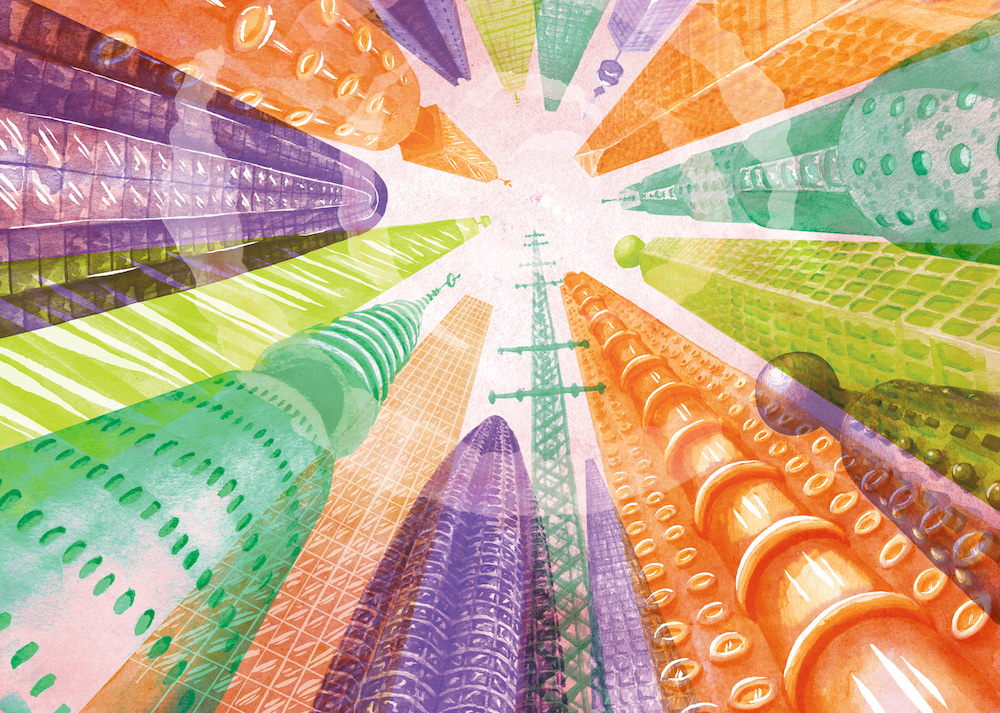 Please note: This event is now fully booked, please join us on the live stream at 7pm on our Facebook page.

Author Ursula K. Le Guin, once wrote: ‘The imagination is an essential tool of the mind, a fundamental way of thinking, an indispensable means of becoming and remaining human’. She saw the process of ‘imagining’ as something that couldn’t be done alone, later adding: ‘Listening is an act of community, which takes space, time, and silence’.

Dundee is a city in transition. It’s almost half way through its current 30 year waterfront transformation, which has seen dramatic alterations to the city’s physical surroundings; and significant global changes have influenced the ways we live, work and play over the last decades. As Dundee bids to become European Capital of Culture in 2023 we felt it would be a good idea to collectively imagine what the next thirty years on from this title should hold for the city and its residents.

Join us at this evening event on Thursday 28th September 2017, from 7-9.30pm, to hear inspiring ideas from a range of speakers across the city and beyond, who will share their short stories and provocations from Dundee’s future. On the night you’ll be able to share your thoughts about the future of the city in our video booth.

Topics we’ll be exploring include considering the future of: culture / living / working / money / love / health / environment / play / communication and more. Tickets are free but must be booked in advance.

COMMUNICATION: Sam Gonçalves is the Digital Producer at Creative Dundee where, amongst other things, he has produced the weekly original content that has been released in the last few months. Outside of this role he makes documentaries via film, writing and podcasts. His previous work has been selected for the LUX Scotland archive and received an award by Fife Decorative Arts. The kinds of stories he has worked on have touched on the history and urban development of Dundee, creativity, sailors, mice, Aretha Franklin and Brazil – his home country. @SidlingBears

ENVIRONMENT: Mel Woods is a Reader in Creative Intelligence at University of Dundee. Her research focuses on supporting people using technology to make sense of data for creativity, action and change-making. She is a lead investigator for projects AHRC Design in Action, H2020 Making Sense and H2020 The GROW Observatory. @i_serena

LIVING: Hot Chocolate Trust has been engaging, building relationships, and growing community with young people in Dundee for over fifteen years. They use creative approaches to support young people on their own terms, and affect wider change. Hot Chocolate has been described as “strangely educational”, and “one big happy dysfunctional family”. @HotChocoTrust

HEALTH: Christina Neuwirth was born in Austria and now lives in Edinburgh. She has written, produced and directed short films, performed at the Scottish International Storytelling Festival, and dabbled in music production. Her short fiction has been published in Gutter and 404 Ink, and her non-fiction can be found on CommonSpace, The Dangerous Women Project, and most recently in Nasty Women and Marbles Mag. Christina’s novella Amphibian was shortlisted for the 2016 Novella Award. She is currently working on her first novel and pursuing a PhD at the University of Stirling, researching gender equality in writing and publishing in Scotland. @gwynn255

MONEY: Andrew Staines first came to Dundee 20 years ago from a small village in Norfolk, to study Genetics at Abertay Dundee and then stayed, with a wee sideways move to Perth 10 years ago. Since University he’s been incredibly lucky to work as a futurist (he still can’t believe this sometimes) for a range of organisations including the Scottish Environment Protection Agency, Scottish Enterprise and in 2013 became the UK Cabinet’s first ever dedicated futurist. Andrew has worked as a jobbing futurist on diverse topics such as demographics, trade, law, climate change and money and has advised amongst others the EU, OECD and various world governments on futures practice and emerging areas of interest. Andrew firmly believes that people, their behaviours and society make the future, not the latest technology trend.

CULTURE: Kathryn Briggs: Originally from the suburbs of Philadelphia, in 2012 Kathryn moved to Scotland to pursue her Masters, and loved it too much to leave. She is an award-winning graphic novelist, combining her classical fine art training with a love of pop culture to create comics which range from slice of life to comparative mythology. She is also an arts educator, teaching in museums, contemporary arts centres, higher education and facilitating workshops for charities.  Her comics work can be found in Treehouse Comic, Dirty Rotten Comics, Sliced Quarterly, TYCI, Meanwhile…, The Drouth, and released through her own small press, Ess Publications. @withryn

WORK: Bryan Beattie is currently Director of the Dundee 2023 European Capital of Culture bid and had been involved in the developmental stages of several cultural projects in the city, including the V&A, UNESCO City of Design Bid, West Ward Works, and the last two cultural strategies for the city. He is the founder/director of the Creative Services consultancy and Big Sky production company. His CV displays a distinct lack of career focus, but has included some good job titles. @Drumderfit

PLAY: Lynn Parker came to Dundee from the West coast of Scotland in 2000 as a student and is happily, still here.  She now finds herself as an animation and interactive art lecturer at Abertay University and a practicing artist, who produces ‘play interventions’ that aim to bring people together through interactivity, social experiences and playful spaces.  She likes to make strange things that are social and playful, whether they be games, events or objects and this is the focus of her PhD which she is undertaking as part of Abertay Game Lab.   Most recently she has collaborated on projects including a three-player social play game where players’ don a poncho and hold hands to play a digital game with their bodies, a set of sensing cuffs which can be used by players to imbue inanimate objects with narrative potential and a digital dance system which uses abstraction and sound to encourage players to experiment with different kinds of movement. Lynn is passionate about play and believes we all could benefit from being a little more playful in our everyday lives.  She is also a little obsessed with using projectors in her work.  @toadrick

LOVE: Siôn Parkinson is an artist and singer. Using multiple voices, he combines choral and a cappella singing with field recordings to create exaggerated characters and environments, often exploring themes of love, loss and bodily intimacy. His recent work, Blind Love Bad Taste (2017), was a series of love songs exploring the complex relationship between an ancient, blind and stinking shark and the two worms that feed from her eyes. As an independent producer, Siôn works with artists and institutions to make experimental music, visual art and contemporary design events in some of the most extraordinary and unusual locations across Scotland. He is currently working with The McManus: Dundee’s Art Galleries and Museum on two important new commissions by artist Duncan Marquiss and musician Jonnie Common to celebrate the museum’s 150th anniversary (Nov 2017). Since 2016, he is the Producer of Dundee Design Festival. @sionparkinson

This event is brought to you by Creative Dundee, in partnership with Dundee 2023 and DC Thomson.

Thanks to Jennifer Clarke for the brilliant future city illustration, find more of Jennifer’s work here.

Tickets: Free but must be booked in advance here or below.