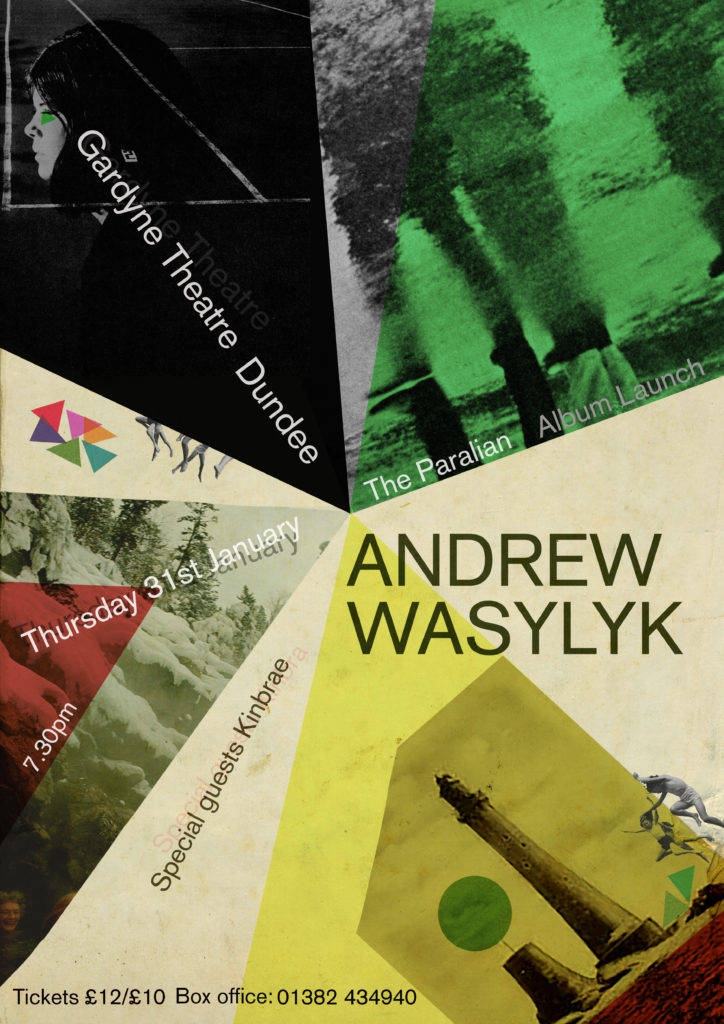 Following on from the success of his critically acclaimed sophomore album, ‘Themes for Buildings and Spaces’, Andrew Wasylyk returns to the Gardyne Theatre, with a nine piece band, to launch his third and most creative album to date, ‘The Paralian’, released 1st February 2019 on vinyl, CD and digital through Edinburgh record label Athens of the North.

Earlier this year, Andrew was commissioned by arts centre and historic house Hospitalfield in Arbroath, Scotland to create music for their restored 19th century Erard Grecian harp. Over the next five months, he created melodies and progressions echoing the building’s unique relationship with the looming North Sea horizon. Using not only the harp, but the house’s original grand piano, Andrew explored the Angus landscape and beyond, gathering field recordings on trips to neighbouring Seaton Cliffs and Bell Rock Lighthouse – the world’s oldest surviving sea-washed lighthouse.

Talking about the new album, Andrew says: “Initially I was intent on a minimal approach with the Grecian harp. However, with each visit to Hospitalfield I became engrossed with the North Sea horizon, realising that, despite living on the east coast of Scotland, I’d never truly felt its full presence.

“At that point, the writing and arrangements evolved – shimmering strings, wandering melodies on a Fender Rhodes, the submerged pulse from a tape loop – a variety of elements drifted into the work. Revisiting these tracks, there’s a farewell transmission gently blowing through them.”

‘The Paralian’ is available to pre-order now: https://goo.gl/mDdSsz

As well as the new album, Andrew has announced a run of Scottish dates in early 2019, including a hometown show in Dundee on Thursday 31st January at the Gardyne Theatre:

Support for the show at Gardyne Theatre comes from Kinbrae, the project of twin brothers Andy and Mike Truscott who combine ‘musique concrete’ with brass and electronics to form a unique and accessible strain of ambient and classical music.

You can grab tickets for the show at Gardyne Theatre here – https://bit.ly/2ORY89T