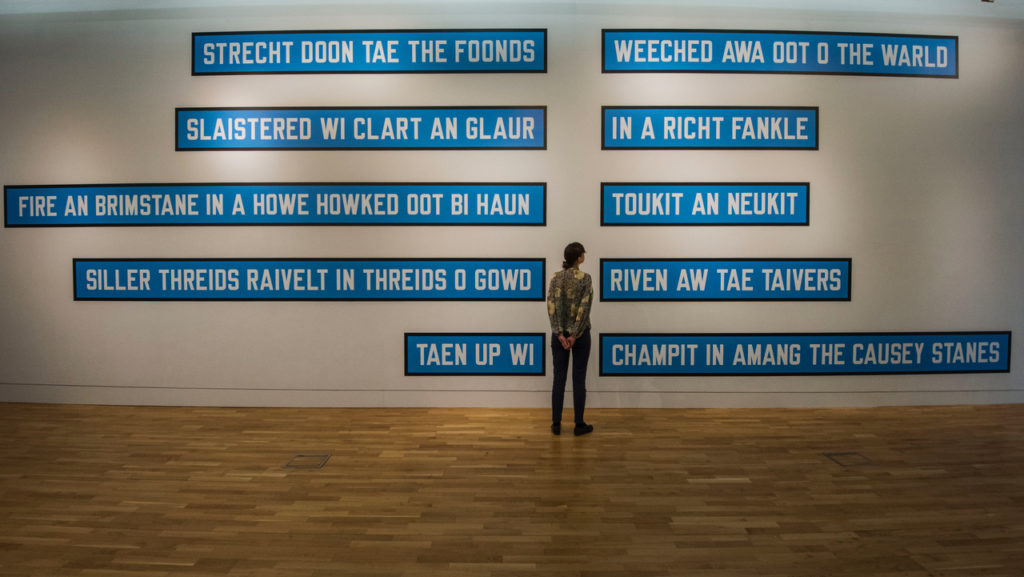 Contemporary art with a Scottish twist is on show at The McManus until next February. Can text really be art? Influential American artist, Lawrence Weiner adopted language as his medium early on in his career, and text remains at the heart of his practice. Best known for his arresting wall installations, Weiner’s text pieces can take many forms, but the core principle remains the same – his ideas should not be confined to the gallery but taken up by the viewer.

This exhibition draws from ARTIST ROOMS, a touring collection of over 1,600 works of modern and contemporary art by more than 40 major artists. The collection is displayed across the UK through a touring programme, supported by Arts Council England, Art Fund and Creative Scotland.

Unique to Dundee, Weiner’s wall texts are presented in English and Scots, translated by distinguished author James Robertson. Although the artist has exhibited internationally in a number of languages, this is the first time his work has appeared in Scots. In addition, a rare mini-retrospective including a selection of works on paper, archive and ephemera offer a comprehensive overview of the last five decades of the artist’s prolific career, featuring material on loan from the Tate and the Artists’ Books Collection Dundee (abcD) at the University of Dundee.

The McManus is proud to work together with the Weiner Studio to create gallery interventions as part of the project. The cycle of ten wall texts from the ARTIST ROOMS collection have been carefully placed within their permanent displays. These evocative statements will amplify Dundee’s rich collections of natural history, archaeology, world cultures, industrial machinery and the spectacular Gothic architecture of the building itself.

Lawrence Weiner said of the collaboration and exhibition:

“SCULPTURE IS ABOUT MARKING SIGNPOSTS WITH MATERIALS THAT ALREADY EXIST

WHERE PEOPLE WHO HAVE LOST MOORING TO THE STRUCTURE HAVE ENDED UP WRITING HOMILIES WITHIN THE WALLS OF INTERIOR SPACES.

WHAT WE HAVE WITH SILLER THREIDS RAIVELT IN THREIDS O GOWD IS NOT A HOMILY BUT IN FACT A FACT.”

The exhibition is open now until February 2019 at The McManus.