Bell Street and Beyond Powered by Pecha Kucha 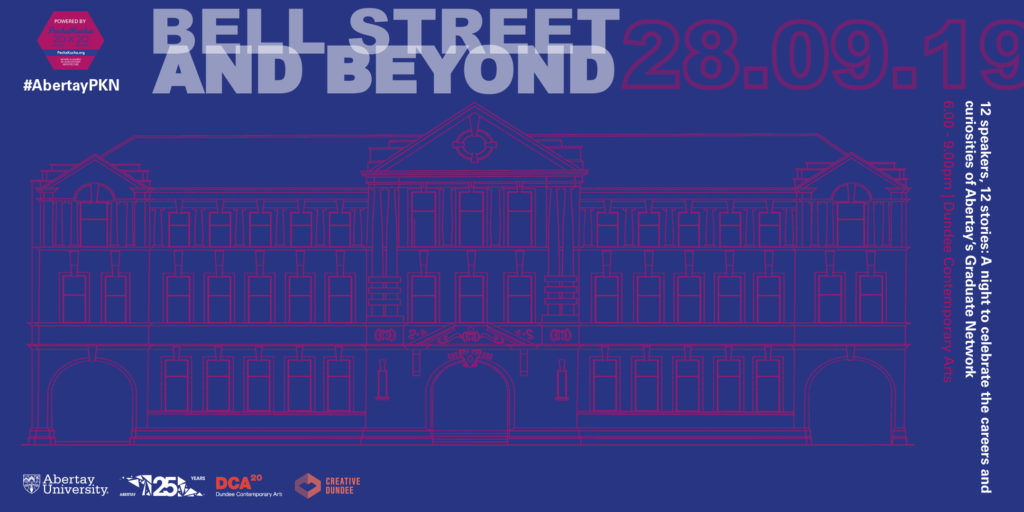 10 speakers, 10 stories: A night to celebrate the careers and curiosities of Abertay’s Graduate Network

In collaboration with Creative Dundee, Abertay University’s 25th anniversary celebrations are set to continue as a handful of its Graduate Network gear up to talk all things ‘Bell Street and Beyond’…Pecha Kucha* style on 28 September, 6 – 9 pm at Dundee Contemporary Arts.

With a nod to their Bell Street campus connections, 12 graduates from Abertay University, Dundee Institute of Technology, and Dundee College of Technology will share stories about their diverse career journeys through this fun and informal format, imparting collective wisdom from professional and personal experiences over the years.

From football management and professional travel blogging to games development and social entrepreneurship, this event is perfect for regular PechaKucha-goers and those who’d love to learn a little about a lot.

Following the quick-fire talks, the party will continue with complimentary drinks and nibbles in DCA’s foyer. There will also be the opportunity to view a selection of Abertay’s 25 Year Archive Exhibition.

Join us for this one-off event and prepare to be inspired by Abertay’s Graduate Network.

Cian Roche, Managing Director of Puny AstronautCian Roche is the Managing Director of Puny Astronaut, a cheery game developer based in Dundee. He founded Puny Astronaut with a group of fellow Abertay students after winning Dare to be Digital 2016. They are currently working on their debut game, Skye, which offers players the chance to visit a world that couldn’t be happier to see them. Last year they received investment from 4J Studios, the developers of Minecraft console edition.Social: @PunyAstronaut, @Cianowski

Colin is a podcaster, speaker, PhD and founder of both The Podcast Host and Alitu: The Podcast Maker. ThePodcastHost.com is a huge audio, video and written resource on creating a successful show. Alitu.com is a web app that helps anyone to make a podcast really easily, by polishing, branding & publishing your show.

David Webster joined Forth Ports Limited as the Port Manager in the Port of Dundee on the 27 th of April 2015. The role of Port Manager brings with it full commercial and operational responsibility for the ports, and has a direct reporting line into the Chief Operating Officer.

Prior to joining Forth Ports David worked with Oil & Gas Service Company Weatherford International specialising in Well Construction. His most recent position involved working internationally as a Business Development and Technical Manager for the Sub Saharan Africa region; this was primarily focused on Nigeria and South Africa. Before this David was a Weatherford Product Line Manager for the Central, Western and Eastern Europe region based in Germany.

Debbi graduated from Abertay University with a BSc (Hons) in Sports Development with Coaching. This led to a career in football development and coaching. She started her coaching career at Dundee United Football Club as a community coach, and in 2003 moved to Ross County Football Club where she delivered the biggest community-coaching programme in Scotland. Debbi currently manages the daily business operations at The Academy. A footballer through and through, she has also been Performance Centre Coach for the SFA South East Women’s Performance Centre, developing elite level international players. She holds UEFA A Licence and is currently Head Coach for Spartans Women’s Premier League Team leading them to a SWPL Runners Up position, five SWPL League Cup Finals and the Scottish Cup Final in 2014. She was awarded the SWPL Manager of the Year for Season 2014. Debbi is also a graduate of the Common Purpose Edinburgh Meridian Senior Leadership programme.

Julie has had a long and varied relationship with the ‘Big C’. During her career as a Cancer Research UK research fellow at Dundee University, she was diagnosed with cancer. This up close and personal experience has led her on a journey which has included time as a Buddhist nun and more recently has inspired the creation of CANDU (Dundee Cancer Support Network) SCIO. She and her CANDU colleagues (all cancer survivors and patients) are dedicated to ensuring the voice of those affected by cancer is influential in improving service design and they work to support others affected by cancer in Dundee in any way we can.

Kash, better known as the BudgetTraveller, is the 2016 National Geographic Traveller Blogger of the Year. Author of the brand new ‘The Grand Hostels: Luxury Hostels of the World.’ published by design publisher Gestalten, Kash has revolutionised travel for the stylish, design-led budget-conscious traveller. So whether it’s finding a luxury hostel in Madrid or a budget boutique hotel in Amsterdam, finding the best cicchetti in Venice or what unique cultural experiences you can discover in Berlin on a tight budget, it’s all there in one blog. He’s been featured by the New York Times, The Guardian, Vanity Fair and National Geographic.

Kirsty Thomson is Founder and CEO of The Circle and previously ACK Third Sector Consultants CIC. She is a social entrepreneur with a background in psychology and is fascinated by what makes us all tick. She’s determined to raise awareness of the importance of business for good and a #MoreThanProfit approach by educating others about the benefits of this. She wants to see a world where everyone really is included.

Professor Laura Serrant is one of only 6 black Professors of Nursing (out of 262) in the UK and an honorary graduate of Abertay University. She was also one of the first to qualify as a nurse with a Bachelor of Arts degree. She has frequently found herself as the sole voice representing nurses and minority communities; a position she has striven to challenge throughout her career by empowering others to come forward to join her, in a unique call to ‘lift as you climb’. She is one of the 2017 BBC Expert women, Chair of the Chief Nursing Officer for England’s BME Strategic Advisory group and a 2017 Florence Nightingale Scholar. She is an ambassador of the Mary Seacole Memorial Statue and the Equality Challenge Unit Race Equality Charter for Higher Education. Her work has been recognised with numbers awards and prizes, including Queens Nurse status and Fellowship of the Queens Nursing Institute to those who have shown leadership in community nursing. In 2014, she was named as one of the top 50 leaders in the UK by The Health Services Journal in three separate categories: Inspirational Women in Healthcare, BME Pioneers and Clinical Leader awards. Professor Serrant has an extensive experience in national and international health policy development with particular specialist input on racial and ethnic inequalities and cultural safety. She was awarded an OBE in the Queen’s birthday honours list 2018 for services to Nursing and Health Policy.

Scott Menmuir is a Preventions Police Officer with Police Scotland with a responsibility for children and young people throughout Tayside. Originally from Forfar, he was a student at Dundee Institute of Technology then Abertay University from 1988 to 1993 graduating with an honours degree in Quantity Surveying. Scott has been a Police Officer for 21 years with Tayside Police and now Police Scotland, and has now turned 360 degrees as he is the police contact for Abertay. He regularly attends at Abertay to provide reassurance and advice for students and staff alike.

PechaKucha is a simple quick-fire talking format – presenters show 20 images, each for 20 seconds. PechaKucha, or ‘chit chat’ in Japanese, was developed by Klein Dytham Architecture, in Tokyo back in 2003.

Bell Street and Beyond